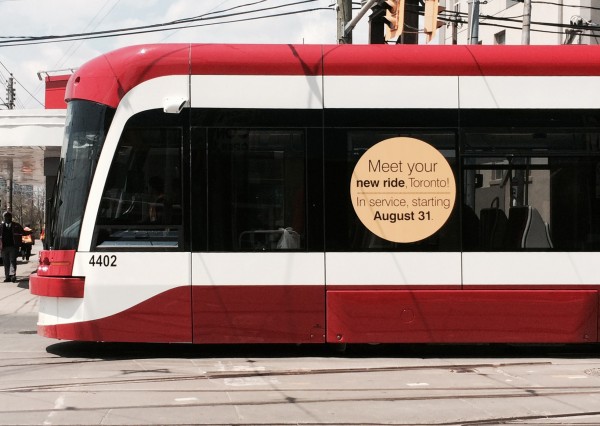 According to the November, 2012, master agreement signed by Metrolinx, the City of Toronto and the TTC, the four-line LRT project included a hefty order for 182 Bombardier “Flexity” LRVs, to be delivered by 2020 – 35 for Sheppard, 76 for the Eglinton Crosstown, 23 for Finch, and 48 for the Scarborough LRT. Some of the vehicles would be housed at a Sheppard Avenue East maintenance and storage facility (MSF) designed to have a capacity of 100 vehicles, but expandable to 135.

The cost for all 182 vehicles came to $770 million, plus HST, says Metrolinx.

Council’s decision last fall to pursue a Scarborough subway meant the 48 LRVs designated to run on the Scarborough LRT corridor — worth about $200 million — were no longer necessary. (At that point, Metrolinx had already spent $11 million on the storage facility, which will have to be downsized because of the move.)

From the early days of the high-stakes debate over the subway conversion, officials repeatedly warned their political masters about the financial risks associated with the cancellation of a quarter of that Bombardier contract, according to documents obtained by Spacing.

A June 10th briefing note prepared by MTO officials for a meeting between Glen Murray and Karen Stintz flagged the “estimation of settlement with Bombardier for a revised vehicle order.”

Then, in mid-to-late June, Metrolinx officials and board members began crafting an ultimatum letter to be delivered to the City of Toronto on June 28, 2013. It would state that council had to clearly articulate its position by August 2, 2013 because Metrolinx was actively making time-sensitive decisions about RFPs related to the Scarborough LRT, the Crosstown and the vehicle storage facility.

The letter, which went through numerous revisions and included input from the premier’s office, was reviewed by Metrolinx’s CFO and its legal counsel, according to FOI documents. The Bombardier contract was clearly one of the concerns to be raised. In a June 27, 2013 email to Metrolinx chair Rob Prichard and CEO Bruce McCuaig, the agency’s general counsel Mary Martin noted six issues relating to any revision of the master agreement, including the Bombardier LRV purchase.

The final version of the letter — which was released on June 28, 2013 and was supported by a detailed internal stakeholder/media relations plan obtained by Spacing – laid out the Bombardier vehicle contract concern in no uncertain terms:

Despite that explicit warning — and Metrolinx’s stated intention of passing along such expenses to the city — the matter of the Bombardier cancellation penalty somehow vanished from view when city council convened on July 16, 2013 to respond to McCuaig’s ultimatum.

A hastily prepared July 12, 2013 staff report on the subway plan pointed to the matter of “vehicle renegotiation costs,” but cited the financial impact as “TBD” — to be determined. In fact, the 24-page report contained not a single explicit mention of the Bombardier LRVs. A table submitted to council outlining the “high level” subway budget of $2.3 billion included a $125 million line-item for “revenue vehicles.”

According to council sources, City staff during the July 16, 2013 council debate didn’t circulate any purple “in camera” documents laying out the potential financial implications of the cancellation penalty. Nor were there councilor motions asking for more information.

Two weeks later, however, McCuaig — in an email written on the eve of the Scarborough-Guildwood by-election and obtained by Spacing — warned city manager Joe Pennachetti to expect further information when council reconvenes in the fall to figure out a strategy for securing funding sources.

“The costs associated with the signed contract with Bombardier for the delivery of light rail vehicles will not be known until negotiations with the company are completed,” he wrote. “We will not pursue these negotiations until we have a final position from City Council.”

Oddly, the question of the Bombardier cancellation penalty has not, in fact, re-surfaced publicly. What’s more, officials with both Metrolinx and the TTC have downplayed the issue, privately saying the calculation is complicated, but noting that the City can extricate itself from financial exposure by finessing future subway procurements with Bombardier. In other words, it’s “let’s make a deal” budgeting.

As for the proposed storage and maintenance facility, which was officially cancelled after council formally changed its in the fall of 2013, Metrolinx officials say the plan at the moment is to develop a new, and smaller, facility for the Sheppard East LRT, with the procurement process slated to begin next year.

The bottom line, however, is that city council – and therefore the public — doesn’t actually know whether or not this piece of the massively expensive Scarborough subway deal will add to the overall price tag, which itself is likely to exceed expectations.

With the province’s blessing, council decided to go ahead, anyway.