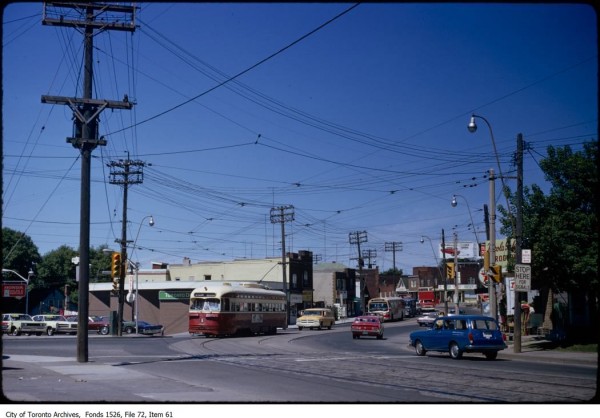 At the end of rush hour, on Friday, July 19, 1974, the Rogers Road streetcar rattled its way east on Rogers Road, Oakwood Avenue, and St. Clair Avenue into St. Clair Carhouse on Wychwood Avenue for the last time. Two days later, early Sunday morning, July 21, the first trolley coach of the new 63F branch of the busy Ossington route made its way from Lansdowne Garage to Bicknell Loop for the trip down to King Street. (Diesel shuttle buses operated that Friday night and all day Saturday.) The abandonment of the Rogers Road streetcar was to be the last permanent “busitution” by the Toronto Transit Commission (TTC), which agreed in 1972 to preserve its remaining streetcar system in 1972. The preservation of a Toronto icon was thanks largely to civic activists and public opposition to  an earlier policy of eliminating all streetcars in the city by 1980. But Rogers Road was the necessary sacrifice.

Rogers Road was one of three new streetcar routes opened in the 1920s northwest of the City of Toronto. The Township of York Railways was established to build and operate (contracted to the TTC) transit services in the rapidly growing suburbs just outside the city limits. The other three TofYR routes were on Dundas Street west of Runnymede, on Oakwood Avenue, and on Weston Road. Rogers and Oakwood were both brand new services established on November 19, 1924, while Weston and Lambton were both former Toronto Suburban Railway routes.

Both the Oakwood and Rogers Road routes started at St. Clair and Oakwood (the loop is still in use for short-turning 512 St. Clair cars); the Rogers Road cars turned west onto its namesake street from Oakwood to a loop at Bicknell Avenue (just east of the CN and CP railway crossing and short of Weston Road) while Oakwood cars continued north on Oakwood and west on Eglinton Avenue to Gilbert Loop, just west of Caledonia Road. Rogers Road cars originally terminated at Dufferin Street; in August 1925, they were extended to the loop at Bicknell Avenue.

The Weston Road route replaced the Toronto Suburban Railway’s Weston-Woodbridge route from Keele and Dundas to the north end of the Village of Weston, while Lambton operated from Runnymede Road and Dundas Street to a loop by the Humber River, near where Lambton House sits today. Lambton was replaced by buses in 1928; low ridership and the construction of the high-level Dundas Street Bridge were responsible for this early abandonment. Weston cars were replaced by trolley buses in 1948; much of the route was single-tracked and required old double-ended streetcars, which the TTC was disposing of across the system.

Oakwood was abandoned in 1960, replaced with an extension of the Ossington trolley coach. By that point, the TTC was then actively moving forward on plans to phase out streetcars in their entirety. However, Rogers Road cars were extended eastward from Oakwood Loop to St. Clair Station during rush hours upon opening of the Yonge Subway in 1954.

The opening of the University-Bloor-Yonge subway project in phases between 1963 and 1968 resulted in the elimination of the Dupont, Coxwell, Parliament, Harbord, Bloor, and Fort carlines and several rush hour streetcar services. By 1967, the TTC adopted an official policy to eliminate the entire street railway by 1980, once a proposed Queen Street subway was completed.

Thanks to public pressure to retain the street railway network (led by the Streetcars for Toronto Committee), two key decisions were made in late 1972 to retain Toronto’s streetcars. On October 25, Toronto City Council unanimously approved a motion to maintain the streetcar system within the city limits; on November 7, TTC commissioners unanimously agreed to maintain the streetcar network within the City of Toronto, abandoning its previous streetcar abandonment policy, and began plans for the procurement of new streetcars. But with a shortage of cars in good condition and pressure from local politicians, one more line would be axed in the meantime.

Being outside the City of Toronto (except for the rush hour extension to St. Clair Station), the Rogers Road service was selected as the last line for abandonment. The Borough of York sought a through service from Bicknell Loop across Weston Road to Jane Street serving Humber Boulevard. It also wanted to fix Rogers Road, though it refused to pay for track work to repair the deteriorating rails and road surface. (The TTC itself funded new streetcar trackage at the west end of the line on Old Weston Road as buses on its 41 Keele route were taking a pounding along that stretch. Orphaned streetcar tracks remained on Rogers Road near Old Weston Road until about 2000.) 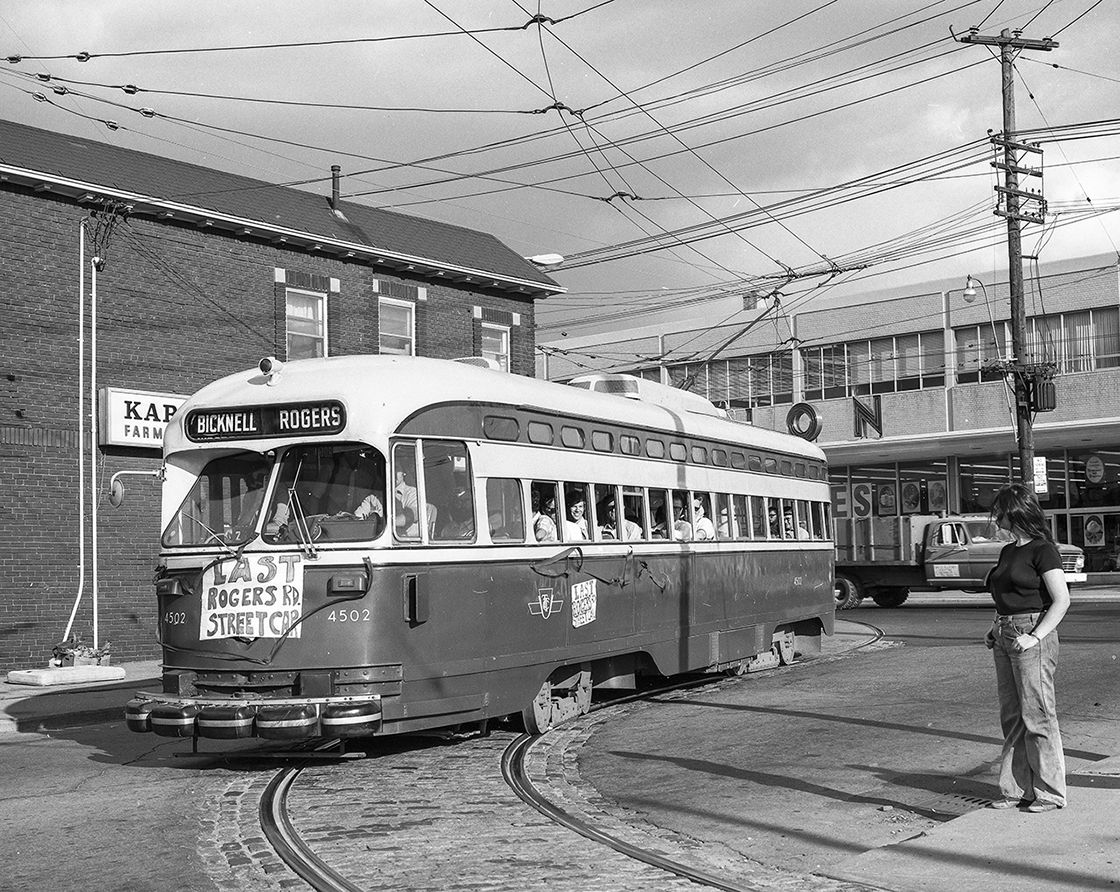 But instead of providing the promised through trolley bus route to Jane Street, the TTC simply installed new double trolley wire from Oakwood Avenue to Bicknell loop for the 63F Ossington via Rogers Road branch. A new diesel bus route introduced earlier that year, 48 Humber Blvd, ran between Jane and Bicknell in the meantime. Only with the 1994 route restructurings that followed the dismantlement of the trolley bus system did the 30-year old promise become fulfilled, when the 48 and 63F buses were combined into the new 161 Rogers Road route.

The loss of the Rogers Road streetcar contributed to the demise of St. Clair (Wychwood) Carhouse as a useful TTC property; it closed as an active carhouse in 1978, and was last used by the Commission to store retired PCC streetcars before they were sent to the scrapper’s. It is now, of course, the successful Artscape Wychwood Barns. 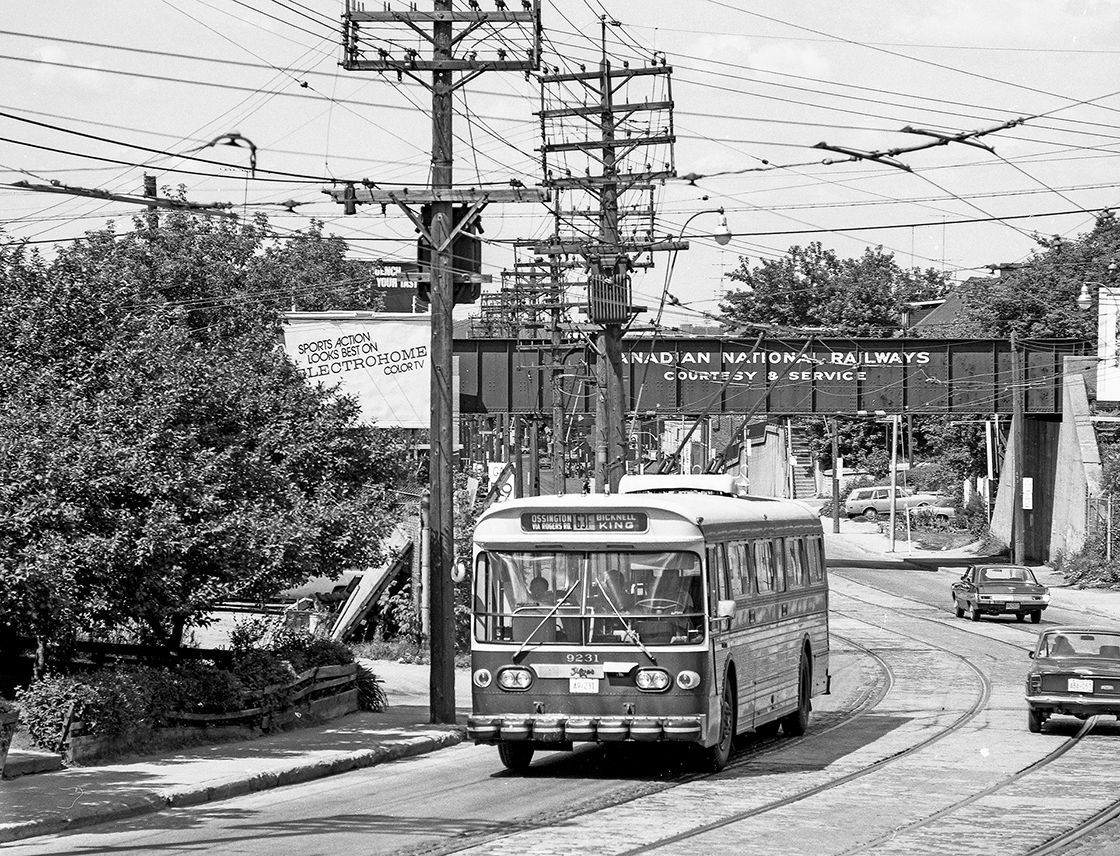 As it turned out, Rogers Road wasn’t the last streetcar route abandoned by the TTC either. In 1975, streetcar service on St. Clair Avenue and Mount Pleasant Road was split into eastern and western routes at St. Clair Station; the new Mount Pleasant streetcar would take over the less-busy eastern portion of the St. Clair streetcar to the loop at Mount Pleasant and Eglinton. But the Metro Roads Department was looking to rebuild the bridge over the former Belt Line Railway at Merton Street, and streetcar service was suspended starting July 25, 1976, with shuttle buses replacing streetcars. This arrangement became permanent despite community opposition, and the 74 Mount Pleasant trolley bus route was inaugurated in 1977. That route would see service cuts and dieselization in the 1990s.

The author is grateful to John F. Bromley and Steve Munro for their assistance.