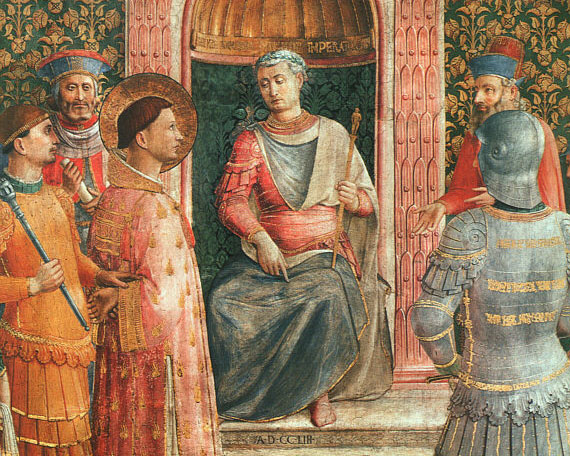 St. Lawrence (with halo) before St. Valerianus by Fra Angelico.

Old Toronto was a city of saints. Their names were stitched into the fabric of the community by the first settlers from the British Isles, starting in the early 1800s. Thanks to them, Toronto’s first political divisions and neighbourhoods were named for the patron saints of England, Wales, Scotland, Ireland, and, thanks to a quirk of timing, the patron saint of librarians, miners, and students.

This saintly history is most clearly visible on the Toronto subway map, where several of the old wards were enshrined in the names of stations, particularly on the University line. Elsewhere, the saints live on in the names of city markets and older civic buildings. But who were the saints of Toronto, and what did they do to earn such veneration? Here’s a handy guide to Toronto’s most holy and virtuous.

St. Lawrence of Rome’s association with Canada began when French explorer Jaques Cartier sailed up the country’s mighty eastern river in 1535 with the help of two Iroquoian guides. The trip began on 10th August, the feast day of St. Lawrence, and so Cartier named the river for the man who, according to lore, spirited away the chalice used during Christ’s last supper—the Holy Grail—to Spain for safekeeping, among other deeds. He was burnt to death around the year 262.

The Toronto connection arrived early with the naming of St. Lawrence Ward, the area that gave the city the St. Lawrence Market and St. Lawrence Hall,  in the 1830s. Today, St. Lawrence of Rome is recognized as a patron saint of Canada, and also of librarians, chefs, miners, and students.

Miracles: Fed hungry workmen for 10 days with a single loaf of bread after a despairing builder prayed to him for help.

The odd one of the bunch, the story of Toronto’s St. Clair is one of misspelling and confusion. According to authors Leonard Wise and Allan Gould in Toronto Street Names, the east-west thoroughfare got its name from “St. Clare,” a character in anti-slavery novel Uncle Tom’s Cabin. The story, which sounds a little too neat and tidy, goes like this: local boy Albert Grainger liked the name so much he adopted it as a middle name and wrote it, incorrectly, as St. Clair on a signpost at his parents’ farm near Avenue Rd. and St. Clair. Surveyors later mistook it for an official name and, somehow, it stuck.

Going back a little further, the Uncle Tom’s Cabin character was perhaps named for an Italian saint and follower of St. Francis of Assisi in the 13th century who founded an order of nuns that gave up all rights to property and begged for alms.

Miracles (of the Italian St. Clair): Saved a child from the ravages of a hungry wolf. 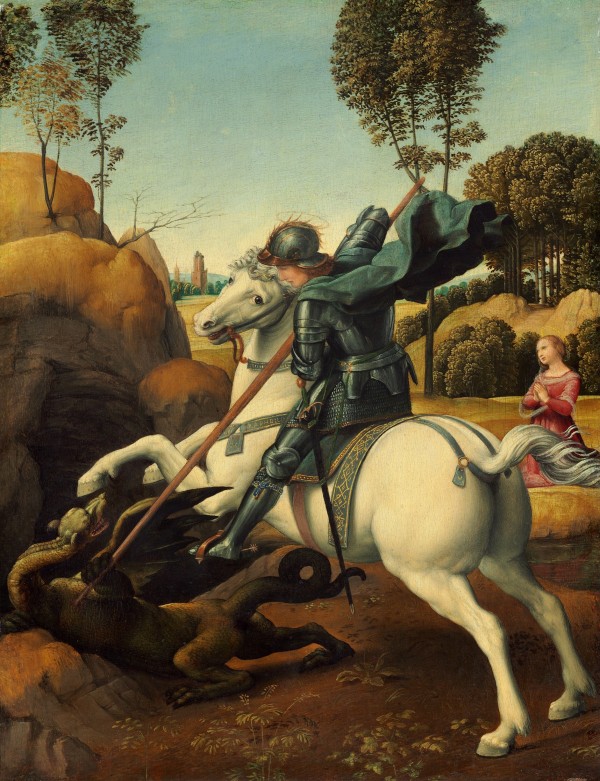 St. George and the Dragon by Raphael.

St. George’s contemporary associations with Toronto are circuitous. This city’s now defunct waterfront St. George’s ward was named for the patron saint of England (and many, many other countries,) but the street and subway station appear to have been named for Laurent Quetton St. George, an exiled French royalist who adopted his last name in England on April 23, the feast day of St. George.

In Canada, Quetton St. George befriended Dr. William Baldwin, the architect of Spadina Ave., who named a side street for him and, by extension, England’s patron saint. The original St. George’s most celebrated deed was slaying a (likely metaphorical) dragon—perhaps some sort of water dwelling beast—somewhere in North Africa between 280 and 303 AD.

Miracles: Apart from killing the dragon, St. George is credited with raising at least one person from the dead.

These days, poor old St. Patrick might as well be the patron saint of Guinness and “kiss me, I’m Irish” t-shirts. His subway stop is located at what used to be the corner of St. Patrick St. (which was merged with several other streets to form Dundas) and University Ave. in the heart of the old St. Patrick’s Ward.

St. Patrick was born in Great Britain and sold into slavery in Ireland, where he lived for six years before escaping and returning home. He returned to Ireland in later life and is credited with driving all snakes out of the Emerald Isle (even if contemporary science says there never were any serpents to banish.)

Miracles: Banishing the snakes was St. Patrick’s most famous deed, though he is also credited with making himself and several followers appear as deer to would-be attackers. 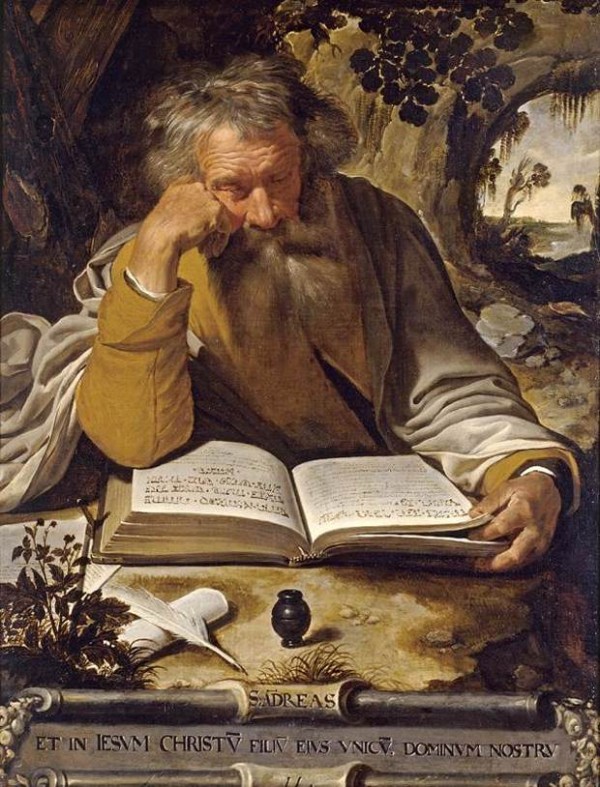 Biblical St. Andrew is mentioned in the New Testament as a close disciple of Jesus. He was said to have been present at several important events, including the Feeding of the Multitude and the Last Supper. In Leonardo da Vinci’s famous painting, Andrew is seated four left of Jesus, his hands raised in surprise.

Andrew’s connection to Toronto comes thanks to his patronage of Scotland. Historically, St. Andrew’s Ward was a narrow strip between Queen and King streets from Dufferin in the west to Yonge in the east. The area gave its name to the church, a long lost market, and the subway station at King and University, which maintains a blue and white colour scheme for the flag of Scotland.

Miracles: Freed a man from shackles and raised a child from the dead.