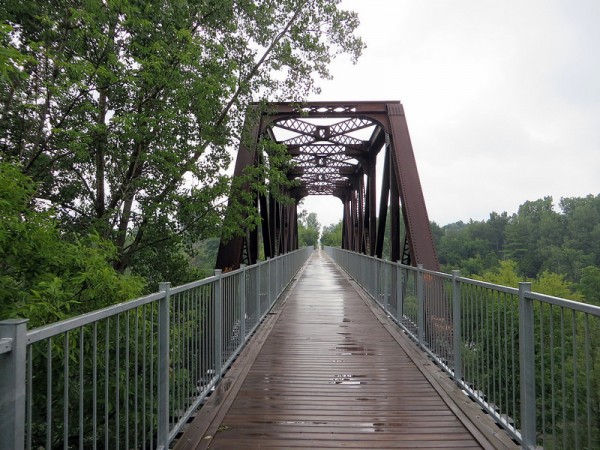 In mid-July, I completed another overnight cycling trip. On a bright and warm Friday, I biked from Hamilton to Port Dover via Caledonia. On an overcast and rather soggy Saturday, I rode back to Hamilton, via a longer route through Simcoe and Brantford. Along the way, I cycled on some of Ontario’s best rail trails, and one of the first bicycle-friendly paved shoulders on a provincial highway. From Hamilton to Port Dover via Caledonia (a 76-kilometre ride) just under half the ride was on off-road trails, while the longer return trip via Brantford was almost entirely competed following rail trails.

Unlike Quebec, which has a comprehensive province-wide cycling program, including the 5000-kilometre Route Verte network, Ontario’s bike routes are organized and maintained entirely by local municipalities and conservation authorities. Networks are only found in a few select regions. In Hamilton/Kitchener/Port Dover, Caledon/Erin, and in the Peterborough/Kawartha region, there are lengthy, connected rail trails which are all suitable for cycling. Niagara Region has a 140-kilometre-long Circle Route beside the Welland Canal and the Niagara River. But elsewhere in Ontario, designated cycling routes are almost non-existent; the few off-road trails that exist do not connect with others. Few highways and county roads have paved shoulders for cyclists’ use. Quebec has understood the opportunities that bicycle tourism provides.

It is time for Ontario to do the same.

As has become my custom on these longer rides, I used GO Transit’s bike racks on its buses to transport my bicycle and myself to and from Toronto. My trip began at Hamilton’s splendid Art Deco GO station, opened by the Toronto-Hamilton-Buffalo Railway in 1933. Nearby, the Escarpment Rail Trail — part of a former Canadian National line to Caledonia and Port Dover — begins its gentle climb of the Niagara Escarpment, ending at a point near Albion Falls, one of dozens of waterfalls found in the Steel City. A footbridge spans the Lincoln Alexander Parkway (whose construction cut through the old CN railbed) and one must take Stone Church Road (thankfully, with bike lanes) to resume cycling south via the rail trail.

Just this year, Haldimand County extended the Chippewa Rail Trail south from Haldibrook Road (the City of Hamilton/Haldimand County border) closer to Caledonia, though the trail does not continue all the way into town. South of Caledonia, the old CN Hagersville Subdivision remains in service to serve industries in Nanticoke, so the rail trail comes to an end. I took (mostly) quiet country roads (such as McKenzie Road, which was recently reconstructed with paved shoulders) on a meandering path between Caledonia and Jarvis, avoiding heavy traffic. This route could have been better marked as a safe long-distance cycling route. 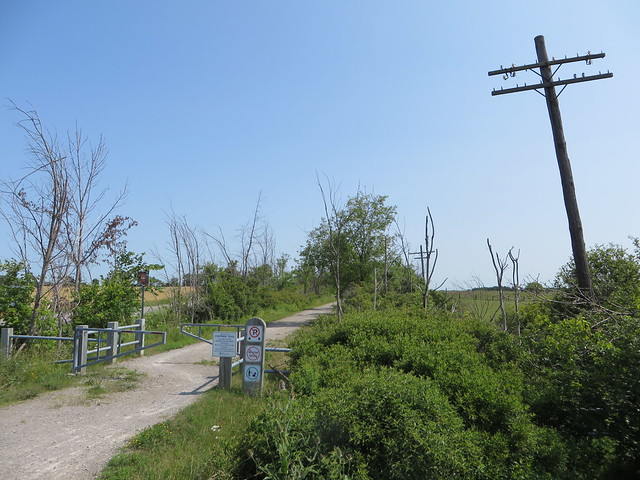 Bare telegraph poles along Chippewa Rail Trail at Hamilton/Haldimand border are relics of trail’s former status as a railway line. 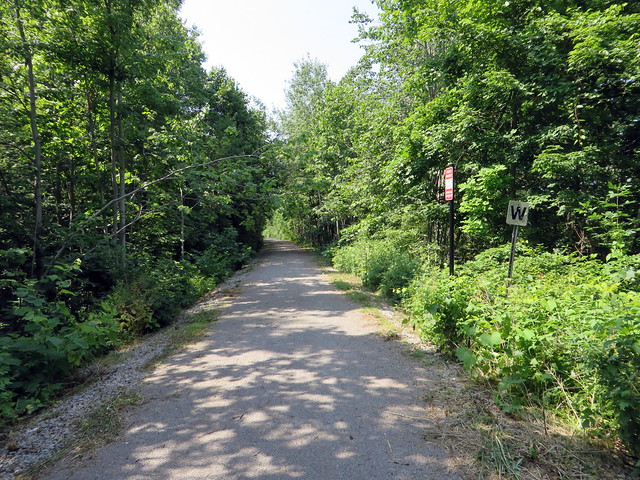 On the new HaldimandCounty section of thhe Chippewa Trail, an old railway whistlepost sign still stands, another subtle reminder of the corridor’s former use.

Between Jarvis and Port Dover, there’s a new and rare sight — fully paved shoulders along a provincial highway. The Ministry of Transportation (MTO) recently rehabilitated Highway 6 south of Jarvis, and at the request of the mayors of both Norfolk and Haldimand Counties, it agreed to install the paved shoulders specifically to benefit cyclists. It remains one of the only sections of provincial highways in Ontario that is bicycle-friendly. 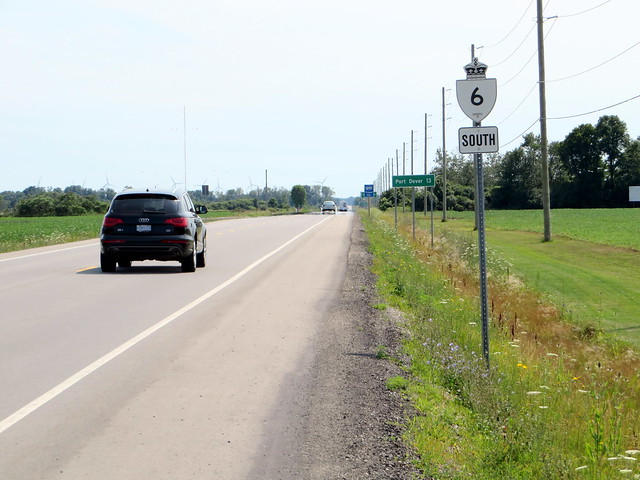 I stayed at a bed-and-breakfast in Port Dover (one type of businesses that should benefit from a co-ordinated cycling strategy). The town of Port Dover is quite charming, if not a bit touristy. It is still an active freshwater fishery, and several restaurants and stands sell locally-caught perch from Lake Erie. (It isn’t worth the ride just to try the perch, but one can do worse for dinner.) One waterfront restaurant plants palm trees every summer along the small, popular beach. Nearby there’s a memorial to lost fishermen, a reminder of dangers of fishing on the Great Lakes. 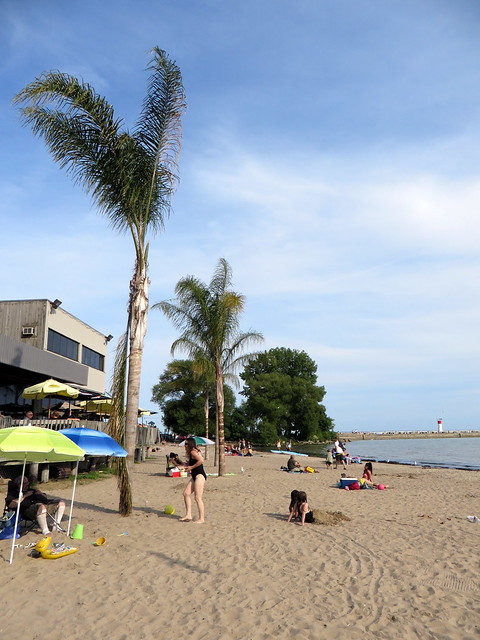 The next day greeted me with light rain, which was off and on all the way back to Hamilton. Despite the poor weather, there was enough delights along the way. The trail north from Port Dover to Brantford follows three different railways — the former CN Otterville Subdivision to Simcoe, and portions of the former Lake Erie and Northern Railway (LE&N, part of Canadian Pacific’s electric railway network in Midwestern Ontario) and the Toronto, Hamilton and Buffalo’s (TH&B) line between Hamilton and Waterford. Both Norfolk County and Brant provide excellent wayfinding signage; Brant even paved its portion of the trail into Brantford (where it continues to the Telephone City’s downtown core) and provides interpretive signage, pointing out features along the way. There are trail maps at most major road crossings. 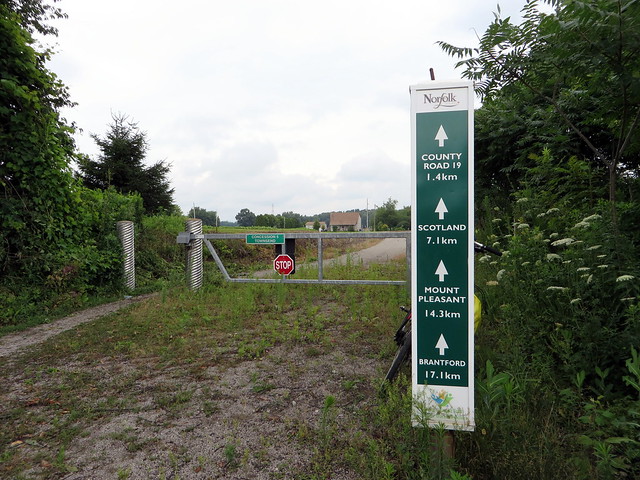 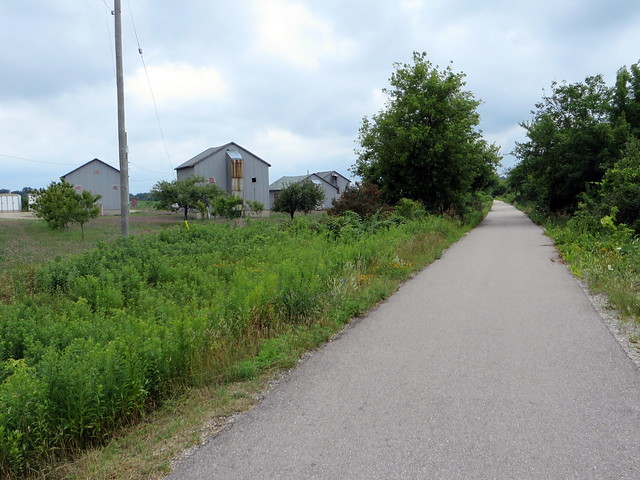 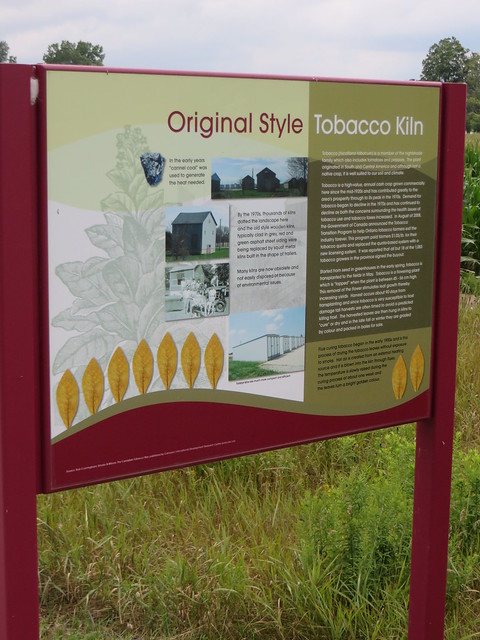 The scenic highlight of Saturday’s ride was the Black Bridge trestle in Waterford (the lead photo), which carried the Lake Erie and Northern over two other abandoned railways — the double-tracked Canada Southern (built by the New York Central Railroad as a shortcut between Buffalo and Detroit and eventually abandoned by CN) and the Toronto, Hamilton and Buffalo, a joint venture between CP and NYCRR. The CASO route would have made for a fine rail trail all the way from Niagara to Windsor, but parts of the right of way has already been sold off to adjacent landowners. 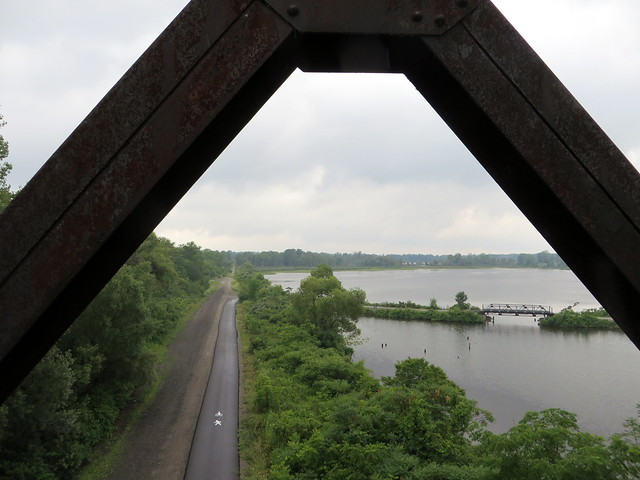 Junction of the once-mighty Canada Southern (CASO) and TH&B Railways from the Waterford Black Bridge, with carried the LE&N.