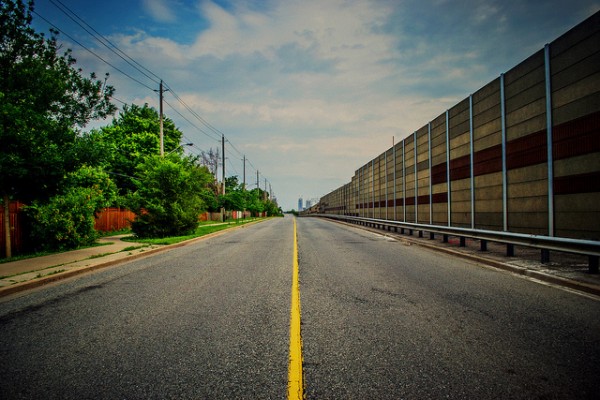 My childhood was spent surrounded by the Humber River and grocery stores.

I live in Rexdale, where there’s not much to do and every reason to leave. For the first decade of my life, north Etobicoke was my world. My family were immigrants who arrived in Toronto in 1997. We settled in west Rexdale, in an apartment complex nestled beside the Humber River Valley, which was a five-minute bus ride away from a nearby school that my sister and I attended. Years later, we moved further east, still in Rexdale, but closer to older developments near Kipling Avenue. The only way to get around was by car.

When I entered high school is when my world expanded. I had two public transportation options — either a 30-minute TTC bus ride east to the Yonge-University line or a 25-minute bus ride south to the Bloor-Danforth line. The 45 Kipling bus that runs north and south on the busy west-end avenue became my way out of the barren, plaza- and parking lot-laden landscape I had grown up in.

Many of the friends I made in Etobicoke exclaimed “Me too!” when I told them I live in the borough but I would quickly have to clarify with a “but way up north…in Rexdale,” to which I’d receive a confused “oh…” I might as well have said I live in Narnia. The result of this disconnect was a jarring feeling of misplaced identity within this city. I envied friends who lived in the south and could walk to Tom’s Dairy Freeze — a community staple on the Queensway — or could access streetcars and subway stations a relatively short distance away from their homes. It wasn’t downtown, by any means, but it was more of a bustling and central area than I had ever previously experienced.

The reason for this is because south Etobicoke’s lakefront was home to several communities, supported by industrial enterprises. The townships of Mimico, Long Branch, and New Toronto are the oldest parts of Etobicoke, formed around 1890. The neighbourhoods were created on a rigid street grid, where everything was plotted close together, serving the working class residents. The industrial boom is now over, and the area’s number-named streets offer residents walkability in an era where it is now desirable.

The circumstances of the development of south Etobicoke differ vastly from how the northern settlements came to be. The north is much younger. It was mostly farmland and empty fields until post World War II, when housing was built to accommodate returning veterans. There was an influx of Italian immigrants from the 50s to the 70s, resulting in single-family homes built along twisting, winding roads ending in cul-de-sacs. The neighbourhoods were built for the era of the car — everything was placed further apart than it is in south Etobicoke. “The layout of the neighbourhood makes it really hard to create a close-knit community,” says Andray Domise, a Rexdale advocate and former Ward 2 candidate in the last City Council election. The south, he says, lends itself to communities tied together by history and the physically close layout.

When the post-war housing boom was over, development in north Etobicoke slowed down. What was left was a suburban landscape of bungalows, a smattering of social housing, strip-malls, apartment tower communities, and a few condo complexes. Affordable housing attracted immigrants and new Canadians. A huge influx of South Asian immigrants flocked to the north end of the borough between 1996 and 2006. “It comes back to housing type and land-use and the fact that this is just such an expensive city for people to live in,” says Cheryl Teelucksingh, a sociology professor at Ryerson University.

The effects of this ethnic enclave are seen all over north Etobicoke. The Albion and Islington intersection, which is part of the Thistletown neighbourhood, houses plazas full of stores selling South Asian groceries and traditional clothing, interspersed among restaurants. The area is a reflection of the needs of the population and could give Little India on Gerrard St. E. a run for its money. All it lacks is the relative walkability of downtown and the charm of historic buildings.

There are pockets of culture and activity like this spread out across north Etobicoke. Southern Rexdale attracted a large Somali population. The high immigrant population and the lack of investment in the area point to David Hulchanski’s theory of Toronto being made of three cities. City Three has the lowest income and is home mostly to immigrants and can be found in the northwestern and northeastern parts of Toronto, including north Etobicoke. South Etobicoke is City One, according to Hulchanski’s theory, meaning its inhabitants have higher incomes. Over the 35-year period of Hulchanski’s study, the number of immigrants in City Three rose from 31% of the population in 1970 to 61% in 2006.

Hulchanski’s study also noted that people living in City Three have to travel furthest to find employment but they have the least access to TTC. Only 19 of 68 subway stations are within or near neighbourhoods in City Three. Etobicoke has access to three — Kipling, Islington and Royal York stations. They are all in the south. At the time they were built, they were considered to be contributing to urban sprawl.

At least build a community centre

The plague of low-density sprawl afflicting the suburbs remains relatively the same today. As John Sewell wrote in The Shape of the Suburbs, “because the urban densities were so low, it was not cost effective to serve suburban areas with good transit.” This is an entirely logical argument, of course, but it’s an unfortunate one for the thousands of people living in Etobicoke — especially the north — that do use public transit. South Etobicoke’s transit is definitely lacking compared to the rest of Toronto but is a godsend compared to the north. The Queen streetcar, the GO stations and relative closeness to the subway make for a shorter commute time. The north is less accessible by transit and, as Domise says, that the longer commute times contribute to the general atmosphere of the area. “It’s small things like that that end up chipping away at your day … by the time you get home you’re exhausted and don’t want to do anything else,” he says. The isolation caused by being so poorly connected to the city contributes to a cycle, he adds. Community members are reluctant to challenge the status quo because City Hall is literally too far away to access for transit users that can’t afford to skip a day of work, or have to go home right after their work day is over if only because it takes so long to get there.

“The community has developed organically between neighbours because of cultural backgrounds and because their kids go to school together. But as far as what the city has planned, what the local councillors have tried to create in the area, there’s no general meeting place. There’s no place where people can all get together and discuss issues,” says Domise.

Urban affairs reporter Christopher Hume wrote about the state of Rexdale in 2006 in his Toronto Star article, titled “At least build a community centre.” It seems that in nearly ten years nothing has changed. City planner Bill Kiru says that there isn’t much money being invested in north Etobicoke. Some investment went into the area when it was named a priority neighbourhood in 2005 and now Albion Library is getting a makeover. However, for the most part, the City’s areas of interest currently lie in the rejuvenation of some problematic areas of central Etobicoke that have potential. There are plans to revamp Six Points interchange, the messy intersections of Bloor, Dundas and Kipling Avenue, also  affectionately called Spaghetti Junction. The reconfiguration would untangle the streets, transforming the area into a mixed-use pedestrian-friendly city centre. There are also plans being considered for parts of Mimico in the south. Redevelopments to this extent aren’t planned in the north.

Domise says that north Etobicoke is a “geographical lily pad” — a place where younger people come to attend Humber College’s north campus, but have no intention to stay. The effects of this lack of retention and the bleeding of resources and economy can be seen nearby. Woodbine Centre, for instance, used to be a bustling mall and a booming source of revenue and good times in Rexdale. Indeed, it used to be one of my family’s favourite haunts in the early 2000s. Now it’s home to empty storefronts and a quick turnover.

Kiru says that development in the city has historically migrated north. In time, we will see investment in north Etobicoke, he says. Metrolinx’s proposed Finch West LRT will service some of north Etobicoke. He estimates that the attraction of transit will bring with it revival. He adds that the main ways to change the feel of north Etobicoke is to add greenery and street furniture to its arterial roads. The differences between north and south Etobicoke are difficult to wrap one’s head around. It’s hard to believe they are, on paper and on a map, technically a bound entity. The two ends were historically built for different purposes but now serve the same — to be a home for its inhabitants. The roads may always be wider in the north and its history not as rich as its southern counterpart, but there is potential abound.