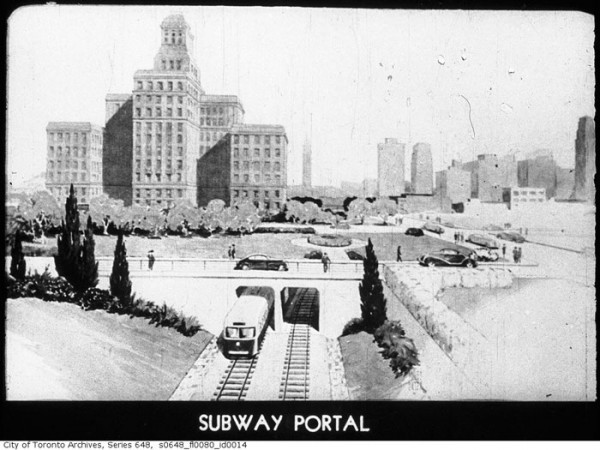 Artist rendering showing a streetcar exiting a tunnel on the proposed Queen line, west of University Ave. The Canada Life building is in the background.

Toronto is building the East Bayfront LRT. Well, sort of.

This week, Metro News reported that the City of Toronto has set aside $2 million to “rough in” an light rail station in the basement of a proposed 45-storey tower near Union Station. The basic structure, which will be located in the parking garage of the new building, may become part of the East Bayfront LRT, if the long-anticipated line is ever funded.

It’s not the first time the city and the TTC has made an allowance for unfunded future transit lines. In fact, since construction of the Yonge Street subway in the 1950s, there have been at least three such projects. So far, none have ever subsequently proved useful. 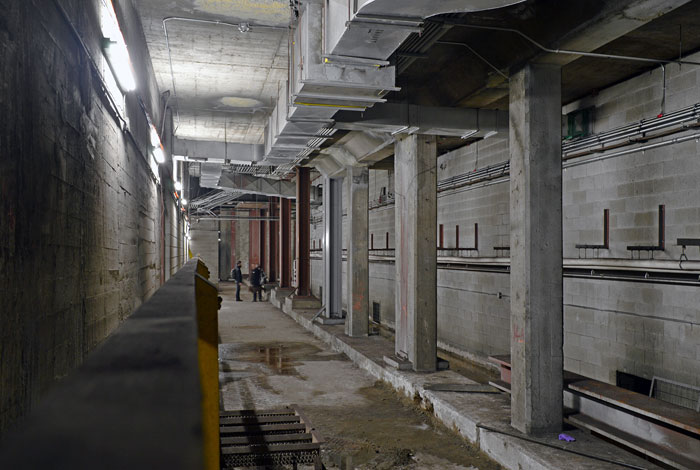 Looking west through the shell of Lower Queen station in March 2014. The vertical columns would have separated the east and westbound tracks.

The earliest and best-known rough-in project among Toronto transit watchers is the unfinished streetcar stop beneath Queen subway station. In the 1940s, before Bloor St. and Danforth Ave. were selected as the route of the city’s east-west subway, the TTC planned to bury the Queen streetcar line in the downtown core.

The Queen subway would have resembled Boston’s subterranean streetcar lines, likely running in an open trench west of University with stops at Trinity-Bellwoods, Bathurst, Spadina, and John, before dipping underground to connect with Osgoode and Queen subway stations. East of Church, the line would re-surface and continue in an open cut to Logan Ave.

During construction of the Yonge line, the TTC actually built the basic shell of the underground streetcar station beneath the subway tracks at Queen. The platforms and track beds were installed at a cost of about $500,000, but little other work was done. No rails were laid and no tiles were grouted to the walls.

Eventually, the city and the TTC’s focus shifted north and the Bloor-Danforth line was built instead. The shell of Lower Queen (it was sometimes called “City Hall” on planning documents) is now only accessible via an anonymous door off the underpass beneath the northbound and southbound platforms at Queen. 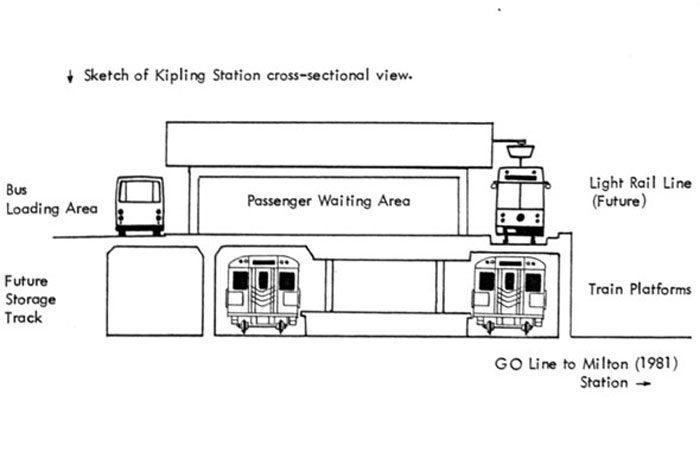 Diagram showing how the upper level of Kipling station was designed to handle buses and light rail.

Another conspicuous TTC rough-in is easy to spot at Kipling station. On the upper level, directly opposite the bus bays, there’s an area designed to carry a streetcar or light rail track. It was built in the late 1970s in anticipation of a light rail line to the airport that never arrived.

A decade earlier, in 1969, the TTC envisioned bookending its east-west subway line with two light rail lines. In Etobicoke, streetcars would have run along north along a hydro corridor to the Highway 427 and 401 interchange in a dedicated right of way before turning west into Pearson.

If it had been built, it might have ended up looking like the Scarborough RT, which was conceived at the same time and likewise initially designed to use streetcars. (The province convinced the TTC to ditch the streetcars for its own high-tech ICTS trains. Before that decision was made, the RT was being built to run the same surface rail vehicles used elsewhere in the city tethered together in a train.)

For more unused TTC architecture, one must head back underground and travel to Sheppard-Yonge station. Between the two tracks on the upper level, there’s an unfinished concrete structure designed to be used as a boarding area should the number of riders at the station ever outstrip the existing platform space. 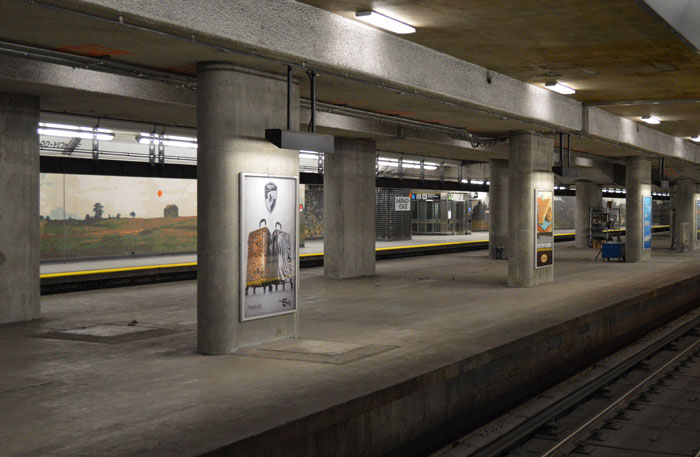 The roughed-in centre platform at Sheppard-Yonge station. The TTC says it won’t see use unless passenger numbers drastically increase.

Right now, that’s unlikely. Sheppard-Yonge might be the third busiest stop on the Toronto subway, but it’s still some way from needing additional platform space. When the platform was built, it was still possible the Sheppard line would be extended west to meet the Spadina line. Shifting transit priorities have, for now, put paid to that idea.

Ironically, one place where the city declined to rough in a station was precisely where it ended up having to build one in the 1980s.

In 1970, when the city was busily extending the Yonge line north to Finch, the sprawling borough of North York was planning to build itself a “downtown” at Yonge and Park Home Avenue. Metro council was told for an additional $850,000, subway builders could leave left a bulge in the tunnel at North York Centre that could later be turned into a station.

Despite the potential for future savings, Metro balked at the idea. An attempt to have the decision revisited in 1971 also fell flat. “North York has been tripped up again by our own double talk,” the borough’s controller Paul Hunt told the Globe and Mail. “On one hand we say we don’t want redevelopment and on the other we say to make provisions for redevelopment.” 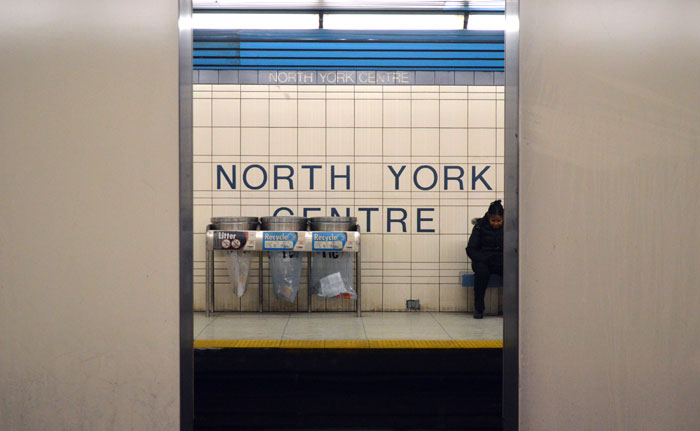 The walls between the tracks at North York Centre are especially thick because the station was excavated out of an existing tunnel.

Construction on North York Centre station began 14 years later, minus any of the help roughing in would have provided. Cutting the station into a section of tunnel posed a unique engineering challenge, and as such the platform area looks decidedly different to others on the Toronto subway.

Most conspicuously, the central structural supports that separate the north and southbound tracks are unusually thick and wide at North York Centre, making it hard to peek at passengers on the opposite side.

The final cost of retrofitting the station was $25 million in 1987.

It’s not clear what the Bay Street East Bayfront LRT platform box will look like, or whether it will ever see use.

If history is any guide, chances are it won’t.