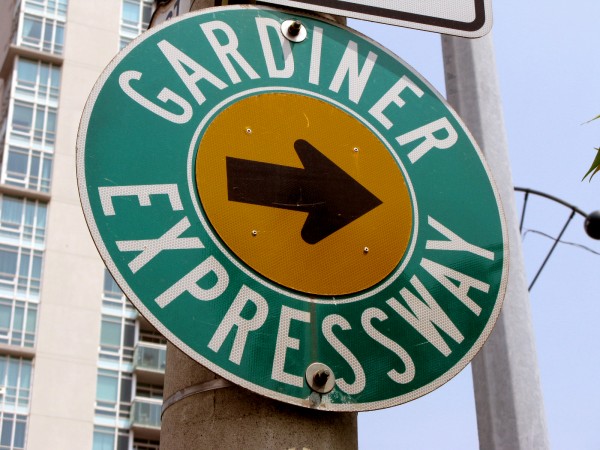 The Gardiner East Follies returns for yet another extended run at City Hall beginning on Tuesday morning, when city officials present three scenarios for relocating the highway’s eastern end to free up valuable waterfront land.

For much of this year, and some of 2014, the lion’s share of public, policy and political attention has focused intensively on the stretch between Cherry Street and the Don River. (For more on the origins of the problematic loop, read this.)

First Gulf, which wants to transform the sprawling Lever Brothers site into Toronto’s Canary Wharf, has a strong interest in the alignment of the Gardiner/DVP interchange, as do the developers who own land along the Keating Channel. In a show last spring, suburban councillors pushed to keep the highway network in tact, while downtowners fought to replace that one portion with an at-grade boulevard.

After council backed the hybrid option, staff spent the summer consulting with waterfront activists, developers and engineers to figure out how to pull the Gardiner north towards the railway yard while re-conceptualizing the interchange as a set of ramps between two highways instead of a single continuous route.

The arm-waving about the interchange, however, has meant that almost no one is paying attention to that nasty segment of the Gardiner that runs astride Lakeshore Blvd East, between Jarvis and Cherry. Indeed, the latest city staff report notes that the section west of Cherry “will largely be maintained.”

And therein lies a massive missed opportunity, according to architect and planner Calvin Brook.

His firm, Brook McIlroy, has pitched city staff on an ambitious scheme to stack that stretch of the Gardiner above an expanded rail corridor as a means of creating a kilometre-long elevated linear park, 3.3 hectares of new developable city land and a fresh lease on life for Lakeshore Blvd East.

The plan [download it from DropBox] will be presented briefly during tomorrow’s committee meeting; city officials are sufficiently interested that they’ve commissioned a cost-benefit evaluation. Brook McIlroy’s consultants, meanwhile, estimate that the capital outlay for that new Gardiner segment will be $316 million — an amount that would be offset by land sales on 4.3 million sq.-ft of freed-up space.

Brook, who has been pondering how to unstack the Gardiner and the Lakeshore for many years, explained his proposal to Spacing last week.

Metrolinx, he says, plans to expand its GO service from 400 trains per day to over 1,000 as the agency moves to an electrified regional rail offering over the next 15 years. That means adding tracks through the Union Station corridor, and therefore widening the railway berm that has long been implicated in the waterfront’s poor accessibility. The city owns a long finger of land south of the tracks between Jarvis and Cherry, as well as the land beneath the Gardiner and the Lakeshore; the three slices are almost 70 metres across in some places.

If the City and Metrolinx can align their construction agendas, Brook says, they could expand the existing berm south to create not only additional track space, but a deck above the new tracks, upon which the four-lane Gardiner could run. The highway portion, in turn, could also be decked, creating a linear park overhead. 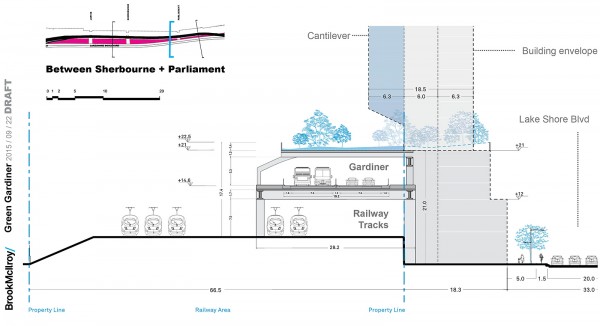 “The premise of this is very simple,” he states. “It’s to take two interruptions in the fabric of the city and turn them into one.”

Brooks points to several compelling arguments in favour of re-building the eastern Gardiner in this way:

Brook points out that the linear park will be roughly at the same vertical elevation as the deck of the current Gardiner, so this extended structure won’t serve as yet another visual barrier. “What’s really important is that it’s very porous in a north-south direction,” he says, with easy pedestrian/cyclist access between Lakeshore, the linear park and gateway points on the other side of the corridor. 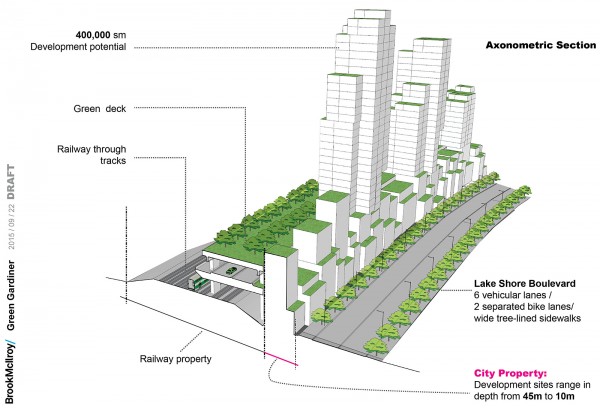 He also observes that Oxford, the Canadian commercial development giant, has deployed new decking technology at its sprawling Hudson Yards project in mid-town Manhattan, allowing an active commuter rail yard to continue functioning while a massive intensification project is constructed directly above it.

The idea requires both political will, but also a leap of faith — not because it is technically complex or financially outrageous, but rather due to the fact that Toronto, with its incrementalist political culture, has long tended to shun big moves.

Yet the railway berm, constructed back in the 1920s to modernize access to an industrializing waterfront, was a big move, as was the construction of the Gardiner in the mid-1950s. Big moves, one could argue, must be met with other big moves. And that’s what Brook will be proposing tomorrow.

With the Gardiner East EA due to be submitted to the province by next spring, municipal and provincial politicians should listen to Brook because his idea is not only plausible; it has the potential to be transformational in a highly challenged geography that requires us, finally, to make no (more) little plans.