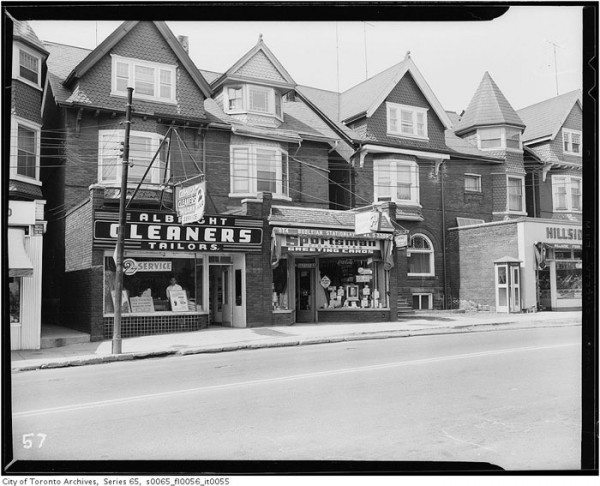 Before the founding of the republic, Rathnelly Ave. residents opposed construction of a supermarket on Avenue Rd.

To celebrate the Centennial, on Saturday, June 10,  1967, the roughly 400 residents of Rathnelly Ave. and several nearby streets decided to quit Toronto and Canada.

The Toronto Star broke word of the new country on the front page the following Monday.

“[Rathnelly] seceded in a bloodless, post-breakfast coup and seized control of the five blocks west of Avenue Rd. and north of the Davenport Rd. tracks,” the paper said.

A small army—the Republic of Rathnelly Irregulars, which was made up of uniformed kids— claimed a nearby park and renamed it Freedom Square. A space rocket fleet made out of cardboard was assembled on one of the front lawns, and barricades went up at the end of the street, closing it to traffic.

The street festival-cum-declaration of independence even received a visit from Mayor William Dennison and Metro Controller Margaret Campbell, and the two governments officially entered into talks.

“As tankards of Rathnellian mead—the republic’s only liquid assets—were handed round, statesman met statesman in an attempt to hammer out a treaty,” wrote the Star. In the end, the two sides reached an agreement, and the Republic of Rathnelly peacefully rejoined the city and country at midnight.

But that wasn’t the end of the tree-lined street’s novelty bid for independence. In February, 1969, the street seceded again during its annual Winter Games. Residents of the street lit bonfires, sipped mulled wine, and elected a government, including of a Minister of Protest and a Minister of External Affairs.

“We’re boozing and dancing in the streets—that’s something they don’t allow in Toronto,” resident Norman Cooper told the Star.

Apart from the obvious fun, the Republic of Rathnelly served a useful purpose in uniting the neighbourhood. By forming a little country, the Rathnelly Area Residents’ Association brought neighbours together and attracted attention to local issues.

When the Spadina and Crosstown expressway projects threatened to carve up their nation, the residents passionately deputized before Metro Council. When a lack of play space frustrated local kids, the army “invaded” the nearby Poplar Plains pumping station, ceremonially claiming the keys from superintendent Lee Norgate.

In response, city’s parks and recreation committee agreed to develop a portion of the pumping station property as a playground as long as Rathnelly payed for the equipment. (The leaders of the republic later unsuccessfully petitioned the Canadian government for “foreign aid” to help pay for the structures.)

Collecting “taxes” (actually dues for the residents’ association) gave residents a pool of money to use in their battles.

“I think it got started over a drunken bridge table one night,” Mrs. Peter Marani, who lived at No. 3, told the Star.

She said the idea came from the plot of the movie Passport to Pimlico, which was itself inspired by the Canadian government’s wartime decision to temporarily declare the maternity ward of Ottawa Civic Hospital international territory for the birth of Princess Margriet of the Netherlands.

Princess Margriet’s parents, Queen Juliana and Prince Bernhard, were living in Canada while the Netherlands was occupied by Nazi Germany. Had Margriet been born in Canada, her claim to the Dutch throne could have been jeopardized, so the government briefly ceded its claim to the ward, making it international territory.

By 1970, little Rathnelly had appointed local alderman David Rotenburg ambassador to City Hall and begun issuing passports. The republic even held an Expo in which many of the homes were decorated in the style of various countries around the world.

Unusually for a republic, Rathnelly had a queen and a president. Eileen Robertson at No. 30 was crowned monarch in the 1960s and Ambrose Small, a Toronto opera impresario whose mysterious disappearance in 1919 became a national sensation, was elected the first leader, beating out a guinea pig and a poodle named Bubbles.

Rathnelly had a coat of arms featuring a martini glasses, a railroad track, an Expo symbol, and a drawing of the local street layout. The flag was red, yellow, and beige with a red border and an image of a fort. “Rathnelly in Irish means fort,” Queen Eileen I told the Star.

Aged 97, Rathnelly’s monarch was still on the throne in May, 1986. She took a consort, local architect Jim Acland, in 1975 and continued to observe Rathnelly Day each year.

The annual celebration will mark its 50th anniversary next year.

In 2012, in honour of its rebellious history, the Republic of Rathnelly received special City of Toronto road signs bearing the country’s name and coat-of-arms. Like the Annex, Leslieville and other bona fide neighbourhoods, the city provided the little territory a measure of official recognition.

Many of its citizens have now passed away or moved, but the legacy of the republic’s community activism lives on. The Poplar Plains pumping station still has play equipment and the Spadina and Crosstown expressways never made it south of Eglinton Ave.

“It’s like a village in the centre of a city,” said Joan Gauthier, who lived at No. 24 Rathnelly, in 1970. “The lunacy is just a surface thing, the visible signs of a lively and genuine interest in urban living.”