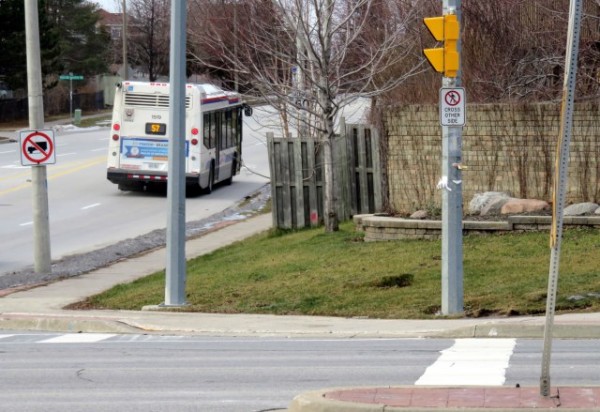 Adapted from a post in Marshall’s Musings, the author’s personal blog.

In the Greater Toronto Area, we have a fixation on building transit, especially subways, but we’re less interested in transit operations, especially local bus routes. But the majority of TTC riders take buses at least once daily, and the local bus stop is the first point of contact with the transit system for many riders. Sadly, there’s often very little thought put in to accessing local bus stops.

Needless to say, transit has a harder time in the suburbs. Suburbs are built for the car, laid out with crescents, cul-de-sacs and winding street systems meant to discourage through traffic in residential areas. Backyard fences line arterial roads, safe pedestrian crossings might be a ten or fifteen minute walk down the road. These factors, often known as the “last mile problem” can make it difficult for people living in subdivisions and near busy streets to easily access a nearby bus stop. GO Transit’s solution to the last mile problem was simple: it built giant parking lots and garages and developed a successful commuter rail system that expected its riders to park their cars at its stations.

Last year, Streetsblog USA asked its readers to vote for the sorriest bus stop in America, and some of the submissions are truly awful. But in the Greater Toronto Area, there are many examples of poorly designed or located bus stops. I’ll mention two: one in Brampton and one in Scarborough, but there are hundreds of stops in the Greater Toronto Area that could use some attention.

Intersections like the one at Steeles Avenue West and McMurchy/Malta Avenue in Brampton, which, granted isn’t as bad as the StreetsblogUSA submissions, is just one example of how not to get people out of cars and onto public transit. Some thought into placing bus stops and improving access to local transit is necessary.

I like Brampton Transit and what they’ve been doing over the last decade in my hometown. Since 2005, the suburban transit agency began to re-organize its routes into a grid system, improved schedules, and introduced new connections to Toronto and Mississauga. In September 2010, Brampton Transit introduced Züm, a network of limited-stop bus routes. My hometown’s bus system was no longer a joke.

With the introduction of Züm, and combined with other service increases, Brampton Transit ridership increased by nearly 30 percent in the last five years (2011-2015). This increase is significantly higher than the rate of Brampton’s population growth over the same time period.

In September 2015, the 511 Steeles Züm bus was extended west from Shoppers World to Lisgar GO Station in Mississauga; standard Zum shelters were installed along the corridor, including the intersection of McMurchy Avenue, Malta Avenue, and Steeles Avenue West. The existing bus stops for local bus routes were relocated to the new shelters, like the one seen below. 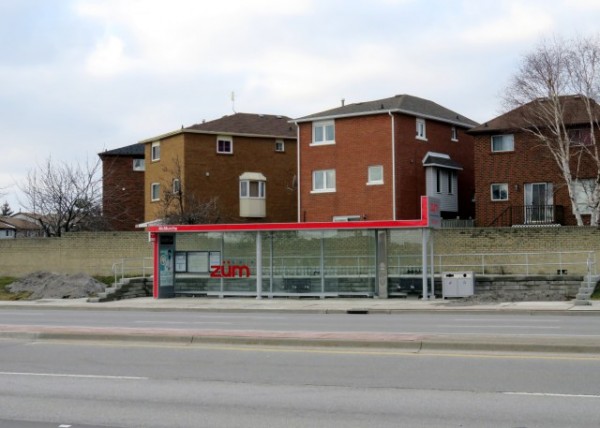 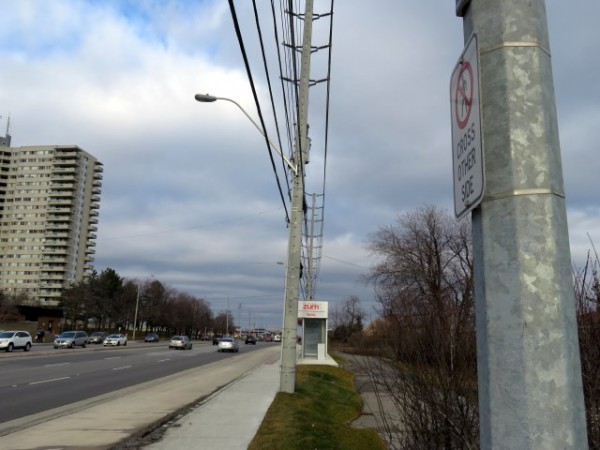 From a traffic engineering rationale, this traffic arrangement, which has existed for about a decade, makes sense. The majority of traffic is on busy, six-lane Steeles Avenue. From the north, most traffic on McMurchy Avenue turns east (left) onto Steeles, while Malta Avenue is a short stub, serving a small townhouse development on the south side of Steeles Avenue. Eventually, Malta Avenue will continue south, hooking up with another section of the same street. For now, a dormant farm field separates the two streets and awaits development.

To facilitate through traffic on Steeles, the cross streets, McMurchy and Malta, are given only green time equivalent to the minimum pedestrian crossing time. And to facilitate the left turns from McMurchy to Steeles, pedestrians are banned from crossing that side of the street. From the viewpoint of a traffic engineer, this makes sense, but it’s a mindset that ignores the needs of pedestrians and transit customers, and with the re-location of the bus stops, this has become more of a problem. This intersection is owned and maintained by the Region of Peel, not the City of Brampton, as Steeles is a regional road.

There are two options here, and at other places where people must give way to cars:

Brampton Transit has done a fine job growing its ridership over the last decade, making it a bit easier to get around Toronto’s second-largest suburb without a car. But improving pedestrian access would demonstrate that transit users are valued, even in the car-dependent suburbs. The current arrangement is unacceptable and Brampton and Peel Region should do better.

There are plenty of cases elsewhere where there are poorly-located transit stops. One example here in Toronto is the eastbound stop for the TTC’s 42A Cummer bus at McNicoll Avenue at Boxdene Avenue in north Scarborough. There’s no sidewalk on the south side of McNicoll, and Boxdene runs north. Anyone attempting to use this stop is at the mercy of traffic on this busy, four lane road.

Overall, there needs to be more thought put into locating bus stops in general and making sure they’re easily accessible.

What’s the sorriest bus stop in Toronto? Is there a particular bus stop that is particularly inaccessible or poorly designed? Let us know in the comments, and Spacing will follow up with our own poll.