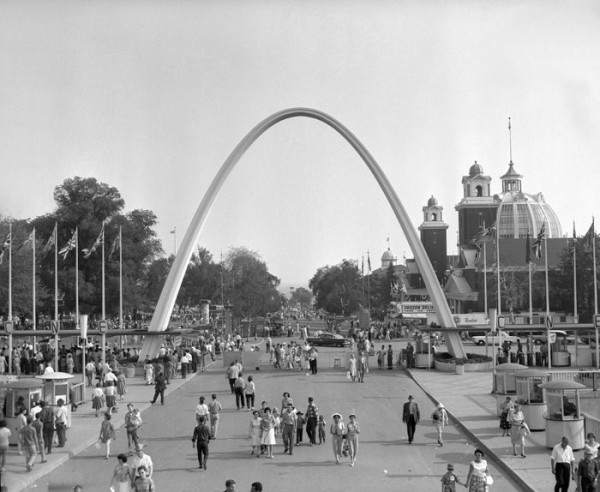 You can tell a lot about a place by how it greets its visitors.

The goofy lights at Honest Ed’s tell customers “there’s no place like this place, anyplace,” Nathan Phillips Square encourages tourists to pose for photos in front of the TORONTO sign, and the CNE Midway has the monumental Beaux-Arts Princes’ Gates.

These are all big greetings for big places.

Somewhat overlooked in terms of welcome architecture is the Dufferin Gate at the west end of Exhibition Place. The concrete parabolic arch, erected in the late 1950s, was maligned from its inception as a “loopsided hoop” and “half an egg.” 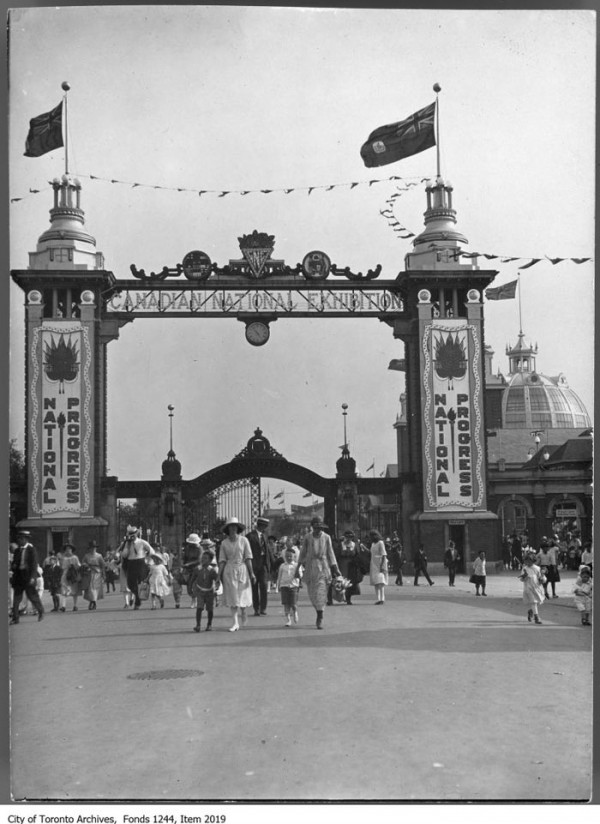 For more than 50 years, the original Dufferin Street entrance to the CNE was flanked by a festive arch designed by G. W. Gouinlock, who was also responsible for a slew of other Exhibition Place buildings, including the current home of Muzik nightclub.

Two domed brick towers completed in 1912 rose either side of the street and were connected by a pair of decorative crosspieces. A pair of wings with fancy domes hugged the grand entrance in a U-shape and contained display space for use at exhibition time.

This Dufferin Gate might have remained standing had it not been for the Gardiner Expressway. When the lakefront highway was still in the planning stages, engineering firm A. D. Margison recommended the alignment pass south of Exhibition Place on new infill land on the waterfront.

That route was rejected by the Harbour Commission and the City of Toronto, so A. D. Margison revised their plan, squeezing the highway along the north edge of Exhibition Place, parallel to the existing rail corridor.

Unfortunately, the alternative route, which was approved by the city, cut straight through the site of the Dufferin Gate and several other Exhibition Place buildings. 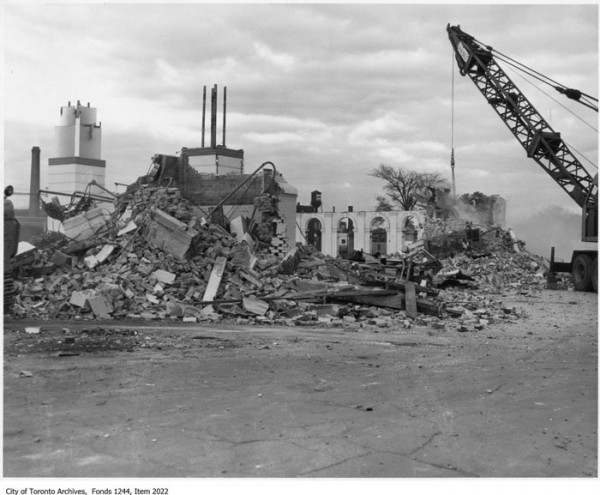 Perhaps as penance for condemning the beloved structure, A. D. Margison architect Arthur Keith—who had been chief architect of the TTC during construction of the Yonge line—was tasked with designing a fitting replacement roughly 20 feet to the south of the expressway.

The parabolic arch he pitched was roundly trashed by the city’s parks committee, which was at the time responsible for administering the CNE grounds.

“Surely there is someone in Toronto who can produce a more acceptable design than this,” snapped alderman Harold Menzies, who labelled it “makeshift” and “lopsided” in February, 1957. “It doesn’t do justice to the Metro corporation,” he said.

Alderman William Davidson said the arch “look[ed] like it was drawn after a new moon.”

Initially, the only defender of the design was alderman (and future mayor) William Dennison. “I like the plain arch,” he said. “It looks very dignified.”

Fortunately for Dennison, none of the detractors of the proposed Dufferin Gate could suggest a viable alternative, and when the design returned to the park’s committee for approval, many of its members changed their tune.

“I think it will look beautiful at night when bathed in floodlight,” said alderman May Robinson. 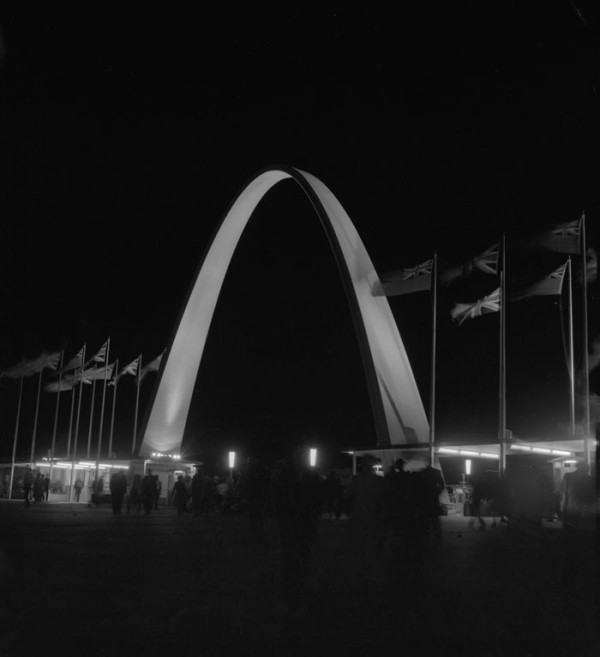 Defending his work, Arthur Keith told the park’s committee his parabolic arch had “considerable merit.” Perhaps sensing the opinion was turning agains him, Keith brought an alternative—a drawing of two 60-foot pylons that could be built on either side of Dufferin Street, a concept the committee disliked more than the arch.

The vote to approve or reject Keith’s design resulted in a 4-4 tie with neither side knowing who had won. Alderman John MacVicar successfully petitioned for a fresh vote and switched sides, resulting in a 5-3 victory in favour of the design. MacVicar said he only ever opposed the arch because he wanted more information.

Alderman Harold Menzies, the design’s most vocal critic, was absent from the crucial meeting.

The old Dufferin Gate was demolished as planned on November 6, 1958, and work began on Arthur Keith’s arch immediately. 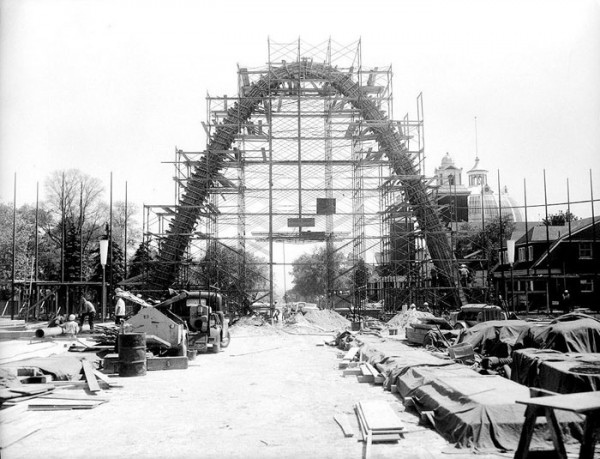 Though the structure was ultimately built from reinforced concrete, the architect suggested it could also be made out of stainless steel or aluminium. The design, he said, was inspired by similar arches constructed over the Mall outside Buckingham Palace during the coronation of Queen Elizabeth II in 1953.

Though it bears a striking resemblance to Eero Saarinen’s Gateway Arch in St. Louis, the Dufferin Gate was completed first. (Saarinen’s design, however, dates back to 1947 and it’s likely Keith would have seen some of the early mock-ups.)

The new Dufferin Gate began to take shape in the summer of 1959 and was completed later that year. The Foundation Company of Canada, the construction firm that would later build the CN Tower, erected the metal superstructure and filled the wooden concrete moulds used to create the smooth curve of the arch.

The legs were planted in welcoming new ticket booths and the whole thing painted in off-white.

The $265,000 structure was clear of scaffolding in time for the start of the CNE in August, 1959. That year’s theme was “internationalism,” and the Queen visited the grounds to take in a military review at Exhibition Stadium during her visit that year.

The new ribbon of concrete was “within sight” of her majesty, the Star reported, but she didn’t pass underneath. The motorcade entered via Dominion Street and left through the Princes’ Gate. If the Dufferin Gate caught her attention, it wasn’t mentioned. 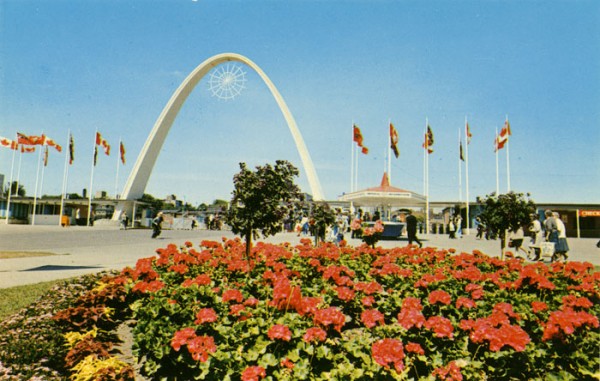 The Googie, space age entranceway has faded in importance since the 1960s. Dufferin Street still passes underneath, but the organizers of the CNE no longer use the arch as a ticket booth during the Midway.

Even into the 1970s, the Dufferin Gate was still attracting criticism from those who remembered its predecessor. Historian William Dendy, writing in his 1978 book Lost Toronto, lamented the “meagre, cheap and trite” design. This writer called it “stern” in 2012.

Whatever you think, the Dufferin Gate is really is one of the best examples of mid-century expressionism in Toronto.