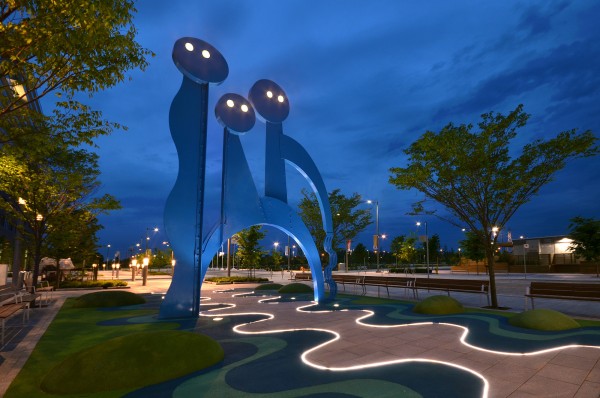 Previous articles in The Artful City series provide a thorough overview of Toronto’s approach to commissioning public art. In recent years, the proliferation of public art in the downtown core has intensified. Thanks to rapid development and city policies mandating investment in public art, the city now boasts over 500 unique pieces located in the city’s public parks, open spaces and privately-owned, but publicly accessible areas.

There is clearly a lot of public art in Toronto, and much of it is very good. The city is home to works of internationally renowned artists such as Anish Kapoor, James Turrell and Mark Di Suvero. It is questionable, however, whether the city has a coherent public art “collection”. Arguably, the very policies which have supported the rapid growth in individual public art installations, also make it difficult to take a city-wide approach to building a collection and ensuring that art works are situated in ideal locations. Toronto boasts a large number of individual works, but what does it all add up to?

More often than not, despite art being commissioned as a “community benefit”, the policies in question tie art to a specific building more than to a community. This gives the developer considerable say in the artwork selection, and the developer sees their building as being in competition with the building on the next block. They want their artwork to distinguish their building from, not work with, the building next door. Theoretically, there is always the option to channel funds off-site to a nearby public park or open space, but in practice, this option is not often encouraged by the City. This situation exists, in part, due to the lack of coherent plans that prioritize or qualify potential public art sites within city neighborhoods.

By contrast, the Waterfront Toronto Public Art Program operates on a scale and in a space that allows for a more strategic and curatorial approach.

Waterfront Toronto is funded by, and accountable to, three orders of government, but in its arm’s length role as master public developer of the city’s waterfront, the corporation is able to operate differently than the government bodies it answers to. While Waterfront Toronto adheres to the policies and rules set out by its government partners, it is also able to navigate a space of public and private partnerships that enables some ambitious moves in the realm of city building.

In many respects, the Waterfront Toronto Public Art Program is able to work outside of the limitations of the City’s typical system. Why?

The following conditions set the stage for an organizational commitment to art and culture as key elements in city building: first, scale of development – in the West Don Lands, East Bayfront, and Port Lands, Waterfront Toronto is building new communities from scratch; and second, design expectations – Waterfront Toronto seeks to work with innovative architects, designers and developers. Rigorous design expectations mean buildings need to stand out for their architecture, not rely on public art as dressing or distraction from architectural mediocrity.

Viewing public art as a vital part of a dynamic public realm, Waterfront Toronto plans for art from the earliest stages of planning a neighbourhood. This sounds obvious, but is amazing to think how much of a departure this is from usual city practice. All too often, art goes in the spot where nothing else will fit or nothing else has to happen.

By planning for art from the outset, art is not only allowed room to breathe, but it is sited with intention and with an understanding of its role and value to a place.

Waterfront Toronto works across both City public art programs outlined in previous posts with a program for public art that aims to conceptualize collections for entire neighbourhoods. The approach to planning and commissioning public art is built on two main principles: Waterfront Toronto works with private development partners to pull public art contributions out of individual development blocks and into the high profile locations that have been identified in the planning process. Also, the organization articulates a curatorial vision, nothing restrictive or prescriptive, but a loose thematic thread that will weave the neighbourhood together with works that respond in various ways to a common narrative.

Artworks are commissioned with full acknowledgement of other artworks in their vicinity; each piece is considered in relation to those other artworks and also with respect to a broader neighbourhood identity and curatorial vision. Because all of these commissions are on public sites, these pieces are handed over to the City, along with a maintenance endowment, to be cared for in perpetuity. So, unlike pieces owned by condo associations, these valuable public assets become part of a maintenance program and have the long-term advantage of an identifiable custodian, a recognizable body who is accountable and contactable if work needs to be done.

The intended result is something akin to a typical fine art collection: a connected group of works that is acquired, interpreted and maintained with clear intention and purpose and which as a whole is greater than the sum of its parts.

This summer Torontonians will be able to see the results of the first few years of work when the newest neighbourhood on the waterfront becomes accessible.

In the West Don Lands neighbourhood (a former derelict brownfield site, transformed into a thoughtfully planned, vibrant new mixed used community and last summer host to the Pan/Para Pan Am Games Athletes Village) a Public Art Strategy was approved by City Council in 2009 after extensive consultation with the community and City of Toronto. The first phase of the West Don Lands Public Art Strategy is now almost complete, and the results are compelling. Seven artworks – six new commissions and one major restoration – at strategic sites across the neighbourhood form the first chapter of a new collection. The works tell a story of human, natural and industrial history that reaches into the past and looks to the future.

Within the West Don Lands, the newly built and generously scaled Front Street promenade, serves as a case study for this approach. From early design stages, this new stretch of Front Street was envisioned to have a series of art sites. While walking along Front Street from Cherry Street to Bayview Avenue, one will encounter at each block one of the following three new works, each offering a bold and unique take on an overall vision and all visible from one to the next: 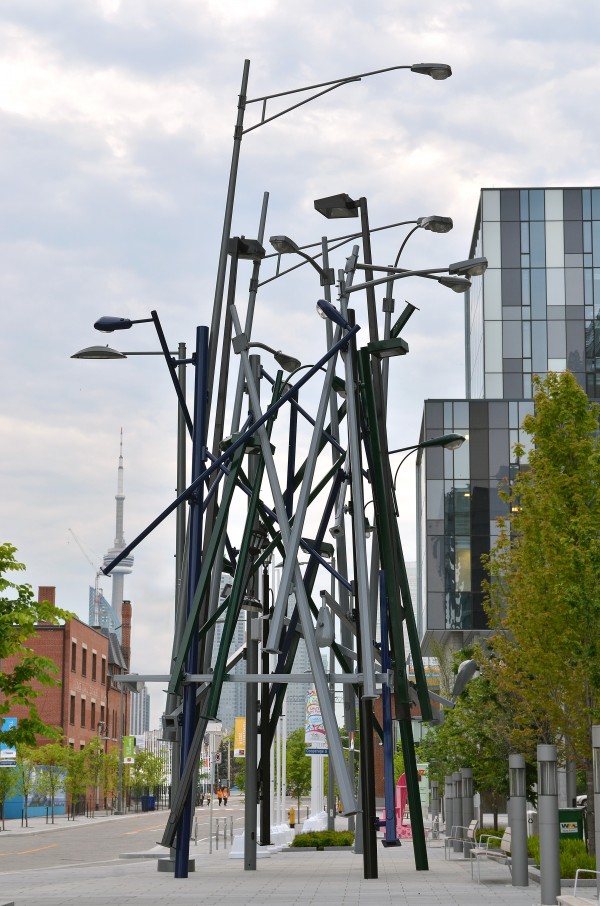 Paris-based Tadashi Kawamata’s Untitled (Toronto Lamp Posts) acts as a landmark to those coming east to the neighbourhood from downtown and, in the artist’s characteristic style, uses existing materials (lamp posts like those seen in neighbourhoods around town) to collapse history and geography with one playful gesture. 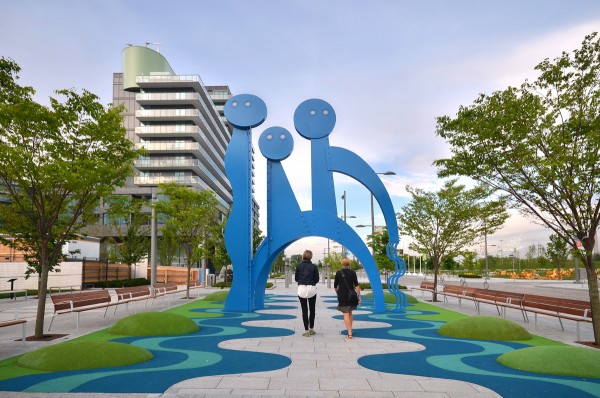 Toronto-based Jennifer Marman and Daniel Borins won the commission which sought to engage children. The Water Guardians does so both aesthetically and conceptually: with bold colours, cartoon-like forms, and bouncy variegated terrain, the piece nods to the nearby Don River and reminds us that resources such as water are not possessed but merely stewarded for future generations. 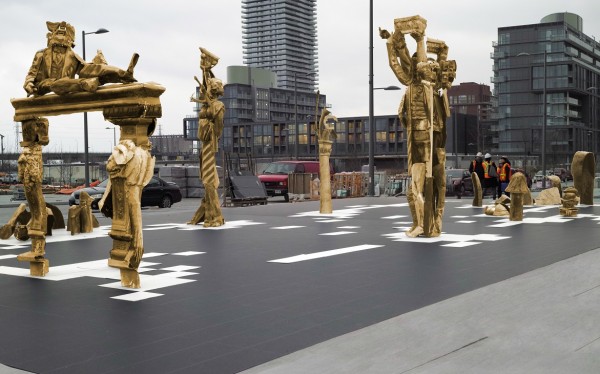 Berlin-based Hadley+Maxwell’s Garden of Future Follies, was commissioned as a legacy of the Pan Am/Parapan Games. The intention with this commission was not to commemorate the games literally but to celebrate the event as a moment in the neighbourhood’s ongoing story, as a catalyst for immense and positive change. Their concept extends their gallery practice and, working with existing historical monuments and architecture throughout the City, creates a new series of monumental characters for the future.

To read more about the specific pieces commissioned to date within this strategy, please go to the virtual tour on Waterfront Toronto’s blog.

The successful implementation of these and other pieces in the West Don Lands provided the final incentive needed for the City to officially endorse Waterfront Toronto’s to other major move in Toronto’s public art landscape: in December 2015, City Council approved the East Bayfront Public Art Master Plan. This document builds upon the precedent set in the West Don Lands and applies it to another area of development, where typically the public art would all be commissioned block by block through the City’s standard Percent for Public Art program. The East Bayfront Public Art Master Plan sets out a vision for public art in the neighbourhood beside the lake (bordered by Jarvis Street to the west, Parliament Street to the East, Lake Shore Boulevard to the north, and Lake Ontario to the south) that once again pools percent for art development contributions into meaningful, high-profile sites, with a view to forming a public art collection that will define the neighbourhood.

The document sees art employed as a magnet: a magnet that fuses the identity of the Lake to the identity of the neighbourhood, one that stitches the neighbourhood together and adheres the neighouboorhood to the city. Water is the thematic thread that can be variously interpreted within a program that calls for three types of commission: Thresholds, Connections and Destination.

Thresholds will be major commissions at the railway underpasses at Jarvis, Sherbourne and Parliament. These are immersive artworks that will offer a glimpse of what lies south of this barrier, and compel movement towards the lake.

Connections will be commissions sited mid-block both north and south of Queens Quay. The pieces will engage visitors, but their focus is primarily with the community members that will soon reside in this area, providing moments of reflection and contemplation.

And the Destination piece is the one we envision will draw people down to the waterfront; the one people will take pictures of, bring their out of town guests to see and really take time to think about. This is a major commission that will engage both literally and conceptually with the hard edge boundary that is our shoreline in downtown Toronto. Something that invites Torontonians and our guests to think about, or experience, this hard edge differently.

That, after all is the role of art in the city.  A place has no meaning without human experience and art in public is the most human element of city building. It is the opportunity to tell a story, maybe even a joke, ask a question, put forth another possibility and provoke discussion. It is the opportunity for busy urban dwellers to take a pause, however brief, from the demands of daily life and think about something bigger, something that connects people to each other and to a place.

With the first few years of the Waterfront Toronto public art program behind us, we are able to point to some achievements that we hope will ignite change in Toronto’s public art landscape and our expectations for art in public.

Rebecca Carbin holds a Masters in Contemporary Curating from Goldsmith’s College, UK. She has worked with Artangel, Public Art Development Trust, and Saatchi Gallery. As Public Art Officer at City of Toronto, Rebecca opened up opportunities to artists working in different media and at different stages in their careers. Rebecca is Public Art Program Manager for Waterfront Toronto and is also Founder of I Heart Your Work Art Futures.