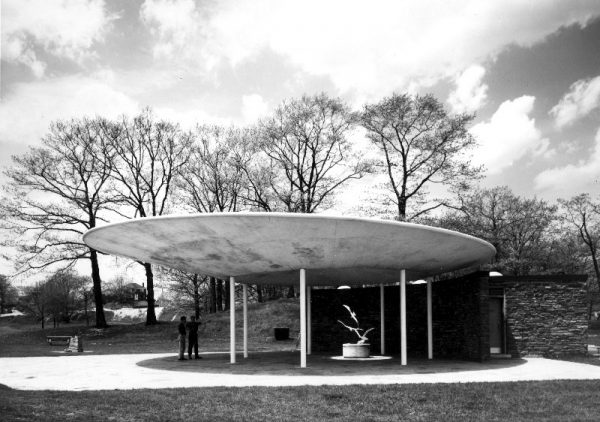 It’s hard not to love the Park Pavilion.

Designed in 1958 by British-born architect Alan Crossley and consulting engineer Laurence Cazaly, the space age washroom and shelter in South Humber Park is a wonderful example of the exuberant architecture created across North America during the 1950s and 60s. Think the Space Needle and the Theme Building in Los Angeles on a smaller scale.

Though Crossley and Cazaly were only designing a rest stop, their blueprints elevated a simple structure to something truly exceptional and joyful.

Unfortunately, time hasn’t been kind to the Park Pavilion: The washrooms are now permanently locked and covered in graffiti, the flagstone floor was ripped up ripped up years ago, and a lack of proper care has resulted in the whole thing looking like it might collapse under its own weight.

To make matters worse, the pavilion is currently the subject of a well-meaning but architecturally insensitive renovation proposal. Under plans currently funded by the City of Toronto, the washrooms will be demolished, textured paving added to the area under the concrete canopy, and the support poles clad in stone.

According to local city councillor Justin Di Ciano writing in his July constituency newsletter, the washrooms have “attracted illicit deals and behaviour as well as graffiti and unfortunately they have not been utilised as intended.”

Following a public outcry, which saw the pavilion added to the Architectural Conservancy of Ontario’s list of “at risk” buildings and circulation of a successful petition, the city agreed to put its plans on hold pending a review of the file by Heritage Preservation Services, the folks with the power to protect historic buildings.

That Crossley and Cazaly’s pavilion was almost unceremoniously altered is a testament to how little Toronto thinks about its youngest historical buildings—especially ones from the post-war modernist period.

With that thought in mind, here’s the backstory on the Park Pavilion. 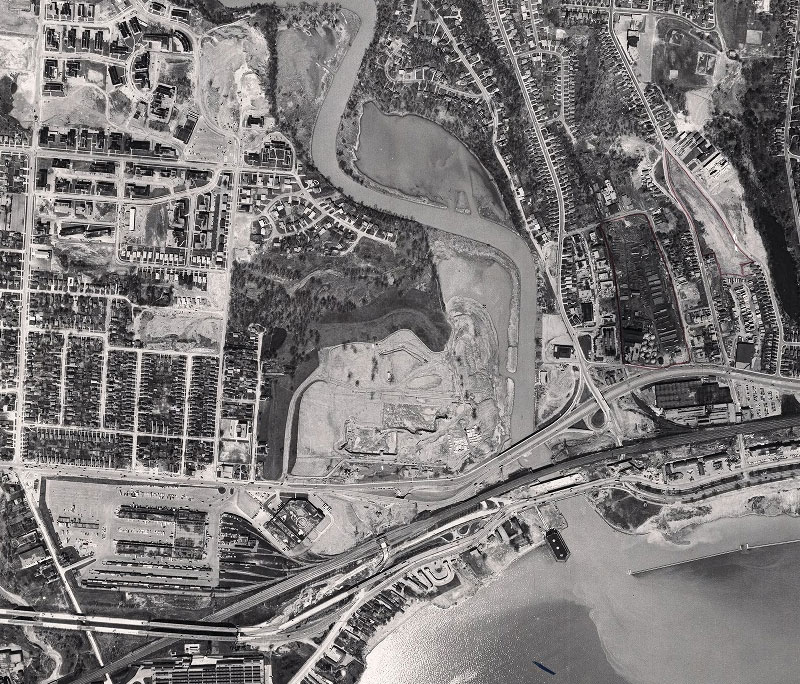 The land that is now the South Humber Park was acquired by Metropolitan Toronto in 1957, three years after the devastating Hurricane Hazel. The storm’s thumping rains and high winds caused widespread disaster across Southern Ontario. Previously quiet creeks and rivers roared to life, washing out roads and bridges.

On the Humber, Raymore Drive near Lawrence Avenue and Weston Road was almost entirely swept away. 30 of the 81 deaths attributed to the storm occurred there when houses were torn from their foundations by fast-flowing water.

The fallout post-Hazel included the founding of the Toronto and Region Conservation Authority through a merger of several smaller conservation authorities. New legislation allowed groups like the TRCA to acquire vulnerable or potentially dangerous land for protection, including parts of the Don and Humber rivers.

Before it was acquired by the conservation authority, the land on the west bank of the Humber River near the lake shore was part of the Humber Valley Golf Course. In 1957, the area was partially cleared to allow construction of the Humber Sewage Treatment Plant. The remaining land, much of it still landscaped, was repurposed as public parkland and fitted with paved walking trails, benches, and picnic tables in 1958.

Two months later, in July, 1958, Crossley presented his work to the approval of the parks committee.

“The design of the building, while unique, is extremely functional and all details of design have been carefully calculated to render a facility which provides all services for which it was planned, at a low maintenance cost and with little if any opportunity for vandalism,” recorded the minutes of the meeting. 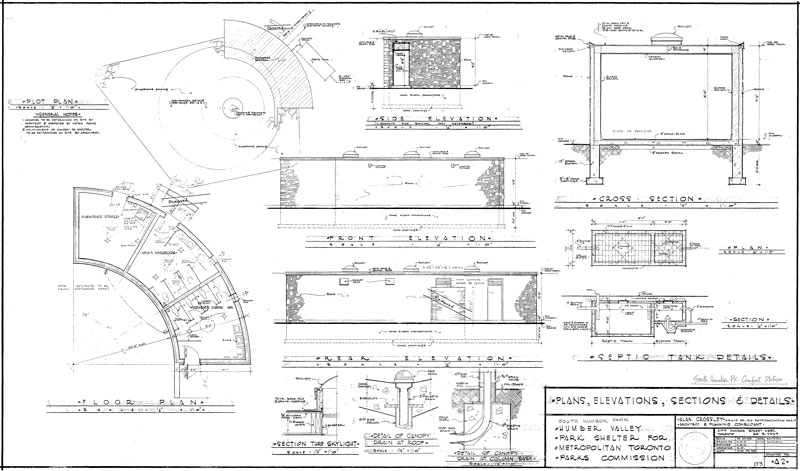 In addition to Crossley’s plans for the washroom, the blueprints included work by precast concrete pioneer, Laurence Cazaly. It’s not clear if Crossley, the official lead architect, designed the distinctive spaceship shelter and consulted Cazaly on how to execute it, but Cazaly’s initials appear on the box indicating the designer of the roof.

The first round of tenders for construction of the shelter and washroom were opened in January, 1959, but Parks and Crossley agreed all three, including the lowest of $35,198 submitted by the Carr Construction Company, were too expensive. The tender was reissued and the second round of bids opened in March, 1959.

The lowest estimate for the building of the washroom was this time filed by Connolly Construction Limited, but Parks was concerned the company lacked the experience to tackle the complex roof structure. The tender of the second lowest bidder, Young & Apperley Ltd., which priced the work at $33,428, was therefore the one accepted.

Etobicoke Hydro laid down the necessary electrical cabling in July, 1959 and construction on the shelter began around the same time. The simple structure consisted of a men’s and a women’s washroom and a janitorial storage area, but the star of the show was of course the reinforce concrete canopy with its central oculus.

Midday and afternoon sunlight that shone through the circular opening was focused into a beam of light that illuminated an sculpture of birds in flight. The remainder of the concrete roof, which was supported by seven poles, provided important shelter and shade for park goers. 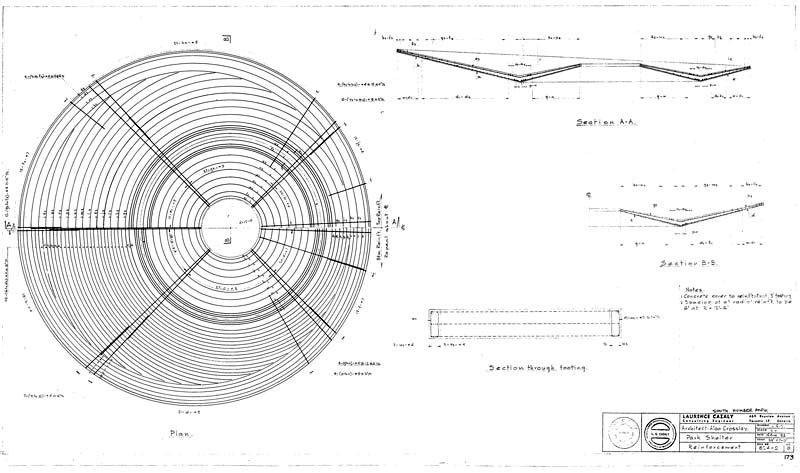 The blueprints of the shelter roof are signed by precast concrete pioneer Laurence Cazaly. Image: Toronto Parks, Forestry and Recreation.

Before designing the spacey Etobicoke washroom, Crossley worked in the architectural department at the Canada Mortgage and Housing Corporation, a Crown corporation of the Canadian government that provided affordable housing in the post-war years.

It was Crossley’s job to prepare blueprints for the CMHC catalogue, which provided a selection of prepared house designs to home builders across the country. Crossley left CMHC in 1957 to establish his own practice in Toronto at 4199 Dundas Street West near the Humber River.

Around the same time as he was designing the Park Pavilion, Crossley designed a house for a former colleague in the Rothwell Heights neighbourhood in Ottawa. He also built a home for himself out of an old barn in Erindale that was threatened with expropriation by construction of the University of Toronto’s Mississauga campus in 1965.

In the late 1950s, Laurence Cazaly was an expert in precast concrete forms with a particular interest in bridges. He built a concrete bridge at the Royal Canadian Yacht Club on the Toronto Island that was for a time the longest prestressed concrete span in Canada. Cazaly also consulted on the 1960s redesign of University Avenue as well as the concrete forms use in New City Hall.

In 1968, he was appointed to a three-man design team with Raymond Moriyama to prepare the plan for the new Metro Zoo. “Cazaly is a brainy, creative guy who just loves a footbridge, say, if it poses an engineering problem,” said Brad Johnson, a consulting engineer and one of the leaders of the zoo project.

Cazaly was also the consulting structural engineer on Winnipeg apartment building 811 Grosvenor Avenue in 1960. The 8-storey structure won the Centennial Award for Residential Design from the Canadian Housing Design Council was the tallest precast concrete building in the country when it was finished. 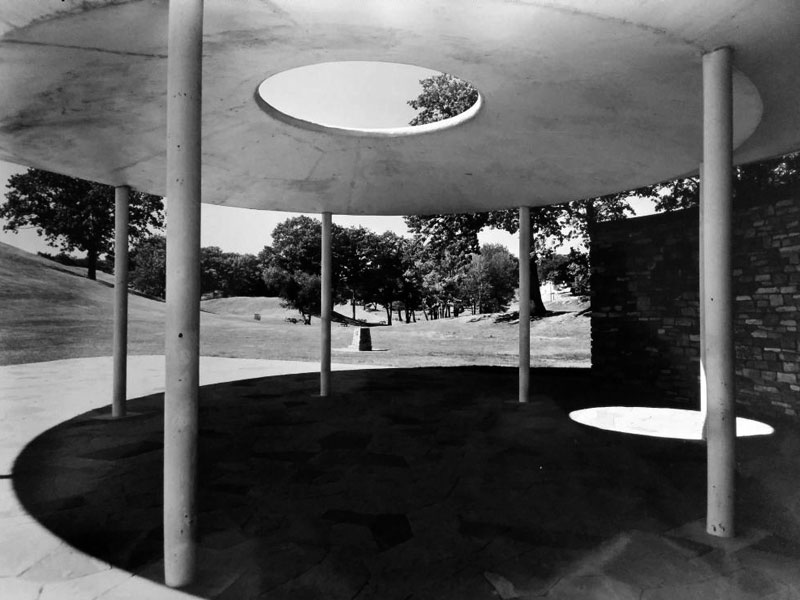 The inside of the park pavilion in the late 1960s. Its not clear when or why the bird sculpture was removed. Image: City of Toronto Archives, Fonds 220, File 35, File 76.

Initially derided as “makeshift” and “lopsided” by the same Parks committee that lauded Crossley and Cazaly’s work, the parabolic arch designed by architect Arthur Keith was nevertheless approved in 1958. “I think it will look beautiful at night when bathed in floodlight,” said alderman May Robinson.

Perhaps the South Humber Park pavilion needs illuminating, too. Soft white lights set in the ground to highlight a rejuvenated, graffiti-free spaceship roof. The flagstone floor should return and the washrooms fixed up for the users of the Humber trail.

After all, this is a building that epitomizes the optimism of Toronto’s post-war years. When the city is looking at ways to transform its ageing inner suburbs, doesn’t it make sense to protect the things that made those places great in the first place?