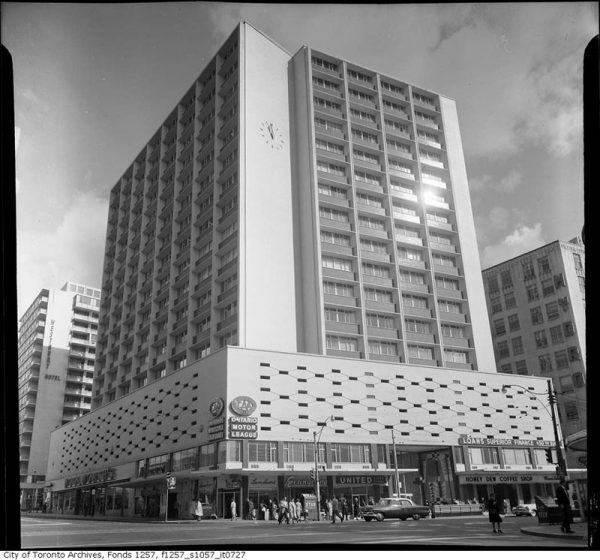 What do you picture when you read the words “heritage building.”? It probably isn’t the Carlton Tower at Yonge and Carlton streets.

The 18-storey office building was completed in 1958 in a Modern style typical of Toronto’s post-war boom era. It predates TD Centre, Toronto City Hall, and is an early example of the tower-on-a-podium style used practically everywhere in Toronto today.

This week, its owner submitted plans to demolish the building for a pair of 72-storey condominium towers. The Carlton Tower, which is currently home to a Shoppers Drug Mart and Bulk Barn, is part of the planned Historic Yonge Street Heritage Conservation District, but it is deemed “non-contributing,” which means it lacks legal protection from demolition.

The Carlton Tower, like many Modern Toronto buildings, is in late-middle age, when indifference and neglect are at peak levels. Every architectural style goes through this period before enough people become willing to love and defend it.

Old City Hall was the subject of at least two demolition proposals in the 1960s and 70s, when it was roughly the same as the Carlton Tower. During planning of New City Hall, the venerable old municipal building was derided as being “fortress-like” and unworthy of protection by the Globe and Mail.

Many of Toronto’s great post-war buildings have met the wrecker in the last few years. The Inn on the Park, the “Half- Round” at Riverdale Hospital, the Don Mills Curling Rink, and the Bata Shoe Headquarters, just to name a few, were all cut down before reaching a vintage suitable for a concerted public outcry.

The proposal to demolish the Carlton Tower is in the early stages, but if no-one speaks up, it will also be knocked down before it can be cherished. 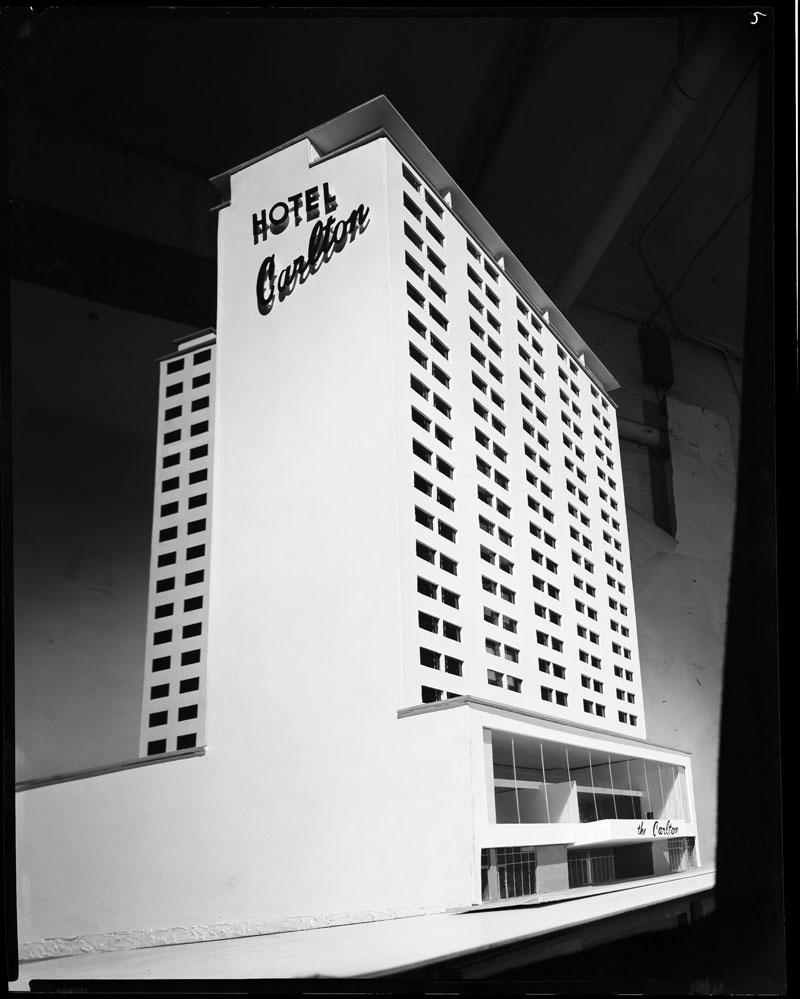 The proposed Hotel Carlton that would have been built beside Maple Leaf Gardens. The developer, Atlantic, went into receivership before work could begin. Image: University of Calgary, Panda Associates fonds, 73A/80.8.

Carlton Tower was a collaboration between two architects: Edward I. Richmond and Alan R. Moody. It was originally supposed to be one of a pair of buildings on the north side of Carlton Street, east of Yonge Street.

A 21-storey hotel, the Hotel Carlton, was planned by the same developers for the lot beside Maple Leaf Gardens, which is now home to a Holiday Inn.

A group of New Yorkers that included real estate executive Morton S. Wolf, the operator of Ritz Towers and Delmonico’s Building, agreed to lease and run the finished building for 25 years from Toronto-based Atlantic Development and Investment Corp. Ltd.

Had it been built, the $10 million hotel would have opened in late 1957 or early 1958 with 493 soundproof rooms. A “vice-regal” suite, eight luxury penthouse rooms, dining space for 400, two cocktail lounges, and a 1,000-person ballroom were also included in the blueprints by Edward I. Richmond and New York architectural firm Kahn and Jacobs.

Kahn and Jacobs has previously worked with Ludwig Mies van der Rohe and Philip Johnson on the Seagram Building in Manhattan, and Ely Jacques Kahn, a named partner in the firm, provided important inspiration for author Ayn Rand while she was working on her novel, The Fountainhead. Rand was an unpaid typist in Kahn’s office while she worked on the novel.

Falling demand for hotel rooms in downtown Toronto forced Atlantic Development to temporarily ice the Hotel Carlton project in favour of an 18-storey office building on a site to the west, at the northeast corner of Yonge and Carlton streets. 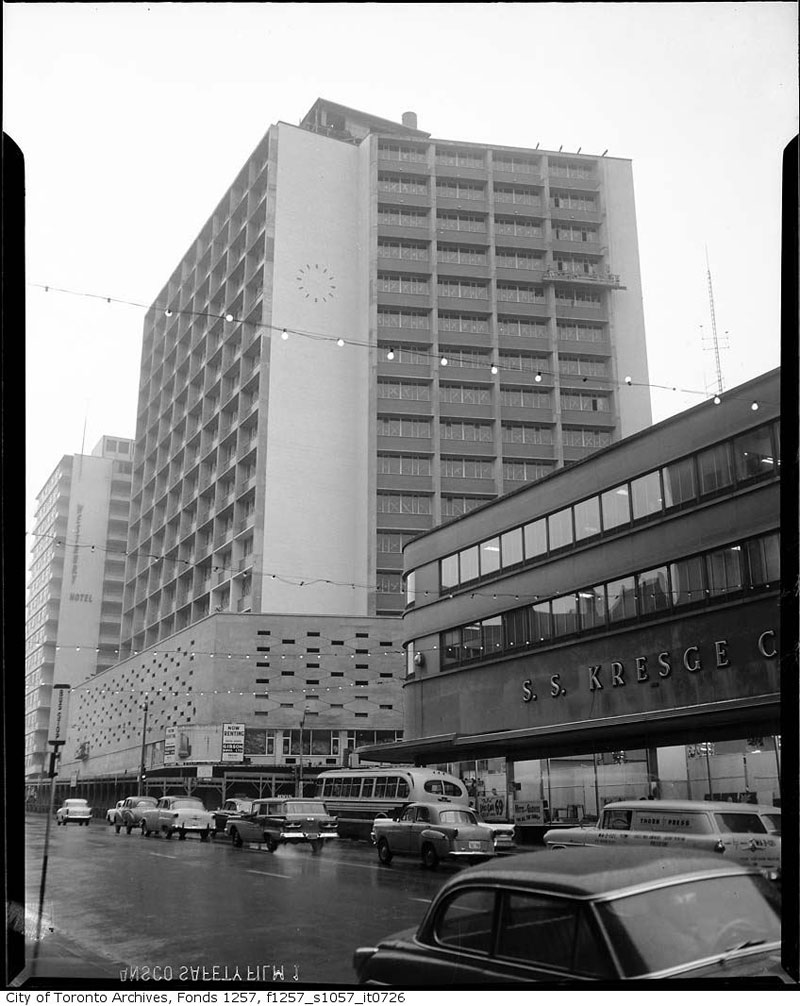 The Carlton Tower under construction in 1958. The Westbury Hotel, which features several similar design elements, is visible in the background. Image: City of Toronto Archives, Fonds 1257, Series 1058, Item 726.

Construction started in late 1957 and was almost completed about a year later. The architects drew heavily on the work of Peter Dickinson, who designed the adjacent Westbury Hotel, and the headquarters of the Salvation Army by John C. Parkin.

The podium level of the building above the stores was a multi-storey parking garage wrapped in a concrete wall decorated with a diamond pattern. Due to the proximity of the Yonge subway line, the architects decided to cut costs by building the 250-space lot above ground.

Building code ventilation requirements necessitated the rectangular openings in the concrete. Some were located at exhaust pipe level with the others at eye and ceiling of each parking floor level.

The large vertical wall on the south side of the Carlton Tower was enlivened by a large illuminated clock and the main entrance off Carlton Street had a large public artwork on the outside of its glass doors.

Up above, the Carlton Tower didn’t look much like an office building. The windows were sectioned off, making the whole thing appear to be comprised of small units; hotel rooms or apartments, perhaps. Glazed black brick spandrels—the walls below the windows—helped break up the visual monotony, and recessed windows provided important shade.

Woolworth’s leased the largest retail space in the Carlton Tower, on the west side of the building where the Shoppers Drug Mart is now. The corner store at Yonge and College streets was occupied by Laura Secord chocolates, and there was a branch of the clothing store Evangeline and a Honey Dew Coffee Shop. 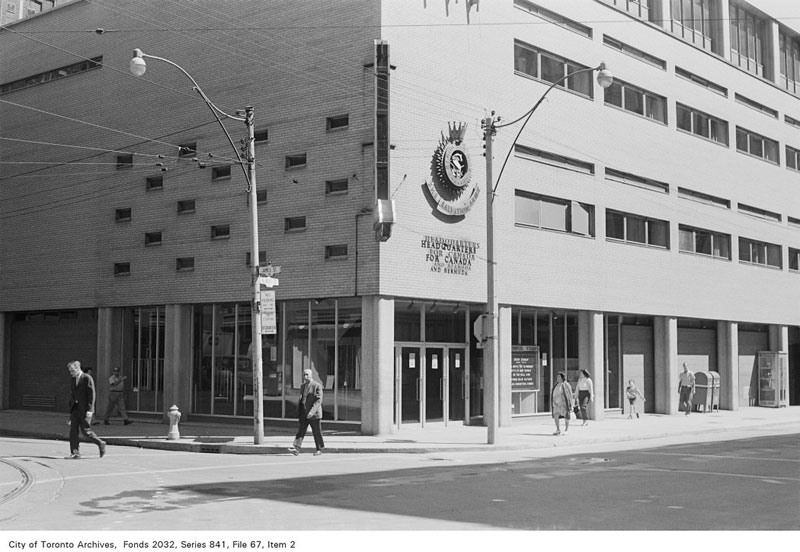 Unfortunately, the owners weren’t kind to their crisp Modern tower.

The clock on the outside of the building was taken down in the 1970s (look closely at the image below and you can see where it used to be,) and in the early 1980s the parking garage was painted teal. Advertising billboards were allowed to spread unchecked over the exterior, especially at the corner of Yonge and Carlton streets.

It also appears that the artwork at the main entrance to the office floors on Carlton Street vanished around this time.

A recent renovation restored the Carlton Tower to its original white, but failed to bring back the clock or the artwork. 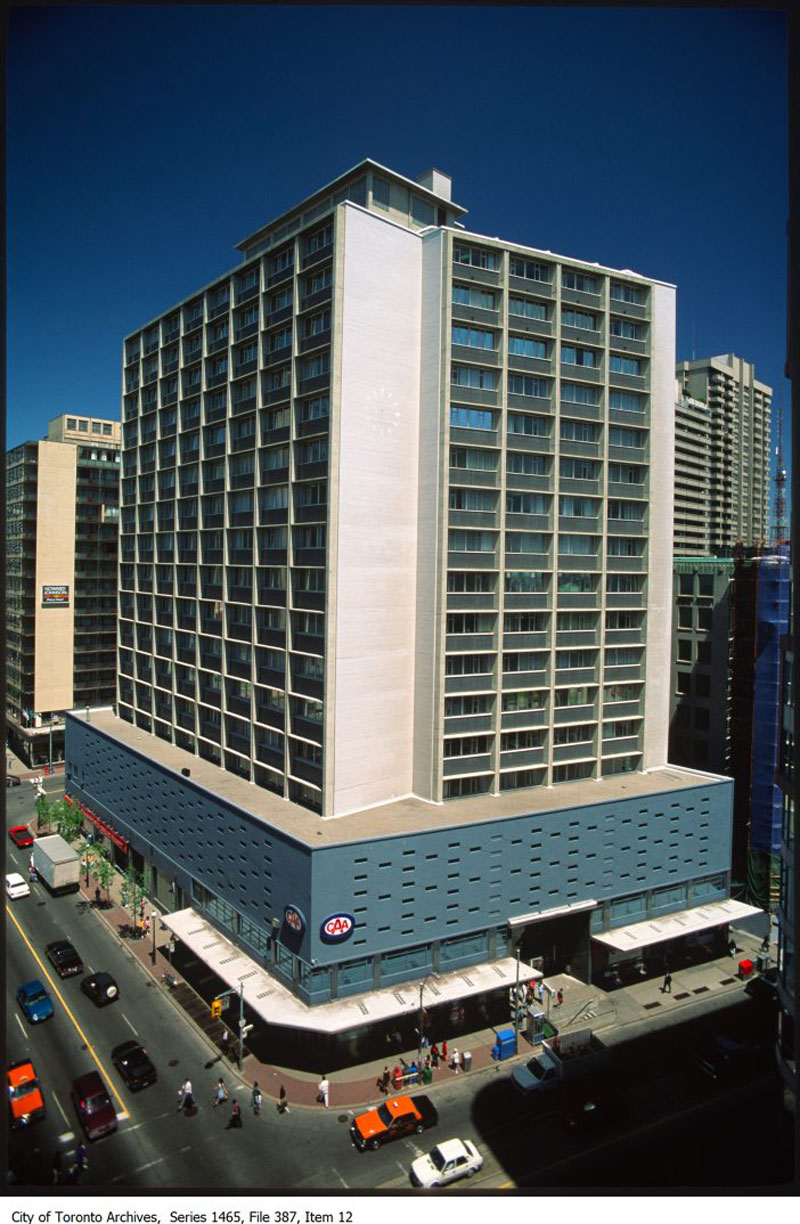 The Carlton Tower with its parking garage painted blue in the late 1980s or early 1990s. The faint outline of the clock’s hour markings are visible on the exterior. Image: City of Toronto Archives, Series 1465, File 387, Item 12.

Over the years, the offices have hosted the Ontario Motor League chapter of the Canadian Automobile Association, Ontario Press Council, Superior Finance, and Toronto International Film Festival Group before it moved to the TIFF Bell Lightbox.

In the world of media, 2 Carlton Street has hosted the offices of the Ontario Press Council, the Film Reference Library, and currently Pink Triangle Press, the publisher of Daily Xtra.

Among the documents owners of the building submitted as part of their plan to demolish 2 Carlton Street is a Heritage Impact Statement by GBCA Architects. This paperwork articulates the historical value of the current building.

It claims “no event, belief, person, activity, organization or institution, to the best of our knowledge, is connected with the building” and that, when viewed in context with its surroundings, it is nothing more than “a backdrop to the more important adjacent sites.”

Overall, GBCA believes Carlton Tower is of no real heritage value, which is a shame because the office tower represents an important phase in Toronto’s history.

Carlton Tower was built during when this city truly came of age. Unlike New York and Chicago, Toronto had its boom period after the Second World War. The Carlton Tower and buildings like it went up when Toronto was young and optimistic.

So many of that era’s architectural wonders have been carelessly demolished or left to crumble without protest.

If we lose the Carlton Tower and its contemporaries now, we will never get them back.

Every building tells part of the Toronto story. We just need to decide which chapters we would like to remember.