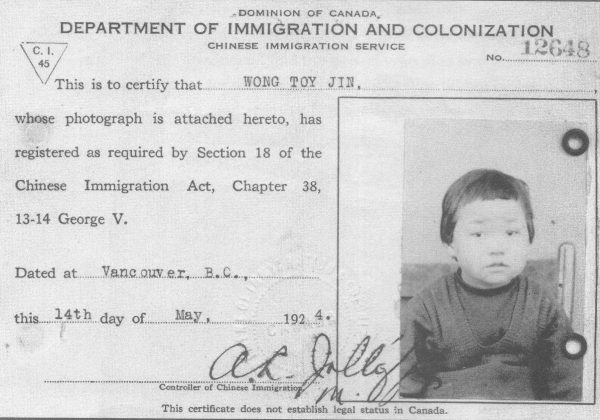 On Dominion Day, 1923, Canadians were in a celebratory mood. But those good feelings didn’t extend into any Chinatown. July 1 came to be regarded by the Chinese in Canada as “humiliation day.” The Chinese Immigration Act, known commonly as the Chinese Exclusion Act, banned virtually all Chinese immigration for the next 24 years. It stood as the most severe legislation of the more than a hundred anti-Chinese policies of the day. The successively increased head tax of $50 (1885), $100 (1900), and $500 (1903) failed to deter immigration, as intended, at a time when the vision for the country was a ‘white Canada.’

My mother, Jean Lumb, nee Toy Jin Wong, was three years old on that infamous day, but almost a year would elapse before a government bureaucrat photographed her for this official document. After all, the Chinese Exclusion Act not only halted immigration; it also required that all Chinese, whether born in Canada (as my mother was) or abroad, to register for an identification card within one year of the passage of the new law.

The card looks uninteresting in itself – a document that lived for decades in a shoebox. But in a recent interview for Ming Pao Daily News, a former employee of the now defunct Shing Wah Daily News, once the largest Chinese newspaper in North America, commented that the need to pass on and preserve this history to future generations is more urgent than ever. The connections to our past are fast fading with the loss of our elders.

Such documents will now be shared, thanks to a new initiative of the Toronto Public Library. The mandate of the Chinese Canadian Archive — which will be launched officially at a reception this evening (Tuesday) at the Toronto Reference Library – is to collect, preserve, store, and provide access for researchers and the general public.

“This archival program is a great opportunity to properly accommodate our family’s precious historic material that our children will not want to keep,” says Nelson Wong, whose father, W.C. Wong, was a prominent leader in Chinatown.

Mavis Chu Lew Garland, who grew up in Chinatown, wants others to know that her “half-Chinese family also existed in Toronto.” Garland’s sizeable donation of documents and photos reveals the extent to which her family honoured its Chinese heritage. “The items will now be available to be shared with whoever is interested in the Chinese culture, and in the people who valued them.”

Indeed, treasures like these, or my mother’s certificate, head tax certificates, naturalization papers, receipts, photos, diaries, letters, and other memorabilia, tell the stories of not only the Chinese Canadian community, but also of our great city.

Here’s a preview of some of the documents that will be included in this collection: 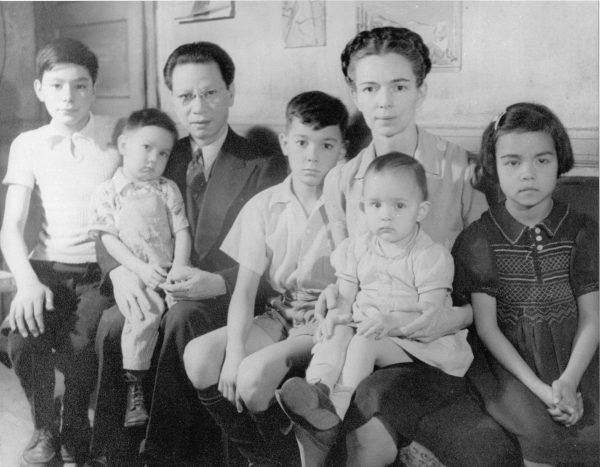 Mavis Chu Lew Garland, far right, from an interracial marriage at a time when there was a significant gender imbalance due to the Chinese Exclusion Act. The Chinese community was characterized as being a bachelor society. Although most Chinese men married, their wives and children remained in China. 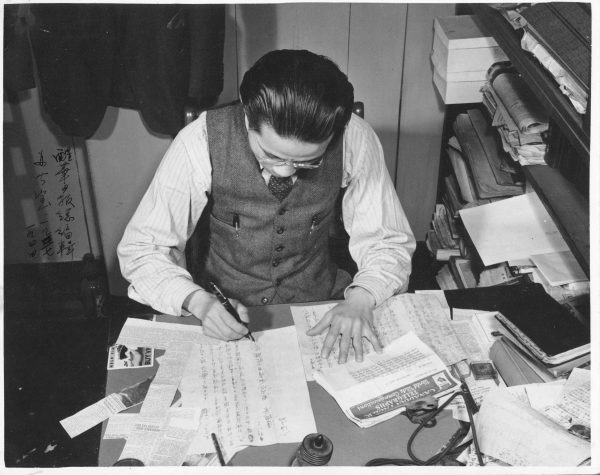 W.C. Wong served as chief editor of the Shing Wah Daily News, president of the Chinese Community Centre of Ontario, and president of the Guomindang in Toronto. He travelled regularly to Ottawa after World War Two as a member of a delegation whose members sought changes to the immigration laws that prevented family reunification. 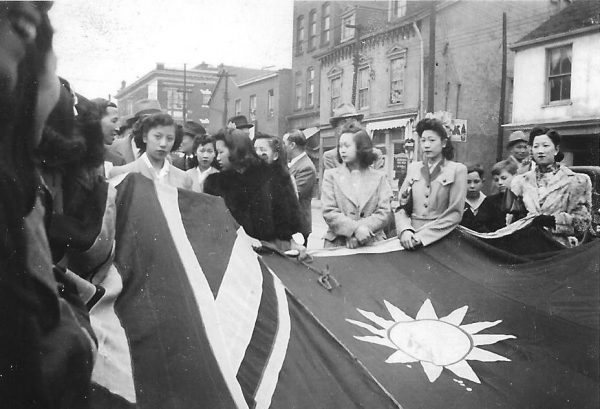 Young women in Chinatown are collecting donations tossed into the flags of Canada and the Republic of China for the war relief effort The Wineberg Apartment, built in 1907, stands in the distant background on the northeast corner of Dundas and Elizabeth streets. All the other buildings have since been redeveloped as high-rises. This photo is also significant because it attests to the erasure of The Ward and Toronto’s first Chinatown. 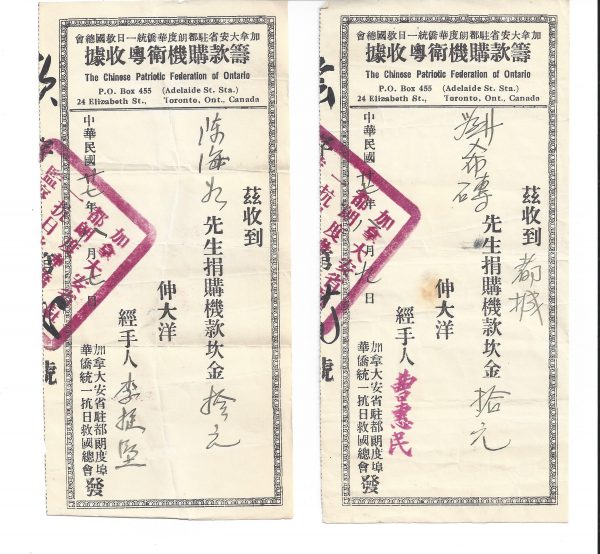 A receipt from the Chinese Patriotic Federation was issued for a ten-dollar donation in 1938 to aid China’s war against Japan. An appreciation of our city’s rich history cannot be acquired merely by dates and numbers, like the ones on this document: these don’t tell the whole story. But when seen alongside the image above of the flag-carrying women, the two documents illustrate the extent of the Chinese community’s political engagement and substantive financial aid during the Sino-Japanese War and World War Two. Such commitments were a contributing factor in the post-war repeal of the Chinese Exclusion Act and the restoration of the right to vote.

Toronto is putting a face on its history. The Toronto Ward Museum and Myseum of Toronto are new initiatives that are connecting first-hand accounts about the past to the present day. Shared experiences show commonalities that cross all groups, whether they are the third and fourth generations or newly-arrived immigrants. These projects are welcome additions to the rich resource of oral histories and archival photos at the Multicultural History Society of Ontario.

The Chinese Canadian Archive is another project that will help us cultivate, for generations to come, a deeper knowledge and appreciation of what makes Toronto great.

Arlene Chan is a librarian and author of numerous non-fiction and children’s books, including The Chinese in Toronto from 1878: From Outside to Inside the Circle. Follow her on Twitter @arlenechan1