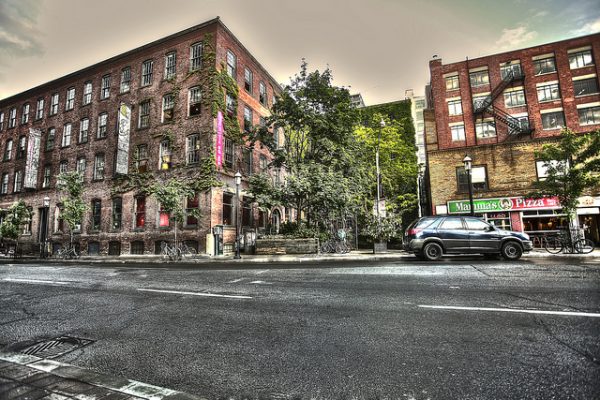 I loved 401 Richmond before I even knew what it was.

It was 9 years ago and I was in Toronto, visiting from Vancouver. My friend Lauren, a curatorial student, took me out to a party. We pulled up to a large warehouse building with warm, glowing windows in the night. Inside was a packed gallery. We grabbed drinks and wound our way through people, books, and art. It felt like magic. Where am I, I thought, dazed.

Turns out I was in a building that would become, when I moved to Toronto in 2010, one of the centres of gravity around which my life in Toronto revolved.

But 401 Richmond, managed by Urbanspace as a downtown haven for culture, arts, environmental, and city building non-profits, is under threat because of a tax assessment system that essentially says it should be a condo—not a building filled with hundreds of creative jobs—and taxed as such. Its property taxes are set to nearly triple by 2020.

My second introduction to 401 Richmond was when I moved to Toronto. Looking for jobs, and armed with previous bookstore experience, I applied to all the bookstores I could find. Swipe, a bookstore of design and architecture, was the one that called back. It was located, as it still is today, inside 401 Richmond. I worked in that store—at the time a glass box nestled within the core of the building— for a year while I went to the University of Toronto for my masters degree.

I got an internship at Spacing Magazine, the urbanism magazine that at the time ran its shop out of a space on Spadina. That internship, nearly seven years ago now, was an important introduction to Toronto’s flourishing city nerds scene. I still write for the magazine today, but now Spacing, and the retail store of cool Toronto merch it birthed is housed–you guessed it–in 401 Richmond.

And for the last three years, I’ve walked through the doors of 401 Richmond every weekday for my current job at the charity Park People. We are located in the shared office called the City Builders Lab, which also houses groups like the Ryerson City Building Institute and Diasporic Genius, a non-profit that uses music and storytelling in place-making.

Working here, in a building that has such a concentration of amazing organizations, is not only an inspiring dream, but a practical help. Other organizations we’ve worked with, like Myseum, are just a few flights of stairs away. When we printed out vinyl and poster boards for an exhibit, we walked upstairs to the printing house in the building. When I feel stressed, I visit the rooftop garden or walk around the maze of hallways sometimes encountering a train of small children being led by a worker in the building’s daycare.

401 Richmond is like a drop of water that, when you look closely, contains a million worlds. 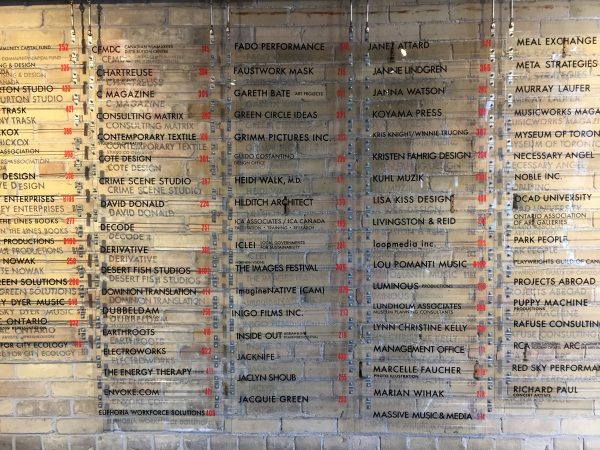 The thought of losing the building or of organizations being pushed out because of a tax system that operates on a cruel, cold mechanism privileging blind market-drive growth doesn’t just make me profoundly sad, it makes me super pissed.

Do we want to build a city, with all the complications, messiness, and diversity that word contains, or do we want to build a collection of clean, smooth condos? Do we want to keep space for creative industries, non-profit start-ups, indie art galleries, and environmental groups? Our municipal policies may say yes, but the economic priority in our tax system—rules which are set by the Province—says nope.

That’s because properties are assessed under something called “highest and best use,” which takes a look at the building, what’s around it, and assesses its value on what it could become (a condo) not what it is currently. Highest and best use is one of those fun capitalist words that shrouds itself in a benign objectivity, but really is making a value judgement, nudging our city towards a certain outcome: sameness.

As Edward Keenan pointed out in the Toronto Star, sometimes this could be good—encouraging owners who are holding onto parking lots and under-used buildings to develop them into something more beneficial to the neighbourhood. But its twisted side effect is that by painting everything with the same, broad brush, we wipe out the particularities and difference that can make a neighbourhood great in the first place. Turns out highest and best use can actually be a race to the bottom disguised as a rush to the top.

401 Richmond is not just a building. It’s a hub of community, a place that gives young people their first start, that provides a foothold for fledgling non-profits and arts organizations that do amazing, life-changing work. Without 401 Richmond, my trajectory in Toronto would look vastly different and I’m grateful to Margie and all the Urbanspace staff who make this place work year after year. I hope that it goes on to live a long life, offering the same inspiration, support, and community for many more young people.

If that’s not a highest and best use, then I don’t know what is.