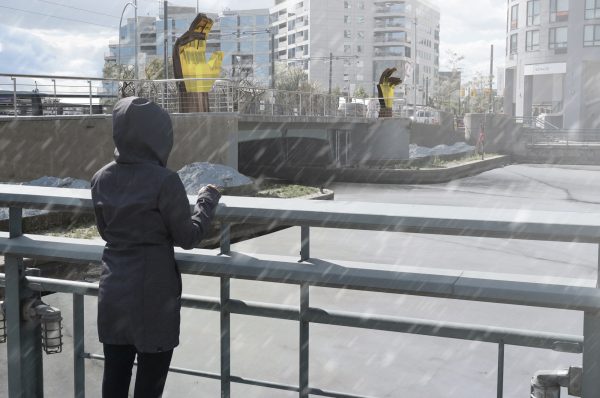 Toronto is a city of both climatic and cultural extremes. Hot long summer days are populated by more festivals than one can count; from outdoor art and music events to public film screenings and photography exhibits, the city is teeming with creative energy and Torontonians take full advantage knowing well that winter is fast approaching. By contrast the cold dark winter months drive everyone indoors and underground. The city’s vibrant public spaces lay dormant waiting for spring to bring them back to life.

However, one group of designers and public art consultants are trying to change these annual patterns by reclaiming the most seasonal of Toronto landscapes during the city’s coldest months. Winter Stations, the collaboration between RAW Design, Ferris + Associates and Curio, is an annual international competition that calls for temporary installations along Kew, Scarborough and Balmy Beaches. Competitors are asked to convert inactive lifeguard stations into inventive follies that expose the beauty of the beach as a winter destination.

“In the colder climates people typically go into hibernation in the winter months,” says Aaron Hendershott of RAW Design. “There are not a lot of events that encourage people to go out and explore the city, which is quite different and quite beautiful. We are trying to fill a gap. The pieces for Winter Stations are conceived because of the cold, not despite it.” 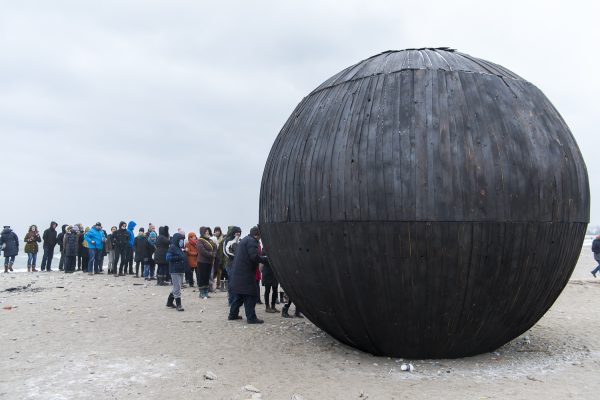 In the Belly of the Bear by Caitlind r.c. Brown & Wayne Garrett. Winter Station installation 2016. Photo by Khristel Stecher. 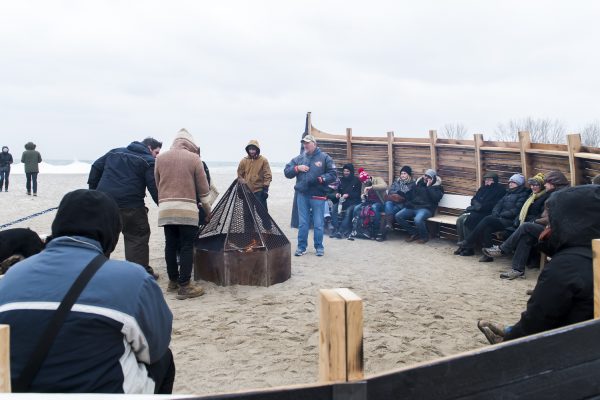 Winter Stations, now in its third season, is one of a handful of national initiatives that celebrate our distinctively Canadian climate, crafting cultural experiences that draw visitors out to explore and socialize in the most extreme weather conditions. The Winter Station program took inspiration from the longer running Warming Huts competition in Winnipeg, where arts and architecture teams create whimsical pavilions along the frozen Red River, offering visitors refuge from minus forty-degree temperatures as well as creative inspiration. 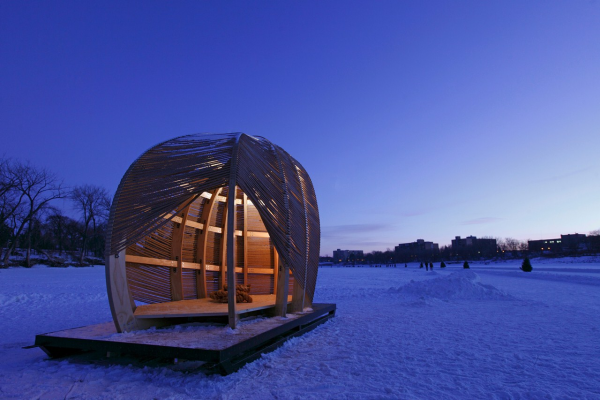 Both Winter Stations and Warming Huts have successfully filled a gap in seasonal programming while encouraging designers to carefully consider the cold as an inevitable reality of where we live. “The obvious constraints from a building stand point are environmental”, remarks Hendershott. “We need to consider the presence of snow and ice, chilly winds, freezing and thawing and thermal expansion, and we need to detail both our buildings and pieces of public art accordingly.”

Yet, perhaps even more importantly, both initiatives offer an alternative to traditional architecture and public art commissions, as controlled platforms for experimentation with temporary typologies. In a similar fashion to the Toronto Sculpture Garden program the Winter Stations and Warming Hut competitions engage young practitioners, allowing them to test new ideas in a highly public setting. For many artists and architects these programs serve as important entries into the field of public art and as launching pads for larger commissions. 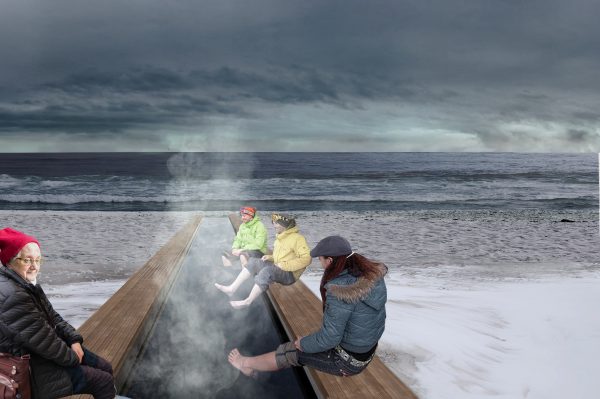 I See You Ashiyu by Asuka Kono and Rachel Salmela. Winter Stations 2017. Ashiyu is about experiencing the elements through haptic interaction with water and steam. The reinterpretation of the Japanese hot spring uses the physical catalytic process of heating and circulating water to spark memory and social interaction.

In Toronto, the success of the Winter Station installations did not go unnoticed by the Waterfront BIA, an organization charged with promoting the economic and cultural vitality of another highly seasonal neighbourhood. In response, the WBIA engaged the Winter Station organizers to create another event employing ephemeral installations to activate the under-appreciated winter waterfront. The collaborative project titled Ice Breakers launches on January 21st in multiple locations off of Queens Quay, as a more curated counterpoint to the Winter Stations. Located in pocket parks along the waterfront each installation is envisioned as a unique urban discovery specifically catered to the local community; a community, which according to Karen Gore of the WBIA, tends to spend more than twice the average amount on the visual and performing arts.

“While Winter Stations is really reflective of the lifeguard stations dotting the beach, Ice Breakers is much more of a response to the urban context and the ongoing revitalization of the waterfront,” say Gore. “This is part of a larger vision for the Waterfront BIA, to engage our population to both shop and dine locally. We want people to realize that Queens Quay is thriving.”

In fact the desire for active waterfront commerce not only served an impetus for the project but as inspiration for the “ice breaker” concept. The team looked to the ships that keep the Toronto harbor and other frozen lakes functioning in the winter by carving transportation and commercial channels. “With this event we are trying to achieve the same thing – to keep the city and commerce active,” explains Hendershott. “At the same time we are hoping that the pieces provoke discussion and allow strangers to rub elbows. The pieces themselves are meant to be ice breakers too.” 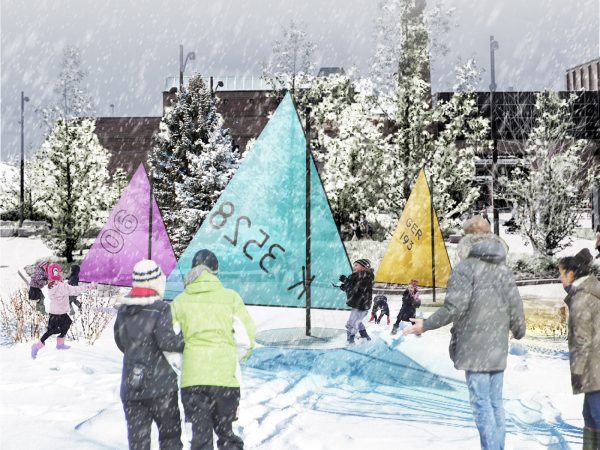 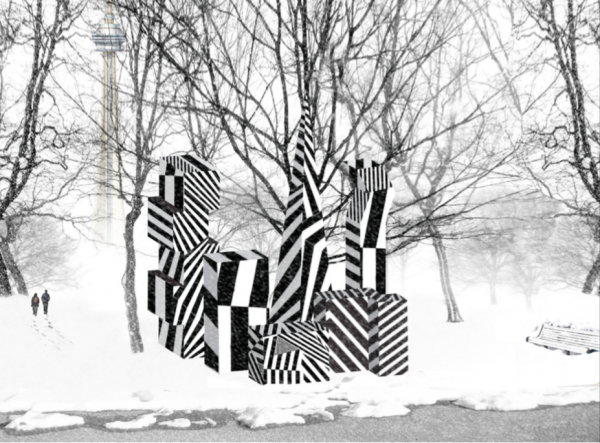 Incognito by Curio Art Consultancy and Jaspal Riyait, Rees Street Parkette. Using architectural massing models as the inspiration for the structures, ‘Incognito’ explores what happens when you make the City’s architectural interventions invisible. Adopting the same camouflaging technology used by warships, the wintery environment will render the installation truly incognito, shaping the public’s interaction with the piece.

From interactive sails to camouflaged massing models to gold-mirrored hands, each of the five planned public artworks is sure to draw attention, prompt discussion and encourage visitors to see at the winter waterfront anew. The works will be supported by an Ice Breakers app (search TOIceBreakers) that provides additional curatorial information and helps visitors to navigate the multiple sites. Both Winter Stations and Ice Breakers illustrate the potential of temporary public art to re-animate our public spaces in the coldest months, extend our cultural calendars and ensure we sustain healthy, active and inspired cities year-round.

Ice Breakers will run from January 21st to February 26th. Join the organizers and the WBIA for a PechaKutcha launch event on January 19th beginning at 7:00pm at Boxcar Social, located at 235 Queens Quay West. The third season of Winter Stations opens on February 20th, 2017.

The Artful City is a Toronto-based collective and monthly blog series exploring the evolution of public art and its role in the transformation of Toronto, both the city fabric and the community it houses. For more information about The Artful City initiative visit: www.theartfulcity.org @ArtfulCity