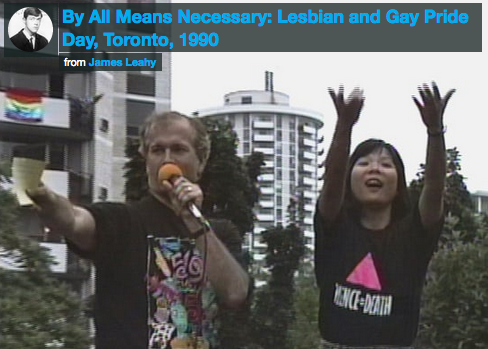 Between 1988 and 1995 (save for 1991 when he did not have a camera) Toronto editor and filmmaker James Leahy documented Toronto Pride, both the street life and parade. Over the last few years he completed editing his footage of one year’s Pride and released it (we posted a number of them here on Spacing). This year he completed editing the 1995 event, the last year of his footage. Here are all seven of his films. Some are quite lengthy. All contain amazing visual records of both what Toronto looked like during this period (especially Church and Yonge Streets) and glimpses of individuals that some may recognize. Below each film is Leahy’s description of the film in his own words.

In this year when Pride’s critical political nature is debated (by some) you’ll see through each film that Pride is and always has been inherently political even as its movements evolve, and a lot of fun too. Enjoy them this Pride Week. – Shawn Micallef

1988: This was my first year filming Pride — you can tell. Highlights include the official opening of the temporary AIDS memorial, performances by local artists David Ramsden, Scott Thompson, David Roche, the Nancy Sinatras, and Sheila Gostick. The parade reaches its climax with “We Are Family.”

1989: For this year I wanted to recapture the physical and emotional feeling of attending Pride Day from beginning to end. It’s quite lengthy and features lots of street dancing to the music of Mustang Sally, a stand-up routine by Sheila Gostick, a couple of songs from the Gay Men’s Chorus, and some dance steps from the Triangle Squares. Parade included. The video begins with a tour of the gay village, filmed the day before Pride — of interest to Church St historians.

1990: This was a wet, cloudy, cool day. For some reason, the theme of love permeated my editing of this footage. We get to see The Heretics perform, a monologue by Sky Gilbert, a song by the Nancy Sinatras, and an auction by Jack Layton and Olivia Chow. The finale was filmed at the AIDS Memorial and features a delightful dance of metallic balloons.

1992: This is one of my favourites. The first year City Council proclaimed Lesbian and Gay Pride Day. The energy was upbeat and positive. Everyone was in a great mood. I’ve included extended performances by Japanese drumming group Wasabi Daiko, Bitch Diva (with John Alcorn and Jenna Reid), and an electrying set by Shadowy Men on a Shadowy Planet.

1993: This short video features the parade, an encounter with two leather men, a saxophone solo, and a surprising karaoke performance by my friend, the late Joe Lobo. I also include a shot of the brand-new permanent AIDS memorial, which was officially opened at this year’s Pride.

1994: Politics marked this year’s parade: a side group of protesters marched to Queen’s Park to condemn the government’s flip-flop on extending same-sex benefits to all workers in the province. The video begins with the image of a ferris wheel on Church Street.

1995: The complete parade, laced with references to the regime of newly elected Conservative Premier Mike Harris.