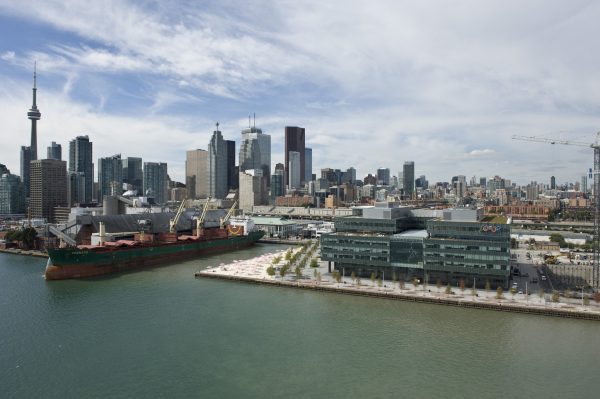 A council committee today will consider the first significant report on the future of Toronto’s Port Lands to surface since the Prime Minister Justin Trudeau, Premier Kathleen Wynne, and Mayor John Tory announced in late June the $1.25 billion in funding for a flood protection berm that will unlock this vast graveyard from another era’s economic ambitions.

The staff report sets out a granular planning framework for several precincts in the 356-hectare area, with a focus on the four zones north of the shipping channel. While the berm, and the associated reconstruction of mouth of the Don, will take five to seven years to complete, the City and Waterfront Toronto will begin shading in the details of a much longer build-out. That process entails everything from contaminated site remediation to figuring out how to knit together the Port Lands and development on the Lever Brothers site, north of Lakeshore.

What begins today will take three decades to complete, at a scale that well exceeds the railway lands.

But if you had read Christopher Hume’s column in the Toronto Star this week, you might have concluded that the City’s planners have all but wrecked the process already. “A travesty,” Hume thundered, condemning the latest iteration of the plan as “short-sighted,” “blinkered,” “thoughtless” and lacking in ambition.

Two decades of waterfront planning, down the drain.

The target of Hume’s vitriol? A piece of the plan that establishes a so-called “production, interactive and creative” (PIC) core district situated on 57 hectares between the Don Roadway, Lakeshore Boulevard and the shipping channel, including the area now occupied by the Pinewood Studio complex.

“How many cities in the world,” he wonders, “would happily hand over a major asset such as the Port Lands to an industry that could operate almost anywhere?”

Hume’s question, essentially, is why would the City plop what he dismisses as a soulless industrial park in a geography meant to showcase Toronto’s future? The prospect, he says, undermines a vision that traces back to the late Tony Coombes, principal advisor on Robert Fung’s 1999 waterfront revitalization taskforce.

This is revisionism, plain and simple. From the beginning, Fung, a Bay Street financier, saw the Port Lands as a place that could house clusters of “new economy” companies, not just as a play zone with mixed-use residential development and plenty of waterfront access.

It’s important to point out that the Port Lands is so vast that these two objectives, as both Fung and Coombes fully recognized, are not mutually exclusive. Moreover, the successive plans for this area have always stressed the goal of situating the right uses in the right places. Which means: public access, housing, some commercial development and recreation at the water’s edge, and other uses further in.

As the planning has evolved over the years, there’s been a broad consensus about the importance of a mix of uses, and participants in the extensive waterfront consultation processes have long expressed their support for developing a waterfront that knows what to do with something as lumpy and industrial as Redpath Sugar.

I am fully in agreement, but this stance, which shows up repeatedly in both city and Waterfront Toronto documents, is more readily embraced in the abstract. Let’s face it: industry isn’t exactly clamouring to build on the waterfront, and most people assume that the residual uses on the Port Lands – scrap dealers, works yards, etc. – will someday magically disappear.

In fact, when we talk about mixed use – and this is true in so much of the city now – what we really mean is mid- or high-density residential with some cool at-grade retail, paired (wherever possible) with a side of jazzy office development. In Toronto’s high growth areas, the employment zones mostly consist of office towers or refurbished brick-and-beam warehouses filled with tech workers. There’s some actual heavy industry here and there – the Nestle plant on Sterling Ave. comes to mind, or the auto-body and construction yards along Dupont – but these are a dying breed, as are employment lands.

To my mind, Hume’s critique – that the studios and other production firms housed behind high fences in blank-walled boxes could be situated anywhere and should be jettisoned – is rooted in the problematic conceit that downtown employment zones ought to be aesthetically and architecturally uplifting.

Why? Were they ever?

We love old factories now, but only because they no longer stink and clang. Today, they’ve been replaced by sprawling suburban warehouses or industrial parks that are all too easy to caricature, despite the critical role they play in sustaining the regional economy, a diverse labour force and the tax base.

I’d argue that if Toronto’s waterfront is to become a genuinely mixed-use area, and not just some Potemkin Village version of the same, we must wrap our heads around the idea that the Port Lands development parcels won’t all become some super cool re-working of New York’s meat-packing district.

City officials dutifully point to examples of architecturally ambitious commercial/office projects in the de-industrialized port regions in cities like Amsterdam. I’m confident we’ll see some of that kind of development. But other parts of this proposed PIC zone may not be much to look at, and I’m also okay with that, as long as the city isn’t parking inappropriate buildings at the water’s edge (which it isn’t).

What’s more, there’s much to be said for city council enacting zoning and planning policies for the Port Lands that are meant to attract jobs, investment and spin-off businesses in sectors other than retail and financial services. If those employment areas happen to be accessible by LRT or bike, so much the better.

In some ways, the outrage channeled in Hume’s column (he quotes planner Ken Greenberg and waterfront activist John Wilson) reminds me of the cocked-up 2010 controversy around the construction of the Corus head office on the East Bayfront – a project secured through some fancy footwork by officials with TEDCO, the unloved agency tasked with managing the city’s waterfront real estate assets.

At the time, Hume (and many others in the city’s architectural establishment) dismissed Jack Diamond’s mid-rise office building as the mistake by the lake.

The Corus project, in fact, was tried and convicted for the full range of urban crimes – lumpen design, inappropriate location, etc. Why couldn’t we have used that space for a signature cultural institution designed by a starchitect, some critics wondered pointedly.

Yet seven years later, thanks to some smart public space design by Waterfront Toronto, Corus is not only an anchor on Queen’s Quay East, but a bit of a magnet, as well as a living, breathing example of how to remake Toronto’s waterfront into something other than a fancy bedroom community.

The PIC core zone proposed in the Port Lands planning framework will deliver exactly those benefits, and likely many more. Hardly evidence of short-sited planning, I’d say this land use strategy offers Torontonians a grounded, practical and, frankly, long-overdue lesson in what it means to build genuinely complete communities.