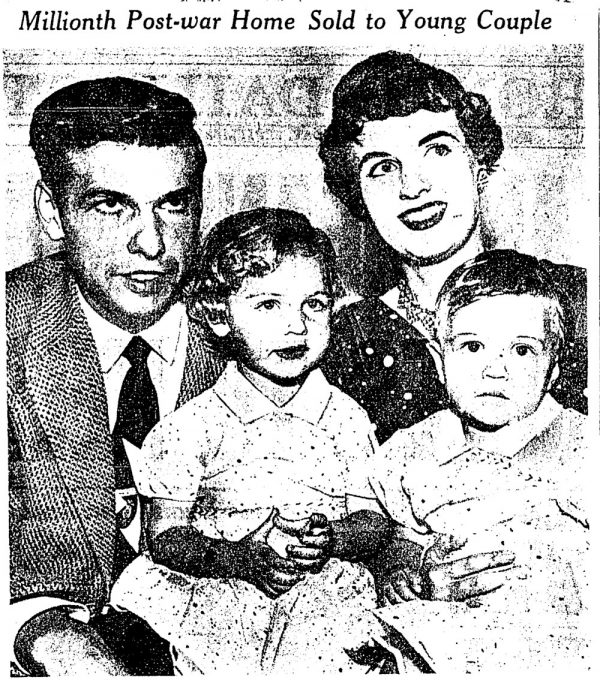 The Camisso family never expected a parade when they bought their first house, a little suburban bungalow in the new Wishing Well Acres subdivision near Sheppard and Victoria Park Avenues, but that’s what they got.

Metropolitan Toronto chairman Fred Gardiner showed up, and so did Scarborough reeve Gus Harris and a handful of cabinet ministers and other dignitaries to congratulate the Toronto couple on the purchase of their first home.

A motorcade traveled from the Wishing Well shopping centre to the Camisso’s property, Lot 121, Beacham Crescent, where there was a welcome banner and speeches.

They didn’t plan it, but Frank and Irene Camisso had purchased the millionth home built in Canada since the end of the Second World War. 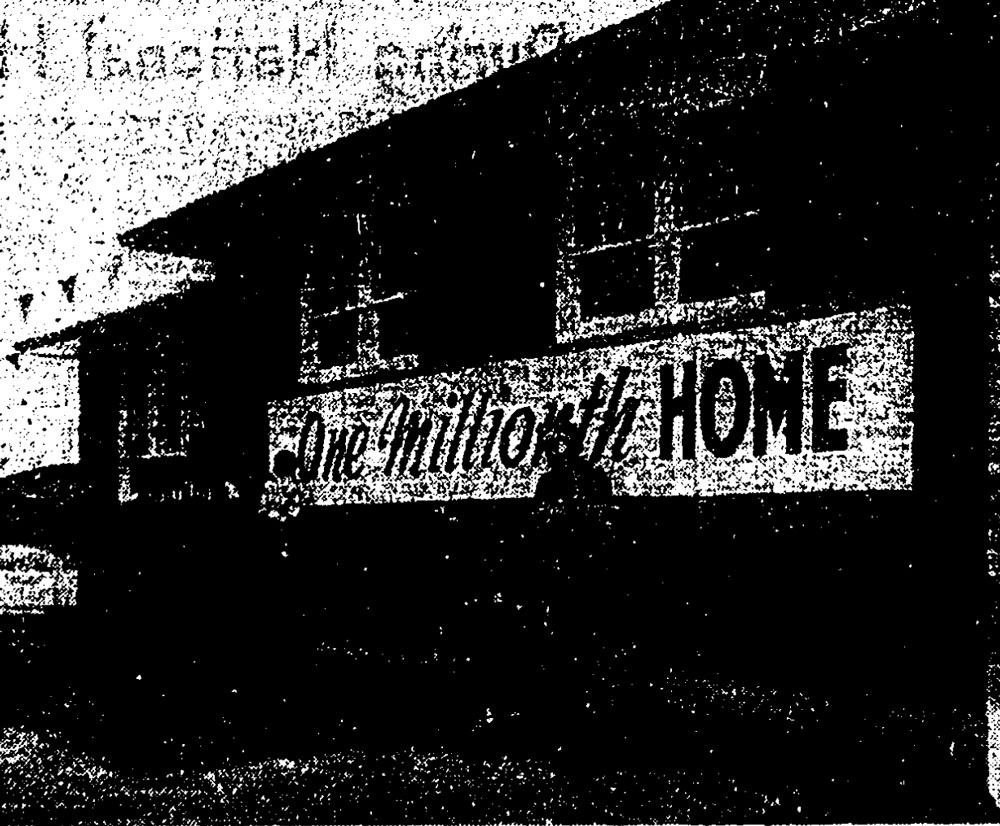 This grainy Globe and Mail photo shows the Camisso’s millionth post-war house on Beacham Crescent the day the family moved in. Globe and Mail, September 15, 1956.

The Camisso’s story was typical of the 1950s suburban era. The young married couple in their late 20s lived at 44 Jasper Avenue in Mount Dennis, a six-room, $75-a-month rowhouse with a troublesome coal furnace.

Every night, Frank had to shovel coal into the home’s heating system. It often ran too hot or too cold, and it frequently died out completely.

“We swore that if we ever got a house it would have an automatic heating system—a good one,” said Frank.

The Camissos liked their Mount Dennis home well enough, but in addition to the cantankerous furnace, it lacked play space for their two young children, Susan, 2, and Alice, 1. The design of their rowhouse allowed cars to pull up to the front door, which worried Irene when the kids were outside.

The couple had planned to purchase a vacant lot in the new suburbs and build their own home. Frank was a contractor in the construction industry, so he knew the business. Their home would have a green tiled roof, a good heater, and a back yard for the kids.

As they planned the house, the young couple drove around new subdivisions looking for ideas. They were in the Wishing Well Acres subdivision near Victoria Park and Sheppard when they saw their dream home. It had a blue tiled roof.

“Everything was just about the way we wanted it. Conventional layout, six rooms and a wonderful heating system, hot water on oil with cast iron baseboard radiators,” said Frank. “We were amazed.”

A public school for Susan and Alice was across a nearby park and the new Wishing Well shopping centre a short walk away. The new Toronto bypass highway—later the 401—was just to the south, making Frank’s commute to the office on Keele Street a breeze.

TTC access was bad, but Irene wasn’t worried because Frank drove her and the family everywhere, anyway. 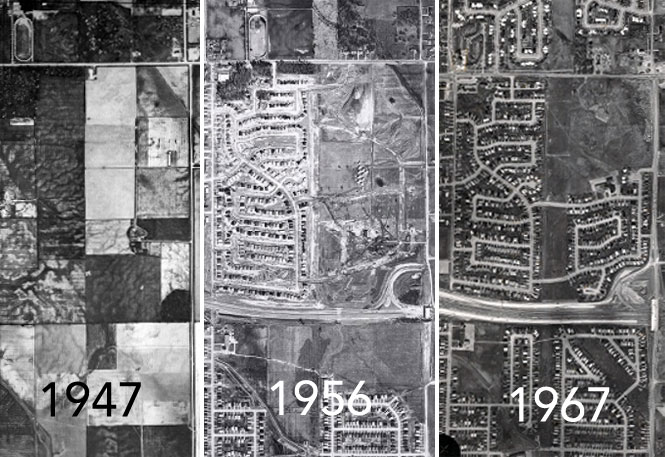 20 years of development in the Victoria Park and Sheppard Avenue area. The Camisso’s Wishing Well Acres subdivision is at centre left. The 401 is in the centre. City of Toronto Archives.

In reality, things weren’t perfect in suburbia. After the Second World War, Toronto and the surrounding towns expanded at an unprecedented rate. Thanks to provisions in the 1946 National Housing Act and the new Canada Mortgage and Housing Corporation, buying or building a house became cheaper and easier than ever.

The endless farmland that surrounded Toronto was subdivided, paved, and developed into an endless tangle of winding streets and cul-de-sacs.

All this expansion put a tremendous strain on resources. The supply of utilities, sewage, and other services needed time to catch up, and the new residents needed shopping centres, churches, and schools as well.

Shortly before the Camisos moved in, the residents of Wishing Well Acres found their taps frequently running dry due a lack of water pressure in the city.

Scarborough officials asked residents in higher elevations to curtail the watering of their lawns in order to keep the pressure in the system high enough to serve everyone.

Schools were also a problem. The school Irene admired for their children was called “primitive” by members of the Town and Country Ratepayers and Community Association in June 1956. A permanent school building promised by Scarborough for 1955 had yet to appear and residents were angry.

“Our children are still going to school in portables, and more portables were bought in today,” said M. J. Fenwick, the president of the 180-person group. 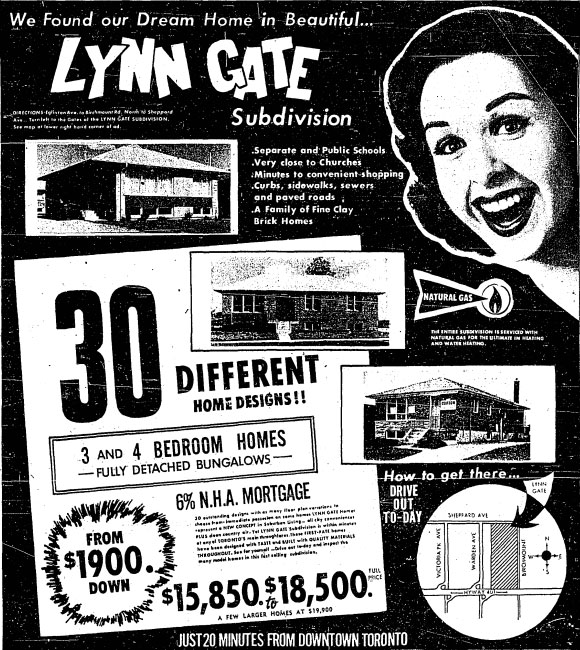 Despite its shortcomings, the Frank and Irene fell in love with the area, but it wasn’t until Irene noticed an identical house down the street with a green tile roof, that the knew they would make their home there.

On September 14, 1956, the family received the keys in a special public ceremony involving local leaders and representatives from the provincial and federal housing authorities. A banner reading “One millionth HOME” was strung across the front of the front of the house.

The Camissos lived on Beacham Drive for about 10 years, until the mid-1960s, when they moved to Wicklow Drive on the other side of Sheppard Avenue.