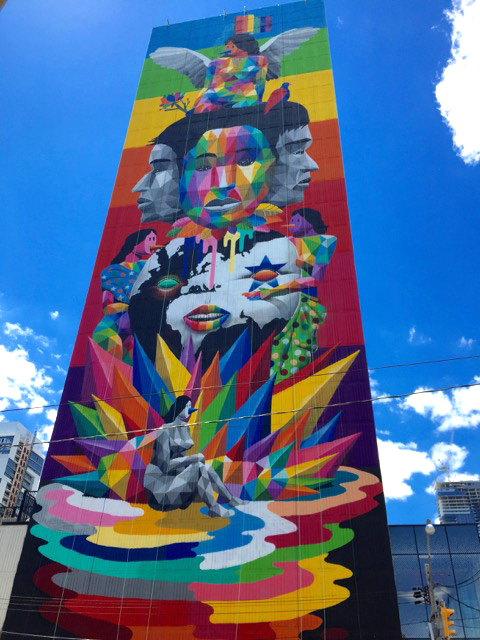 With its high-rises and construction sites, Toronto can often feel overbearingly grey. That greyness is now being met with a blast of colour thanks to Spanish street artist Okuda San Miguel, whose new mural Equilibrium can be seen at the corner of Carlton and Jarvis streets. Painted on the Parkside Student Residence Building, the mural extends to a whopping 23 storeys in height.

In commissioning this work, the STEPS Initiative, a charitable public art organization, has partnered with the city’s StreetARToronto and Knightstone Capital Management. According to Anjuli Solanki, STEPS director of community programs, the idea for the project first came about when the Parkside Student Residence approached STEPS with the vision for a bright, effervescent mural. The Residence wanted the mural to be created by a well-known, international artist, and hoped the piece would speak to the diversity of the area.

To determine the project’s direction, STEPS and its affiliates reached out to local organizations, stakeholders, residents, artists, and students. Knowledge, diversity, and unity were the major themes that community members felt should be present in the piece, all of which feature prominently in Okuda’s work.

After Okuda had completed an initial sketch of the mural, the community involvement continued. STEPS held information sessions with students from the Parkside Student Residence, canvassed nearby neighbourhoods and conducted online surveys asking community members if they would make any changes to the proposed rendering. Many residents felt that the faces on the mural looked too masculine and Eurocentric, prompting the artist to incorporate the comments into his work.

From top to bottom, Solanki walked me through what each image in the mural means for Okuda. At the peak of the mural is the Pride Flag, acknowledging the piece’s proximity to Toronto’s Gay Village on Church Street. As you move downwards, a beaked female figure — who symbolizes our ties to nature — sits atop three heads. On the left and right, the grey-shaded faces are meant to represent knowledge and history respectively. From between the two heads emerges the multi-coloured face of innovation, signifying diversity and humanity’s interconnectedness. The heads are propped atop the earth, which itself is held up by two beaked women, further emphasizing our roots in nature.

In Okuda’s rendering, the earth looks at us with open eyes and parted lips. Like everything in this mural, the world is pulsing with life. The earth’s right eye is ringed by a “chaos star,” a signature in Okuda’s work. While stars often serve as navigation devices, the chaos star implies that we should find our own path rather than following someone else’s.

Of course, Okuda’s work, like any piece of art, lends itself to multiple interpretations. We could, for example, read the mural as a kind of creation story. From the pools of paint at the base of the mural a whole universe conceived by Okuda and the residents of the Carlton and Jarvis area emerges — a metaphor speaking to the life-giving power of art. The tower of creation generates its own stabilizers, as it is the earth and its inhabitants that support the face of innovation.

Okuda’s mural is accompanied by many murals in Toronto’s Gay Village that tell stories of struggle, resistance, and celebration. Christiano De Araujo’s 519 Mural, for example, depicts various queer peoples’ lives in the city, following a chronology from the bathhouse raids to the legalization of gay marriage. Nadijah Robinson and Elicser Elliot’s The History of Drag Lands displays portraits of famous drag performers, their facial expressions suggesting a story behind each smile, smirk and frown. Ella, commissioned by Red Dress Productions, is a mosaic of a woman holding her arm up in victory while being sheltered by a red umbrella, a symbol for sex workers’ rights and their resilience against discrimination and prohibitionist laws.

While the aforementioned murals in the Village embed concepts like love and resilience in historical contexts, Okuda takes a more general approach to these ideals. Because of this, Okuda’s work can sometimes fall into the trap of using played-out tropes and clichéd mantras as a way of expressing his message (like using a multitude of colours to signify different races and the oneness of humanity). While a work like the collection of feminist murals in the Parkdale alleyway at 1468 Queen Street West couches concepts of intersectional feminism within the specific experiences of women from different backgrounds, Okuda uses loose concepts like togetherness and unity.

Depicting general notions and ideals is not inherently a bad thing. Furthermore, this point is not so much a critique of Okuda as it is a criticism of public art more generally. Because public art is geared towards speaking to the largest number of people possible, works of public art can often end up expressing general platitudes that eventually leave the messages devoid of meaning. Because concepts like peace, unity, and harmony can mean almost anything to anyone, they can end up expressing very little.

All that being said, the sentiment behind Okuda’s work is noble, and the final outcome, with its bright colours and massive size, has a magnetic effect.

Equilibrium also compliments another 22-storey mural at the northwest corner of the Gay Village. Adrain Hayles’s mural, which charts the history and impact of music in Toronto, encompasses both the north and the south sides of the building on 421 Yonge Street. The north side of the mural depicts music giants like Oscar Peterson, B.B. King, and Gordon Lightfoot, while including Toronto venue landmarks like Massey Hall and Sam the Record Man. On the south side we see the faces of music legends like Lonnie Johnson, The Band, and Carole Pope. These portraits tower above the city like musical guardians, overlooking the present and future of Toronto’s music scene while reminding it of its past.

Likewise, the faces of Equilibrium also stand as protectors of the city. As Solanki noted to me, because Okuda’s piece is positioned directly behind Grace Toronto Church, the mural’s heads can also be interpreted as angels watching over the city. When you take into consideration the immense size and height of the mural, it’s not much of a stretch to see these angular faces as standing guard over us, protecting the inhabitants that live beneath their strong and constant gaze.

An interview with Okuda San Miguel

Sarah Ratzlaff: What potential lies in the power of the mural/ public art generally? What has drawn you towards this medium?

Okuda San Miguel: You can create the biggest wall or artwork in the city and you know that it is for everyone, for a lot of different people. It is a responsibility. I use this medium because it is the straightest communication with others and because you can change a skyline or an environment or neighbourhood just with a painting.

SR: You have a distinct style. What has led you to adopt this style and what does it mean for you?

SR: What kind of process did you undergo in the creation of the Equilibrium Mural? Were there any specific features of Toronto that inspired you?

OSM: Unusually, I did the sketch first. Then the first layer with acrylic and roller. After that came the multi-coloured background, the sketching on the wall and then paint everything with spray-paint. I take inspiration [from] North America’s Indigenous people, and from my own iconography. And in the process I was inspired by the church in front of the wall and decided to do my Venus angel with the gay flag on the top.

SR: Why the name “Equilibrium”?

OSM: Because we need to respect our roots and Indigenous spirituality related to animals and nature in order to understand the future and for the universal balance of the world.

SR: If there were one thing that you would like people to take away from the Equilibrium mural, what would it be?

OSM: I’d love them to feel it, and get this first message of positivism. If they get more ideas, [it] is ok too. It depends on their own lives and experiences.