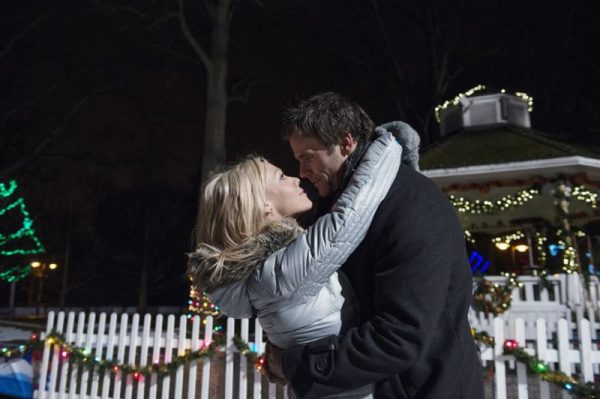 At first glance, the made-for-TV Christmas movies that have come to dominate the holiday season on certain channels – and recently, Netflix – are profoundly anti-urban. They usually feature a woman – or more rarely a man – from the big city who for some reason has to go to a small town for the Christmas season. There, the protagonist discovers that the town embodies the true spirit of Christmas, and invariably meets a romantic partner who persuades the heroine/hero to abandon the urban lifestyle and settle down in this small-town idyll.

The big city is generally portrayed as alienating, materialistic and careerist – everything contrary to the “Christmas spirit.” The fact that the main character is being sent away to work during Christmas is itself symptomatic of this lack of spirit. Often there is a boss and/or existing romantic partner who embodies these negative big-city values and calls regularly, reminding the main character about the stress associated with living and working in the metropolis. The brief establishing shots of that city inevitably involve heavy traffic, the blank glass walls of tall buildings, and soulless corporate interiors.

All this urban negativity is contrasted with the friendliness, strong social ties, slower pace, and rather overwhelming Christmas decorations of the small town. It’s just flowing with the kind of social capital whose passing the sociologist Robert Putnam lamented in Bowling Alone. The contrast feeds on the long-standing imagery of an amoral and atomizing metropolis versus the supposed authentic, transparent social interaction and traditional values of small towns, where people support each other. These movies are ultimately a conservative form of drama.

What’s fascinating, though, is that the appeal of the small town is, itself, strikingly urban. The towns portrayed in these Christmas movies possess the walkability, active public spaces, and low motor vehicle presence that urbanists strive for. They have thriving, walkable main streets full of independent retail shops tightly packed together. Every building faces on to the street, and everyone strolls along the sidewalks and interacts with each other in person. There is always a car-free public square at the centre of town that is the focus of attention and the site of a Christmas festival of some kind, like lighting a Christmas tree, that brings the whole community together. And everyone is always crossing the street safely mid-block despite not looking both ways, because vehicle traffic is always somehow limited and slow. These movies know that speeding cars would ruin the atmosphere they’re trying to create.

Watching a Christmas movie is like the scene in Back to the Future where Marty McFly lands in his town in the 1950s and discovers that the town square, neglected and abandoned in his own time, is suddenly kept up, active and surrounded by bustling stores. It’s also reminiscent of the town of Stars Hollow in the TV show Gilmore Girls (whose spunky female leads and small-town vibe surely make it a relative of the Christmas TV movie), whose action is also focused around a town centre where all the characters bump into each other regularly, and where everyone constantly crosses the street safely without looking. No town in a Christmas movie has a Walmart on the outskirts that has sucked all the life out of its main street, a six-lane fast-moving “stroad” lined with strip malls, or cookie-cutter subdivisions that have drawn all the residents out of the older parts of town.

It’s a vision of the kind of small-town urbanism championed by the organization Strong Towns, which promotes relatively dense residential neighbourhoods around a vibrant downtown main street full of independent stores and services, with attractive and well-used public spaces that bring residents together in person. This vision both looks to the way towns developed in the past before motor vehicles became dominant – a sense of nostalgia shared by Christmas movies – but also to a future for small towns that is economically, socially, and environmentally sustainable.

As my Spacing colleague Glyn Bowerman recently noted, this underlying appeal of small-town urbanism is often reflected in plots that deal with the minutiae of municipal management. After all, becoming interested in city politics is a first step on the road towards becoming a full-blown urbanist.

Development plans, town budgets, the survival of independent small businesses, the activation of public spaces, heritage preservation, and the health of civic traditions all feature frequently. The mayor is often a significant character, trying to sort out some kind of civic issue that forms part of the plot that brings the romantic leads together. It’s as if these movies are subliminally sneaking municipal politics into the viewer’s subconscious, sugar-coated with a heavy dose of Christmas spirit.

My first experience of a holiday season made-for-TV movie, in fact, was flipping channels a few years ago and coming in part way through a movie featuring Jennie Garth (of Beverly Hills 90210 fame) in the midst of a discussion about urban planning. Startled to see urban planning as a movie plot driver, I kept watching. It turns out it was a fairly early example of a holiday movie (technically a Thanksgiving movie), Holidaze (2013). Garth plays a big-city career woman who works for a big-box retailer and gets sent back to her small hometown to persuade the local council to accept one of her company’s developments. (The town is called Streetsville, and although set in Illinois it was actually filmed in Streetsville in Mississauga – a traditional small town now engulfed in a massive suburb).

The townsfolk – including her café-owning mother and B&B-owning ex-boyfriend – are opposed, believing it will ruin the vibrancy of their community and its independent businesses. Garth’s character then gets knocked out in a fall and wakes up thinking she’s lived an alternative life where she settled in her small town with her ex. She ends up using her planning experience to fight the development proposal instead. It’s like a Strong Towns blog post come to life as a drama. As an early example, the plot is both more convoluted and more explicit about its municipal politics than most more recent Christmas movies, but the basic template and underlying urban issues are still often present.

The popularity of the world created by Christmas made-for-TV movies suggests that many people who don’t think they love metropolitan life still want to live in walkable communities where they can stroll along bustling main streets to buy things from locally-owned stores, cross paths with their neighbours at work and at leisure, and congregate together in public spaces for civic activities. They long for that world and live it vicariously through these movies, but don’t really know how to achieve it in a society that is so structured around the car, and that has largely lost the memory of how to develop new communities that are truly integrated, or expand existing communities in a sustainable way. We know what we want, when it comes to how our towns and neighbourhoods work, but we’re still figuring out how to achieve it consistently in real life rather than on the set of an imaginary drama made for television.

Photo: still from the movie Holidaze