Earlier this year, the City of Toronto at long last approved $635,000 to partially fund the Regent Park Social Development Plan (SDP). Initially approved by Toronto Community Housing (TCH) and Toronto Council in the fall of 2007, the City took 13 years to commit funds for the Plan’s implementation. The lag has actually been 17 years, if you count from when the Regent Park revitalization was first approved, in 2003.

Championed by late city councillor Pam McConnell, the Regent Park SDP was the first neighbourhood-based plan of its kind to promise the delivery of social infrastructure and community economic development opportunities through a 12- to 15-year/$1.1 billion revitalization.

The development of the original SDP, led by TCH with support from the City’s Social Development, Finance and Administration (SDFA) Division, was understood as a necessary, non-negotiable element of redevelopment, to be co-designed with a core committee of local community agency leaders between 2004 and 2007.

Following decades of disinvestment by governments and public agencies, the SDP was also the result of sustained advocacy by Regent Park residents. They had a clear vision for how new resources would be best used to enhance existing community assets while addressing systemic issues related to their physical, social, economic and racial marginalization.

In other words, the plan sought to ensure that residents realized a return on reinvestment beyond the replacement of their housing units. It would do so by establishing a dynamic change management framework, along with 75 recommendations related to social cohesion, employment and community services and facilities.

Among these included a mandate to design City spaces expressing the cultural values of faith and ethno-cultural groups, e.g., that recreational facilities accommodated the need for Muslim women to have privacy when engaged in public activities and/or for multi-purpose space to accommodate worship use.

The SDP also called on the City of Toronto to implement an Employment Service Plan that would track and evaluate progress on local hiring/participation for employment and training opportunities. Finally, it also sought to establish new, democratic community governance structures through the Regent Park Neighbourhood Association (RPNA) and the TCH Tenant Council so residents could participate together in local decision-making.

Indeed, as residents await the announcement of the developer selected to deliver the fourth and final phases of the revitalization (due later this fall), they continue to fight for a “refreshed” and fully funded SDP.

For far too long, Toronto policymakers have developed and symbolically signed off plans, strategies, and policies, only to approve city budgets that fail to provide funding for their implementation. The absence of funding from other orders of government, while City Council actively maintains municipal tax increases at the rate of inflation, has been a common excuse.

As a result, the Toronto Strong Neighbourhoods, Poverty Reduction, Youth Equity, and Newcomer strategies, as well as the Toronto Action Plan to Confront Anti-Black Racism (among others) remain under-resourced. Today, the City of Toronto and TCH’s failure to fund the Regent Park SDP also demonstrates one of the ways public institutions and municipal planning processes harm marginalized communities and reinforce systemic racism and inequity in our city. 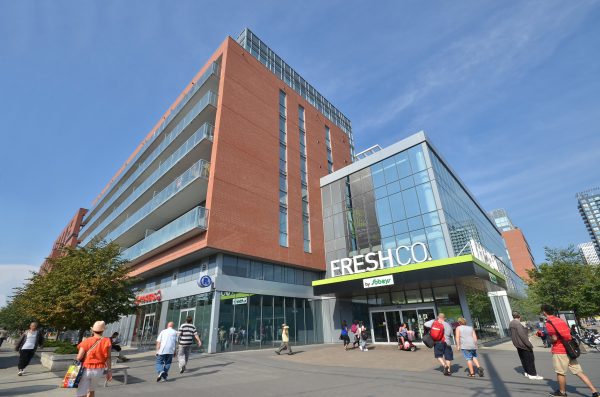 In the winter of 2016, Mayor John Tory and city staff celebrated the opening of the new Regent Park Community Centre. In a city press release, McConnell described the facility as “another important piece of social infrastructure in Regent Park” that is “highly integrated,” “designed with extensive input from the community” and a “reflection of the social fabric of the dynamic neighbourhood.”

It is important to question how the Regent Park revitalization can be considered a success if those responsible for the well-being of the community conflate the delivery of physical infrastructure with the goals and actions defined in the SDP.

A closer analysis of public documents associated with the redevelopment illuminates how the City and TCH have often prioritized market interests throughout the revitalization.

While the SDP remained “uncosted” and unfunded in 2013, the Regent Park development context plan was amended for phase three of the revitalization to facilitate two important changes: first, a shift from a six-phase project to a five, and second, to increase the number of residential units on-site.

These changes permitted a substantial increase in the number of residential units constructed throughout the revitalization, starting from a total of 4,775 units in 2003 to a total of 7,500 in 2013. Although this expansion includes the original 2,083 units of social housing that TCH pledged to replace (some of which will be off-site), the increase in market condos reduces the proportion of social housing units in the neighbourhood, from 44 percent to 25 percent.

Because the revitalization project was originally pitched and planned to be a mixed-income community, the Regent Park SDP was not designed to foster social cohesion in a neighbourhood that was predominantly market-based.

In 2009, the City said that it had learned several lessons from the first phase of the revitalization. These findings resulted in the expedited development of the Pam McConnell Aquatic Centre, the Regent Park Community Centre, the Athletic Grounds and the Daniels Spectrum arts and cultural facility.

Designed and programmed in partnership with local residents and organizations, these changes finally delivered the physical infrastructure the neighbourhood deserved, and much earlier than previously planned. However, the accelerated construction of these assets also made the area more desirable for condominium buyers for phases two through five of the re-development.

Since being approved by Council, these changes also coincided with the city’s decision to approve the sale of TCH lands to The Daniels Corporation for phase three of the revitalization.

The implications of this market orientation are particularly evident, given the challenges low-income residents have faced accessing free public programming offered at the new, state-of-the-art neighbourhood pool. According to the CBC, parents such as Hani Afrah camped out in front of City buildings overnight to ensure their children can participate in critical after-school and recreation programming as they are being forced to compete with new residents and those who live outside of the neighbourhood.

In 2017, the Regent Park SDP Stakeholders Table was reconvened to update the plan and clearly define 53 new implementation actions related to community building, communications, employment and economic development, and community safety. Nineteen of these were flagged for prioritization and will cost approximately $6 million to carry out over the next five years.

While local councillor Kristyn Wong-Tam in 2019 moved a motion calling on the City to “live up to the promise of the Regent Park revitalization” and take responsibility for the SDP, the Social Development, Finance and Administration (SDFA) Division failed, again, to include the costs associated with the implementation of the refreshed plan in its 2020 budget request.

With on-going calls from the community for greater transparency and accountability, and then the publication of the Auditor-General’s review of TCH revitalization activities in March 2019, SDFA was asked for an update on how much TCH and its community partners had invested to date on community infrastructure throughout the revitalization.

The subsequent report to Council revealed that TCH had only contributed $864,000 as of 2019, while Daniels had provided $7.46 million in direct and indirect investment for a total of $8.3 million between both parties. With employment being a key pillar of the original and refreshed SDP, the City’s Toronto Employment and Social Services (TESS) Division also reported that approximately 583 jobs were created throughout the revitalization. To the dismay of many, the Division admitted it did not track the breakdown of full- and part-time positions created between 2009 and 2013.

When it did begin to do so in 2017, only 33 out of 292 active jobs related to the revitalization were full-time opportunities.

Ismail Afrah, a community consultant on the SDP at the Centre for Social Innovation, spoke before the City’s Economic and Community Development Committee on January 14, 2020. “When the revitalization was created it was said that it stood on two legs,” he said passionately. “The first one was physical development and the second one was social development. If you’ve spent about a billion dollars on physical development and you spent [approximately eight million] on social development, this would be about .8 percent. How do you suppose a community is revitalized if one of its legs is only at 0.8 percent?”

One week later, members of the Regent Park community returned to City Hall to tell the budget committee that the City needs to take ownership of the SDP and invest $635,100 of the $2.55 million for which it is responsible, according to the new SDP.

This partial investment will begin the implementation of the prioritized actions. A further $1.4 million will come through alternative sources, including the United Way, a donation from SDFA’s former executive director of Chris Brillinger, TCH grants, and a community trust fund.

However, an additional $2 million is still needed to fully fund those 19 priority actions. There are also 34 that remain unbudgeted.

Governments and public agencies must ensure that Regent Park’s low-income and racialized residents can thrive in their community: the fourth and final stages of the revitalization are important opportunities to deliver equitable outcomes for residents.

Beyond full funding for the SDP, it is also critical that the interests of TCH residents are prioritized. This must be done by maintaining public ownership of land, prioritizing local access for public programming, and transparently reporting on the progress of redevelopment.