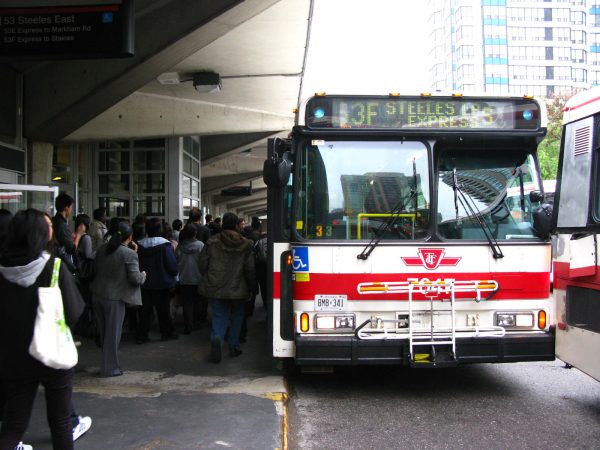 The TTC has been steadily bringing back vehicle operators since early September as ridership levels rise. As of October 9, buses were running at about 50% of normal capacity, with 36% and 31% for streetcars and subways respectively. This is good news.

Earlier in the fall, the service and ridership growth dovetailed with the commencement of the school year and more people heading back into their work environments. Average weekday bus boardings peaked in mid-September, at 710,000 rides, but slipped back to 690,000 as of the week before the provincial government ordered the City of Toronto to return to a modified Stage Two in order to contain the alarming rise in COVID numbers.

Says TTC spokesperson Stuart Green, “We are putting out close to 95 per cent of pre-pandemic bus service to meet that demand and targeting additional scheduled and unscheduled (RADs or run as directed, meaning they can be put where they are needed in real time without impacting regular schedules) service to the busiest routes,” such as Keele, Dufferin, Jane, Finch, Lawrence, and Markham Rd.

These figures offer (yet another) reminder that the TTC’s route network closely reflects the city’s racial and class divides. Indeed, the TTC has been periodically releasing so-called “heat maps” (see page 5 of link) indicating where the most crowded corridors are. To no one’s surprise, they’re mainly in the suburbs, and include such heavily used trunk routes such as the 96 Wilson and the 35 Jane.

These routes also work those areas of the city hardest hit by the pandemic, and there are not-infrequent accounts of buses packed with people for whom the work-from-home option is not, well, an option.

The question to my mind is whether packed buses pose a public health risk as the second wave continues to swell.

Certainly, neither the province nor the City have issued new edicts about bus use, beyond the basics (mask-wearing, seat restrictions, etc.). As Spacing contributor Trish Woods wrote earlier in the lock-down, there was, at the time, no evidence of transmission connected to transit usage.

The TTC itself has adopted a policy of trying to maintain a maximum of 25 riders per vehicle, which is apparently a benchmark now in use in many North American cities. Green says 92% of all trips are less than half full. Yet for a minority, passengers find themselves in uncomfortably close conditions.

There’s an interesting back story about these figures that involves an innovative use of a new-ish technology for which the TTC deserves credit.

From the early 2000s, the commission was planning to install sensors on bus doors as a means of calculating how many people got on and got off. But the implementation took a long time, and it was only in 2017 that the entire fleet had been outfitted with these devices. (The TTC is fitting out its streetcars with the same gadgets, but it will take a few more years before that project is finished.)

TTC officials say the envisioned application for the sensors was to provide more granular data on ridership, but the information would only be aggregated and transformed into service adjustments periodically (the TTC revises its service levels at six week intervals).

But after the pandemic began, TTC officials realized the agency’s control centre could gather and analzye that boarding data on a daily basis, and use it to gauge whether there were enough buses running to maintain the lower ridership thresholds required for social distancing. These devices, and the data they produce, have been instrumental in allowing TTC official to produce those heat maps.

Initially, the TTC pegged that figure at 15 passengers per bus, but raised the limit to 25 in the summer. When this nearly real time data indicates that routes are exceeding those thresholds, the TTC will dispatch extra buses.

The wrinkle is that drivers themselves do not limit ridership to 25 passengers per bus; Green says operators in “rare” circumstances can bypass stops if their vehicles are too full, but only if they get permission from transit control.

With winter, cold season, flu season and the second wave all on a collision course, I’d say it’s worth asking whether the TTC needs to be even more vigilant about holding to those 25-passenger limits in order to protect riders and drivers.

The decision is obviously fraught: many of the people on those suburban trunk lines are expected to arrive to work on time, and won’t be thrilled to see a half-full bus barrel past, especially on a cold winter morning. What’s more, the TTC doesn’t have a whole lot more slack if 95% of its bus fleet is already in service.

Yet these are also the Toronto neighbourhoods with the highest infection rates, the lowest testing, and the greatest prevalence of the sorts of co-morbidities (respiratory disease, diabetes) that can exacerbate a case of COVID-19. Location data is critical in driving the public health response to the pandemic, and the TTC’s service should be no exception.

The point is that a packed, steamy bus is surely as risky an environment as, say, a gym or an indoor restaurant. The TTC, to its credit, has worked hard to confront this issue. But it may be time for the City and the agency to do even more.