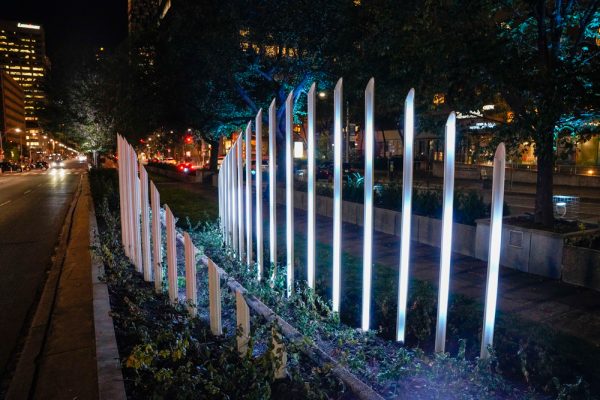 In mid-October, University Avenue lit up as Radiant Journey, a light installation by the Friends of University Avenue, was officially launched. Along the road’s median, for the few hundred metres from College Street south to Elm Street, vertical reeds of LED lights now pulse to a rhythm dictated by an audio feed. They are arranged in a wave-like pattern and give the dynamic impression of a heartbeat travelling down the avenue, visible to pedestrians, cyclists, drivers, and patients and staff looking out from the windows of nearby hospitals. Radiant Journey is expected to be the first phase of a wider project known as “Reimagining University Avenue.”

The project was spearheaded by Christine Ralphs, the president and founder of Friends of University Avenue, as a result of her personal experiences with regularly visiting the Princess Margaret Cancer Center for her husband’s cancer treatment as well as her own. She was inspired to create a lighting display like Radiant Journey in 2017 when she noticed how dark and unwelcoming that stretch of University Avenue was at night, and wanted to construct a symbol of hope for health workers and patients at the hospitals. In the context of the pandemic, it became even more striking as a tribute to the resilience of doctors and nurses.

The original concept for this project was a large gemstone that would be suspended from the hospital roofs over University Avenue and illuminate it from above, but as the pandemic took hold in Toronto, the amount of resources that the hospitals were required to contribute in order to make the gemstone a reality no longer seemed appropriate. Thus, the idea evolved into something that made more use of the space at street level.

Brad Hindson was one of the main designers behind Radiant Journey. He describes how, during the site analysis, the idea for these specific reed sculptures came in part from noting that, for several months every year, the foliage in Toronto is bare or browning. Paul Boken, who also played a central role in design and worked closely with Hindson, describes the sculpture as “growing light out of the ground,” both combating the darkness of University Avenue at night and enhancing the existing trees and plants.

“It takes a lot of impact to rise above the noise of the city,” says Boken about the design of Radiant Journey. He stresses the importance of lighting when it comes to placemaking, going beyond simply lighting the pre-existing trees and plantings on the median, and the need to ensure that the light patterns looked natural. “The light show is driven by mathematical algorithms meant to imitate nature,” Boken explains. “The reeds are listening to music, which makes ripples of water.”

Having the light installations built on a road median proved to be an important design constraint, in that the safety of drivers and pedestrians travelling along the road needed to be guaranteed. In order to minimize glare and potential distractions, the reeds face inwards; the light bounces in and then outward, which softens it, so that it is still visible but significantly dimmer than nearby signs and traffic lights. The floodlights trained on nearby trees to illuminate them are also carefully covered to prevent glare. Boken described the safety precautions as “a mixture of shielding, orientation of fixtures, and the intensity of fixtures, all balanced again traffic codes.”

Reimagining University Avenue is a fully citizen-led initiative and is independently funded, but getting Radiant Journey installed onto public land required collaboration with the City of Toronto in a relatively rare partnership between the private and public spheres. “Our hat goes off to the City,” says Brad Hindson, who also notes that Councillors Joe Cressy and Mike Layton were particularly instrumental in the process of getting Radiant Journey approved. Physically installing the sculptures did not require redirecting traffic, large-scale digging on the medians, or adding extensive new infrastructure in order for the light show to be effective, indicating that citizen collaborations with the city to beautify Toronto can be implemented without encountering significant infrastructure barriers.

The opening ceremonies for Radiant Journey, held on the front lawn of SickKids on the evening of October 19th, embodied the collaboration between citizens and the city as City Councillors Joe Cressy and Mike Layton, along with Marsha Rovan, the creative director of Friends of University Avenue, made speeches to introduce the installation. Mayor John Tory made an appearance in a pre-recorded video message, as did Christine Ralphs, who was undergoing cancer treatment at Princess Margaret Cancer Centre; some attendees brought signs to the event in support of her and her significant contributions to Reimagining University Avenue. In the final component of the opening ceremonies, Radiant Journey came to life all at once, illuminating the block in a lovely realization of Ralphs’s vision. She passed away at the end of October, not long after the opening. 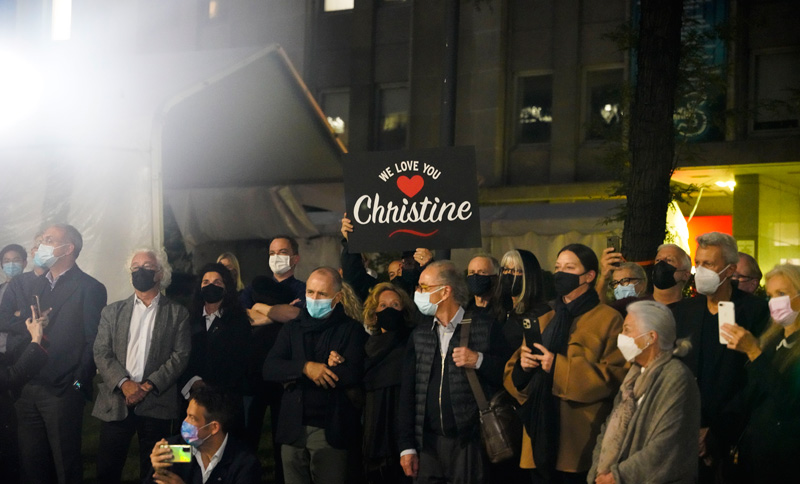 Brad Hindson not only sees Radiant Journey as a rewarding piece on its own, but also hopes that it helps pioneer further partnerships between citizens and the municipal government. “I hope the City sees this project as a success and allows more installations like this,” he said. “It would be great if people copied this model elsewhere in this city and in others.”