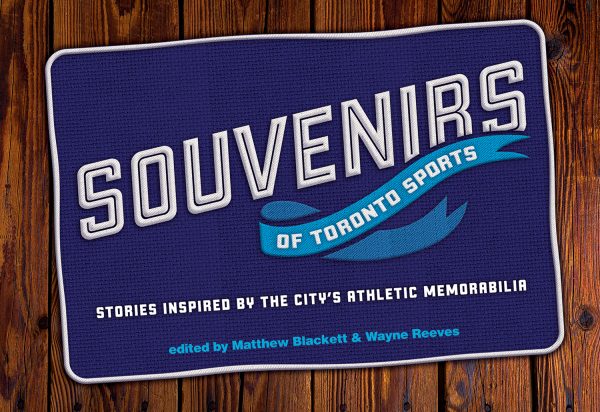 Spacing is happy to announce the release of our tenth book, Souvenirs of Toronto Sports: Stories Inspired by the City’s Athletic Memorabilia. You can purchase it through the Spacing Store web site or visit the shop at 401 Richmond St. West.

Sports have been so omnipresent in my life that my earliest memories involve them. My father was a professional boat racer when I was born, so I spent the weekends during my toddler years on beaches watching hydroplane boats zoom around. He became both my soccer and hockey coach when I was six and would remain in that position until I graduated high school, guiding my teams to the highest competitive levels in those youth leagues. As head coach, he collected items from exhibition games, tournaments, playoffs, you name it. 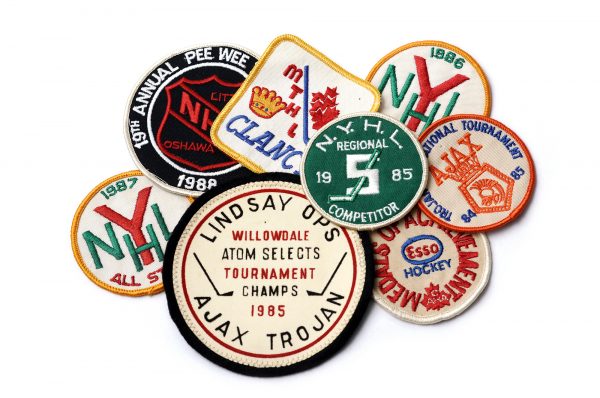 Crests and patches from 1980s hockey tournaments I participated in.

His knack for finding small but meaningful keepsakes was passed down to me, both literally and figuratively. When I turned 40, he gave me a package of those items which are now a part of my own collection of souvenirs. I started the same tradition with my son when we created the “Big Box of Fitz,” where he’s collecting his own batch of sporting memories.

Over the years, whenever I’ve moved out of a place, I’ve used the occasion to purge some of the items I’ve collected during my time there, but I usually take the opportunity to look though the things I’ve previously chosen to keep. For 25 years — from my parents’ home to nine different apartments to finally my own house — I never discarded any of the sports souvenirs or memorabilia from my youth. Medals, patches, pins, tickets, programmes, even trophies…. 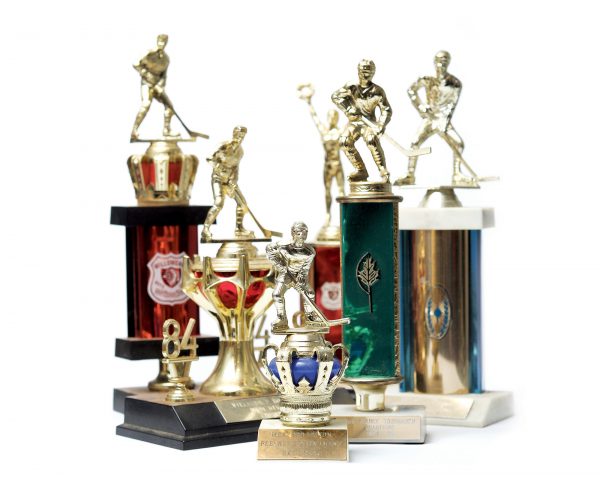 A few of the trophies I won in my youth.

Upon seeing these objects again, I’m quickly transported to another time in my life, conjuring up old victories with friends. When I was researching my previous books for Spacing, I often came across unique athletic items within the City of Toronto’s artifact collection that would stir up similar nostalgic feelings. The more I dug, the more amazing items I found from important events and eras of the city’s past. From Ned Hanlan’s oar to the first ticket to the Blue Jays at the SkyDome to the woollen jersey of Doris Butwell, the souvenirs in this book give us a glimpse into the lives of Torontonians from years past. Part of living in a city is the shared experience of cheering on local sports teams — the memorabilia from games, events, and clubs act as a portal to those long-forgotten moments.

Throughout the last year, I have worked in tandem with City of Toronto chief curator emeritus Wayne Reeves to comb through the City’s collection of over 150,000 artifacts to find items to inspire our stable of writers to share stories of the city’s athletic history. Here is a breakdown of the book’s primary chapters: 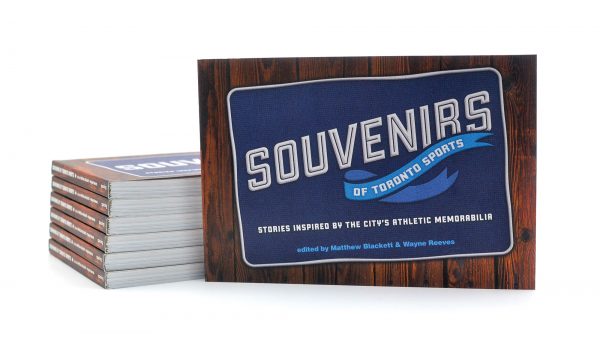 A FEW GEMS FROM THE BOOK

The following are a few items that appear in the book that I truly love and want to share (I took over 4,000 photographs of the items we liked before settling on the batch we used in the book). As a lifelong Toronto sports fan, I’m fully aware of the heartache that comes from cheering on our local pro teams, though the recent successes of the Raptors and TFC have certainly softened the pain. But seeing these items brought together reminds me how rich the history of athletics is in this city. 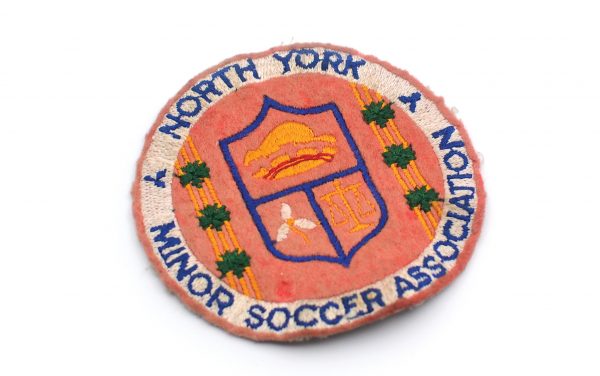 ABOVE: This item doesn’t appear in the book, but it’s worth sharing. The Jays held a 3-1 series lead over the Kansas City Royals in the 1985 American League Championship series only to lose the final three games and fail to advance to the club’s first World Series. This two-inch wide pin-back button was pre-manufactured in the event of a series win and is considered a rare collectible. 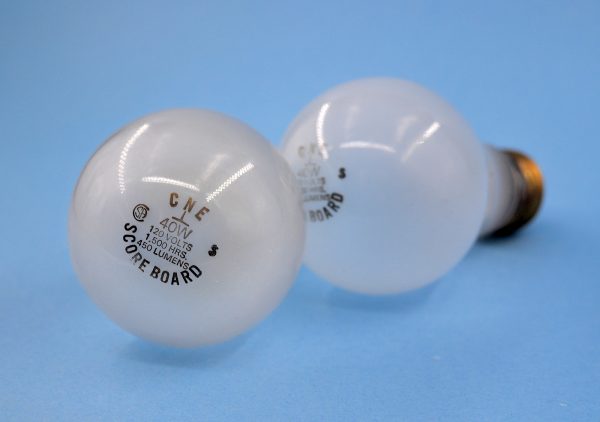 ABOVE: Floodlights and an electronic scoreboard were installed at the Canadian National Exhibition grounds in 1958, enabling the Toronto Argonauts football team to relocate there from Varsity Stadium. These two bulbs were used in the CNE scoreboard. 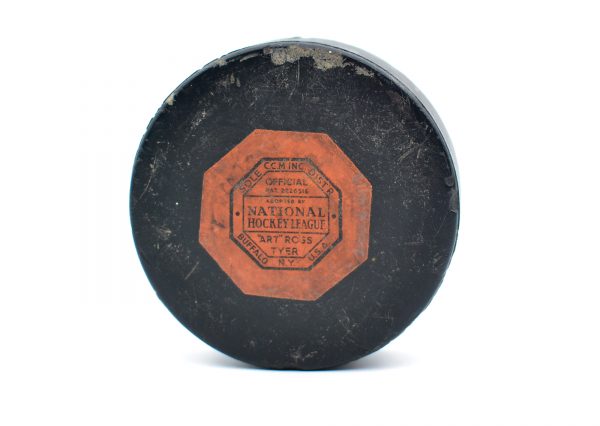 ABOVE: The Toronto Maple Leafs hockey club has dominated the city’s sports scene for a century. This game-used puck is from the 1951 Stanley Cup Finals, won by the Leafs. 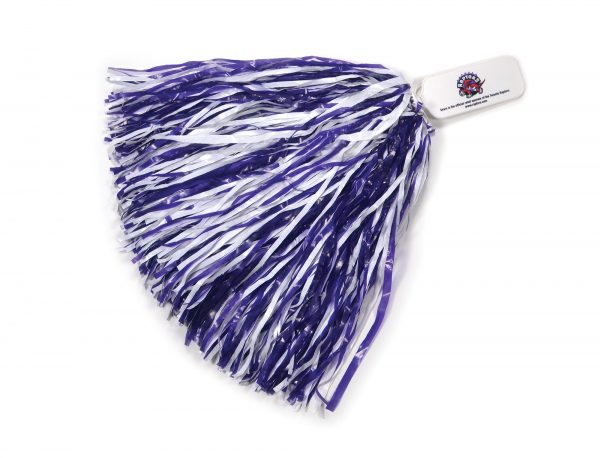 ABOVE: Sporting the Toronto Raptors’ 1995-2008 logo, this pom-pom was likely given away free to hometown fans by Sears Canada, one of the Raptors’ earliest corporate sponsors. 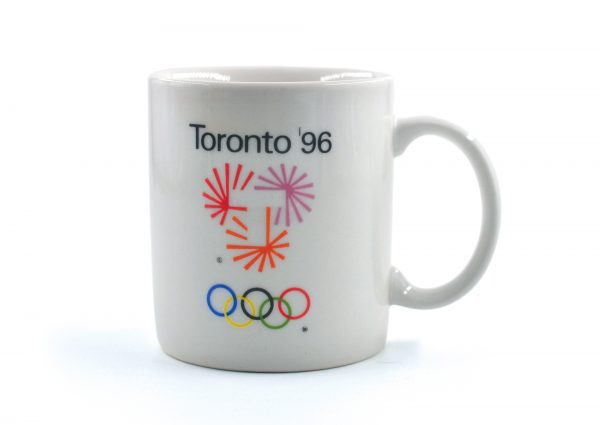 ABOVE: The Toronto ’96 Olympic bid logo was designed by Canadian design icon Stuart Ash. This mug was made between 1986 (when Toronto launched its bid for the 1996 Summer Olympic Games) and September 18, 1990 (the day the Games were awarded to Atlanta).