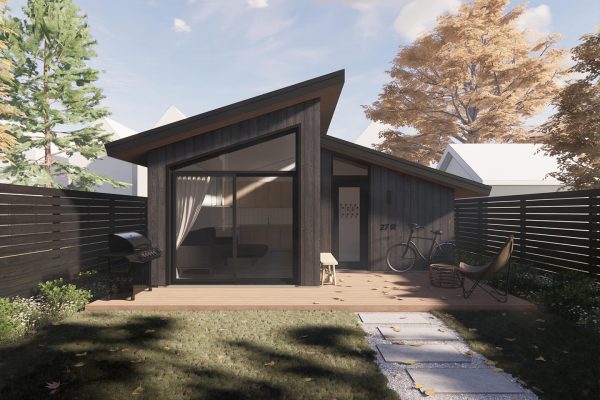 While most people were riveted last weekend by the wretched spectacle of extremist-palooza in Ottawa, the busy beavers of the tiny world of ratepayer activism were filling their own airwaves with tactical misinformation about “garden suites,” the latest planning outrage to be visited on Toronto’s tranquilly entitled residential neighbourhoods.

In advance of a debate tomorrow at city council about a proposed garden suites policy, the Long Branch Neighbourhood Association, in Etobicoke, over the weekend was tweeting up a storm about how 1,900 sq.-ft backyard mansions would allegedly trigger what amounted to an unprecedented urban clear-cutting campaign.

The Long Branchers were amplifying some disingenuous messaging from FONTRA’s two spokespeople, Geoff Kettel and Cathie Macdonald, about how the search for affordable housing will “destroy single family living.”

They, in turn, were sharing around some fake news from Barrie about how the scourge of garden suites, permitted as of late 2019, had changed their neighbourhoods because of tree loss. “Investors began to dramatically outbid families wanting to buy a home,” claimed Barrie’s character police. “Neighbourhoods began shifting from owner occupied to investor owned.”

As FONTRA shouted in an e-blast last week, residents should tell their councillors to “[a]sk for a deferral!” “Evidence is accumulating to show that Garden Suites plus lack of control on land speculation will risk changing neighbourhoods from being resident-owner occupied to being investor owned,” the group claimed, without — needless to say — offering up a shred of evidence. “The Garden Suites by-law and policy is not ready for approval. It needs to go back for further consultation and significant changes to address concerns.”

As I’ve written in this space previously, many residents associations, but FONTRA in particular, make wildly exaggerated claims about the representativeness of their organizations. The reality is that they take positions that have been approved, at best, by their executives, on behalf of memberships that exclude, either by design or happenstance, tenants, lower-income people, future (notional) residents, and all the homeowners who wouldn’t go anywhere near the reactionary politics of residents’ associations.

And while there’s no law limiting how these groups express themselves to council, I still believe the city should only recognize associations that make some demonstrable effort to organize themselves in inclusive ways. But that’s never going to happen, and here we are again.

The garden suites policy wasn’t written on the back of an envelope. It is the result of an extensive research and consultation process, a thorough vetting by a council committee, a lengthy deputation session featuring the folks who always turn up to portend that the sky is falling, and some further tweaking by the planning department. A survey of 4,000 residents found that 70% strongly or somewhat support garden suites.

What’s more, the provincial Tories, in an odd twist, are way ahead of Toronto on these kinds of reforms, with approved or planned changes to the relevant legislation that would enable more missing middle housing in house neighbourhoods, as well as accessory dwelling units (ADUs), as garden suites are called in every other jurisdiction except Toronto.

But it’s not a stretch to imagine that there are enough councillors who obediently approve whatever nonsense their residents’ groups demand, and, in this instance, will vote to defer in an effort to ensure that the policy dies the death of a thousand small amendments.

In its initial staff report on garden suites, the city’s planning department did acknowledge that other jurisdictions had in recent years enacted as of right ADU approvals. It would have been helpful if the city had shared some of the experiences of these jurisdictions as a means of bolstering the argument that ADUs don’t wreck residential neighbourhoods.

One especially rich tranche of data comes from California ADU, which is a project by the University of California, Berkeley. California’s ADU laws date back well over decade, and they have confronted some of the most notorious expressions of NIMBY politics. Originally cast as small-scale infill as part of a climate agenda, the rules, passed in 2008, have been regularly expanded and improved to enable more homeowners to add ADUs in ways that don’t alter local character and respect neighbours.

A study published last year by California ADU found that the municipalities approved about 8,000 to 9,000 ADUs for the entire state annually in 2018 and 2019. (If you do the math, those figures would translate into about 650 garden suites for the entire City of Toronto each year, hardly a tidal wave.) Most of California’s ADUs are detached studio or one-bedroom units, typically about 600 sq.-ft, or less than a third of the preposterous claim advanced by the Etobicoke residents group. In terms of construction costs, they seem to be far less expensive than Toronto’s laneway units, with 71% coming in under $200,000. (Toronto’s laneway houses run now well in excess of $300,000.)

The author of many of California ADU’s research papers is urban planning scholar Karen Chapple, who recently took on the position of director of the University of Toronto’s School of Cities. When I spoke to her on the weekend, she pointed out that as homeowners and residents became more accustomed to ADUs in places like California and Oregon, e.g., via walking tours to showcase some of the more innovative ADU architecture — the fear fell away. “That kind of learning is really critical,” she said, both for incumbent homeowners as well as those who are thinking of investing in ADUs.

She also noted that many people came to realize that ADUs did not, in fact, destroy the look and feel of the communities. “You can’t make the `neighbourhood character’ argument anymore.” In other words, the Chicken Little factor — which is the preferred rhetoric of the likes of Kettel and Macdonald, and council lapdogs like Mark Grimes — is off the table.

I’m under no illusion that garden suites will make a huge dent in affordability. What’s more, it will take a long time, and many approvals, for these kinds of projects to begin re-populating economically inaccessible neighbourhoods that have been bleeding residents for years.

But if they help push the city past this utterly unhealthy notion that neighbourhoods are almost exclusively for homeowners, then Toronto can begin to move ahead with all the other forms of gentle density — duplexes, triplexes, low-rises, etc. — that were once commonplace, but have been systematically edited out of our concept of what neighbourhoods are or can be.

It’s hard to know what will happen this week. Given council’s shameful handling of the rooming house plan last year, I wouldn’t be shocked if this proposal got punted back to staff because of a bunch of cocked up objections from the fear-mongerers who have opposed secondary suites and mid-rises on major arterials and even bells on children’s playgrounds.

As a point of principle, the city’s low-rise neighbourhoods shouldn’t be gated communities for real estate millionaires, which is precisely what they’ve become. The Garden Suites plan is a small move, but an important part of a much broader effort that will be required to turn this dismal story around.