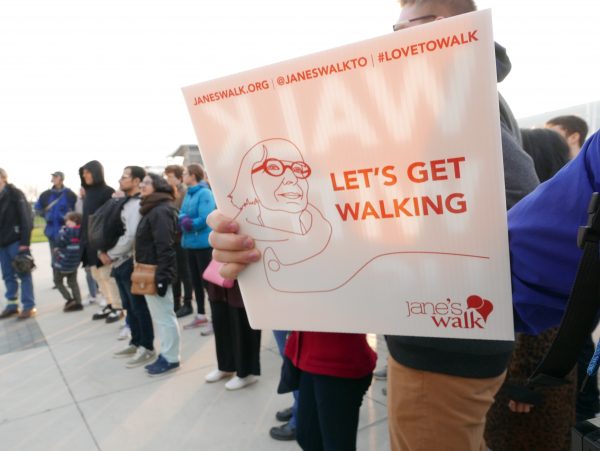 Urban activist Jane Jacobs’ birthday is this week (May 4) and many Torontonians will be celebrating by attending the Jane’s Walk Festival this weekend. This year, there are 84 walks to choose from, as well as film screenings, yoga sessions and even a trip down the Rouge River. After two long years of pandemic uncertainty, the walks are back in person, although there are a few digital tours online for those unable to venture out.

This year Jane’s Walk is partnering up with the Provocation Ideas Festival, a new series of events in Toronto that “aspires to create a new public square of spirited discussion that is rooted in local communities.”

“We’re bringing people together to exchange ideas,” says Kate Fane, Communications Director for Provocation. There’s plenty to discuss: “affordable housing, the climate crisis, anti-black racism. The real priority is to focus on solutions to entrenched issues in our society,” she says. “We’re looking to local leaders that are driving solutions.”

Two of the walks this weekend are being co-produced by Provocation and will be led by local residents involved in finding solutions to real urban issues.

How Public is Public Art?

Join Adam Cohoon and researchers from AccessArt.ca on Saturday May 7 at 2:30 PM in the Canary District.  Register here.

Artist and accessibility activist Adam Cohoon will be leading a tour around the Canary District to discuss public art and how it can often be inaccessible for people with disabilities. As a resident of the neighbourhood, Cohoon explains that there was a lot of public art installed for the PanAm Games. “As a fan of public art, I do enjoy the pieces but they’re just not very accessible,” he says.

In some places, sculptures or installations can emerge from the ground unexpectedly, creating hazards for the visually impaired. Sometimes the signage explaining the installations is embedded into the ground, explains Cohoon, making it difficult to see for people in wheelchairs (Cohoon himself relies on a wheelchair to get around). Visitors, whether they’re disabled or not, also need to rest during their walks, but there is a dearth of benches and shade in the area.

“The art is supposed to fall under the AODA standards,” says Cohoon, referring to the Accessibility for Ontarians with Disabilities Act, “but it often falls short.” It’s up to activists like Cohoon to bring people’s attention to the shortcomings. “We’re always looking for creative ways to talk about disabilities and public access,” he says.

Lawrence Heights: A Community in Between

Hear from Kumsa Baker and Lawrence Height residents as they discuss their vision for the redevelopment of the neighbourhood in a panel discussion streamed on Zoom, Saturday May 7 at 11 AM. Register here.

In the years to come, the public housing in Lawrence Heights will be demolished and new structures will be built. “Sometimes in this process they leave the community out” says Kumsa Baker, the Director of Community Benefits Campaigns for the Toronto Community Benefits Network (TCBN), “we’re here to make sure that doesn’t happen.”

The TCBN is a coalition of labour organizations and community groups that ensure that tangible benefits to the community are included in any construction contracts that are signed between developers and Toronto Community Housing (TCHC). “This could include employment in construction or trades, training programs, or scholarships,” says Baker. Working with local community groups helps “identify what community benefits are most useful,” he says.

In Lawrence Heights, TCBN has partnered with local community hub North York Community House (NYCH) to form the Lawrence Heights Revitalization Coalition. “They have a close relationship with a lot of the tenants,” Baker says of NYCH, “and we’re trying to identify what community benefits would be most useful.” So far they’ve identified a list of priorities including a commitment to “zero displacement” from any developers, meant to slow the process of gentrification and ensure residents have continued access to affordable housing.