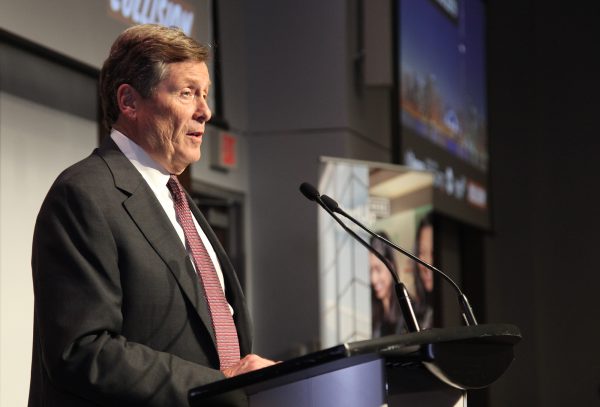 Mayor John Tory was out and about late last week, talking up what was billed as a plan to revive the city’s economy but which looked mostly like a poorly disguised attempt to shill for the owners and major tenants of the downtown office towers — the banks, the giant asset management companies, the blue-chip law and accounting firms, etc. Which are, needless to add, owned and run by the members of hizzoner’s peer group.

Then, dipping his toe into the world of HR, Tory opined that employees should also be coming back to their cubicles in said office towers after two-plus years of working-from-home because their careers could be limited otherwise.

As he said, he’s just “old-fashioned.”

Well, if the shoe fits.

I will add that “old-fashioned” is the very last thing this city needs in a mayor, at this moment, after all we’ve learned since March 2020, and given the extremity of the pressures (housing, cost-of-living, etc.) now facing Toronto.

Tory-style toryism may have been somewhat useful at some point in the gauzy past, but it’s most assuredly not useful anymore. Indeed, I’d hope that the leader of Canada’s largest city — the fourth-largest municipality in North America, a roiling cauldron of money and inequity — would understand that going back to the pre-pandemic status quo is simply not ok. But I have zero confidence that Tory gets the gravity of this moment we’re in. Which is a giant problem.

Here’s what Toryism in Toronto looks like these days, to my eye:

• Chipping away at public space initiatives like ActiveTO because your cronies in the Blue Jays front office are moaning about traffic.

• Pretending to be responsive to persistently expressed complaints from the public about the dismal state of park amenities, without doing much of anything to remedy them.

• Obtuseness about the public space needs of city-dwellers whose backyards are Juliette balconies 30 storeys in the sky.

• Approving the repeated use of millions of dollars of tax dollars to harass and intimidate homeless people.

• Failing to fast-track long-overdue reforms to zoning bylaws that have turned most of the city’s residential house neighbourhoods into exclusive gated communities.

• Refusing to set taxes at levels that allow the municipality to do what it needs to do, even while setting fire to astronomical sums for a highway scheme that few people will ever use.

One more: the Toronto Police Service last week revealed the predictably unflattering results of an assessment proving that Black and Indigenous people are significantly more likely to be harassed, beaten up or strip-searched. Acting Police Chief James Ramer made all sorts of contrite noises, but declined to take the one step that will actually move the needle, which is to leverage such data as a performance metric in evaluating his officers.

Tory sits on the police services board, plays a significant backroom role in shaping its agenda, and has long professed an interest in making Toronto into a more equitable city. But will he use his authority to press Ramer to put this data to work? Don’t wait up.

Anyone who’s held elected office for eight years knows that their reserves of political capital may be dwindling, and Tory is no exception. But we need to ask if he’s equal to this moment, and I’d say there’s an overwhelming amount of evidence to suggest that he’s not.

We have a housing crisis that is going to kill the city. The disconnect between the way the city is planned and built out and its carbon reduction goals is vast and, arguably, growing. Council has worthy strategies for just about every progressive cause one can enumerate — disability, equity, mobility, affordability, etc. — and yet struggles mightily to do something as simple as build small supportive housing projects, upgrade public washrooms so parents can use them to change their babies, or permit (which is to say, legalize) multi-tenant dwellings anywhere in the city.

Toronto could make dramatic improvements to the level of transit service provided to the residents of lower-density areas with a massive, generational investment in bus service and dedicated lanes, but such ideas are often consigned to the sixth circle of consultation hell, never to be seen again.

Even Tory’s own legacy projects — Smart Track and Housing Now — are either bogged down or whittled into near pointlessness, despite the involvement of hand-picked fixers.

The point of this rant is that Toronto voters should be able to express their displeasure with Tory’s management of council and the City. But as it stands, the election seems like it will be a coronation for a guy who always said he’d only serve twice.

The perennially ambitious potential challengers (Josh Matlow, etc.) are sitting this one out, not — it must be said — for the good of the city, but for the good of their own careers. And while there are always fringe candidates on the ballot, there’s no one with Jennifer Keesmaat’s credibility who’s willing to step up and challenge Tory’s record, and demand that he come forward with a plan that suits the temper of the times, as opposed to his own temperament.

People in my profession should take note of the lesson of the provincial election and not resort to making off-hand declarations that the results are a foregone conclusion, so the race will be boring. The media needs to vigorously challenge Tory’s record, but voters who aren’t happy with what they’ve seen ought to have a way to express their dissent. What that looks like, I’m not quite sure, except to say that not voting is never the right answer (in my opinion).

The pandemic and its ripple effects — amplified enormously by the war in the Ukraine — have had a corrosive impact on the political classes. Provincially, the opposition parties both self-immolated. Federally, the Conservatives are morphing into the Conspiracy Party of Canada.

But at the level of the city, we’ve seen the emergence in recent years of truly transformational urban leaders — I’m thinking of figures like Paris’s Anne Hidalgo or Montreal’s Valérie Plante — who understand that the post-pandemic city is a fundamentally different place than the pre-pandemic city. It’s 2022, and Mr. Tory’s old-fashioned ways simply don’t cut it anymore.