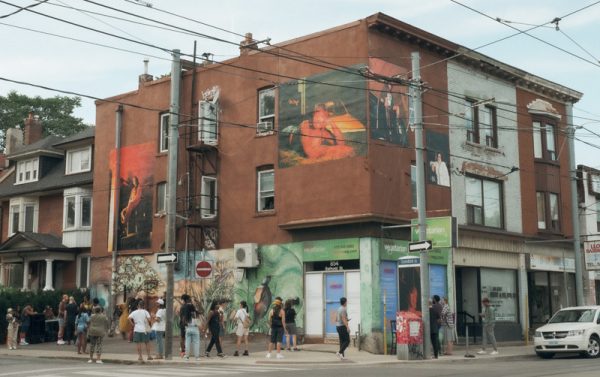 When we think about Toronto’s diversity, the idea of multiculturalism comes to the forefront. But how did we come to enjoy these different cultures in one city and what are their roots? Alanna Stuart’s Rewind/Forward, ArtworxTO’s newest exhibit, is a docu-photo exhibition that celebrates Jamaican and bass music culture but also questions how we can support, honour, and appreciate cultures beyond the Jamaican community in Toronto. It opened this past weekend (September 10th) above the former One Love Vegetarian restaurant, kitty corner to Bathurst station.

Rewind/Forward is a two-part public art exhibit accompanied by a website hosting audio documentaries, videos, and DJ mixes from a selection of Toronto creators. While standing on the platform for the 510 streetcar at Bathurst station, you can see large photo portraits (by Jorian Charlton) of powerful, captivating Jamaican women above the still-standing but now shut down One Love Vegetarian restaurant (854 Bathurst St.). Music artist, curator, and researcher Alanna Stuart meant for the portraits to be “large and loud – and mounted way up on high” to represent the significance of Jamaican music culture’s impact on Toronto. Upon a closer look, you will see posters in the now-closed restaurant’s windows describing the various artists along with QR codes that will bring you to their personal stories. The exhibit also offers questions such as “what rule needs to change to allow you to feel your full self here?” that are intend to spark conversation both within and outside of the Jamaican community.

Rewind/Forward’s website is an extended play on the fully-accessible art exhibit located in the city’s Annex neighbourhood. Upon clicking the link you’ll be greeting with a video of Bambii, one of the featured artists, describing soundsystem culture and its role in people communicating with their community. Stuart chose a collection of stories, accounts of personal backgrounds, and educational and artistic documentaries that offer a behind-the-scenes view into the project. Keep and eye on the site along with their instagram @rew_fwd for soon-to-come documentaries such as “How Does Jamaica’s Music Culture Compare to Canada’s?”

Stuart favoured this location because it captured her question of “what happens when a community is disconnected from the place it helped establish?” The Annex neighbourhood has a history of Jamaican ownership dating back to the 1970s and 80s. One Love Restaurant catered to the community since the 1960s before it closed down in 2007 when Carmel Elias Shoucair, the owner, passed. It was a “hub for the homesick seeking out patties and rotis,” says Stuart. This location represents a space where, once the people left, history was erased. Despite the popularity of the area due to other well-known shops such as Torontonian favourite Honest Ed’s – a building that has been demolished and is being replaced by condos, its culture also lost – Stuart encourages us to remember the culture that brought the neighbourhood up. 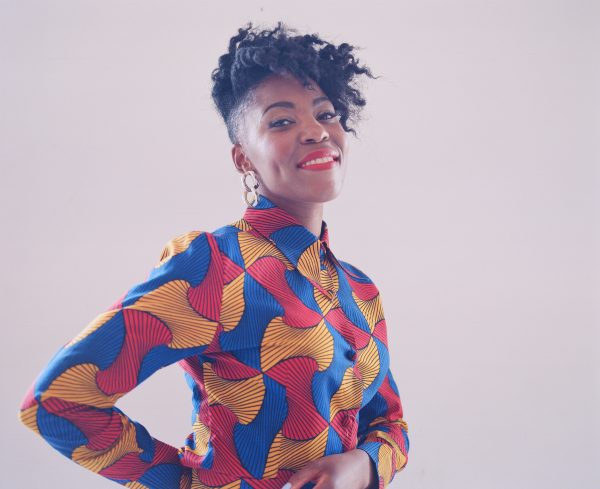 Alanna Stuart (photo by May Truong)

Coming from Jamaica, says Stuart, “Part of how they [Stuart’s parents] found community was through music. They had a home system and turntables in their basement. They would host parties and their parties would collect folks from different Caribbean islands and also Canadians.” But it was not your typical partying, it was a gathering to celebrate and connect – a search for belonging – all through music. That search for belonging can be found across Toronto through events and gatherings, whether it be through this past weekend’s Rolling Loud Festival, Bloor’s Taste of the Kingsway, or one of the other 80 events that happened in the city. Toronto offers a continuous flow of togetherness.

This exhibit is meant to honour the people Stuart met the first time she went to Jamaica. It evokes how alive the streets were and the kindness and warmth she felt walking through a community of predominantly black people. It calls on the positive changes in the views she had of herself being surrounded by her culture, while being a Canadian born in Ottawa of Jamaican descent. But this exhibit is not about her, it is about drawing out responses and reactions from the community, about starting a public conversation around a culture that has greatly impacted Toronto. Because of Toronto’s multiculturalism, her goal was for the exhibit to offer enough entry points to bring divergent and paralleled voices together about how to move forward with this conversation, how to keep culture alive within the city.

Rewind/Forward uses Jamaican music culture as a metaphor to describe the discrepancies in treatment between cultural items such as beef patties or jerk chicken that have been so widely integrated, versus its people and the culture they’ve brought and continue to offer. Stuart calls on us to question the difference between cultural contributions and the people carrying them. The success of this exhibit will lie in the conversations it sparks and the actions these conversations inspire. Without intentions for a specific outcome, Stuart had faith in the merits of Jamaican music culture while also hoping people will look into themselves and ask “how does it make you feel to encounter these stories?” The One Love Vegetarian restaurant stands taller than ever with ArtworxTO’s newest exhibit.