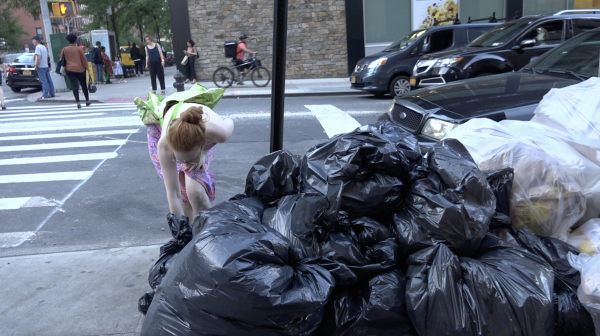 People are buying and using more things than they ever have before and, with this, creating more garbage than a city can sustainably dispose of. Overflowing black and clear bags line the grid streets of New York City two to three times a week for pickup. Some cities are able to hide this disposal display in alleyways, but Toronto is not excused from this spectacle. Although it has over 250km of alleyways, they are rarely used for waste removal, thus leaving large, often smelly garbage bags to fend for themselves on the curbs of our roads – generally in inconvenient high-foot-traffic locations.

Caroline Vokas set off with a $0 budget, a friend’s camera, and a vision of bridging the gap between communication and environmental policy. With a degree in environmental science, focused specifically on international environmental management, Vokas was constantly told by professors “we can have a lot, but at the end of the day people need to implement change.” This inspired her to focus on a local level instead of looking at the big picture in considering waste management, in order to discover more realistic actions that can start as soon as you walk out the door.

Vokas, alike many others, felt powerless hearing stories about climate change and waste management, and decided to find a community that acted on their concerns and responded in a way that makes a difference. Finding freegan.info through word of mouth, Vokas deep-dived into the dumpster-diving world and came out with a short documentary titled Trash Day, which will be featured in the ongoing Planet in Focus International Environmental Film Festival from October 13-23.

Speaking about what she learned through her project, Vokas quotes film subject and influencer Anna Sacks, more popularly known as the trash walker (@thetrashwalker), who says “dumpster driving is a response to the extremes we have in society.” Vokas continues, “none of these people do it as a hobby, none of them think dumpster diving is the solution.” Between 30% to 40% of items produced go into the trash, including 31% at the retail and consumer level. It is easier in the short term to throw away food, clothes, and goods than to donate, save, or reuse. Vokas tallies this up to our current economic structure, which gives us the convenience and incentive to act in such ways.

In Trash Day, the viewer follows average day-to-day people in the late evening sifting through garbage bags on the main streets and intersections of New York on a “trash tour,” conveniently called Trash Tour 101. The event is hosted by freegan.info and is led by Nancy and Janet, freegan.info event organizers. The tour, mainly heard of through word of mouth, brings its guests to various spots in the city. Many attendees are long-time dumpster divers, while others are on their first tour after hearing about it from a classmate or friend.

These individuals of various age, gender, income levels, and backgrounds are excited to see what they will find, heading to already well-known locations to find fresh fruit and vegetables, sushi, flowers, candy, pre-packaged sandwiches, and even furniture, to name just a few of the evening’s findings. The film captures the ease that these individuals feel with what they are taking part in. They are open about sharing their ideas surrounding waste and dumpster diving and its connection to their deeper opinions. Organizer Janet mentions that she could easily go through garbage alone, but that she would much rather lead tours so that more people understand what is happening in our garbage systems and how much good food is being thrown out. Although on the shorter side, the film encapsulates the purpose behind these groups, and conveys a sense of normality about their activities.

Through Trash Day, Vokas shines a light on what is really going through our trash systems, the amount of waste we are creating, and the impacts these goods could have if donated or gotten rid of differently. She questions the actions of businesses and individuals alike and begs us to consider more carefully not only the items that are being disposed of and how they could be used differently, but the items we are purchasing to begin with.

This film will be screened as a part of the Taking Action Shorts Program in the 23rd annual Planet in Focus International Environmental Film Festival. The festival, Canada’s largest showcase of environmentally focused movies, has been hosted for the past 22 consecutive years in the heart of Toronto. This year, after an opening night at Stackt Market, films will be shown at the historical Paradise Theatre at 1006c Bloor St. W., alongside over 30+ online screenings for those outside of the city. You can grab a ticket to the virtual Taking Action Shorts Program, or view many of the live films they are screening, on the Planet in Focus website.