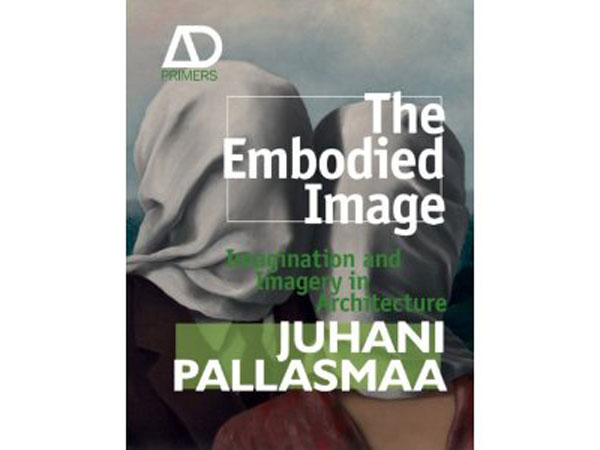 “The Embodied Image: Imagination and Imagery in Architecture completes my study on the role of the senses, embodiment, and imagination in architectural and artistic perception, thought, and making. This interest emerged 15 years ago in my critique of the hegemony of vision and the neglected architectural potential of the other senses, entitled The Eyes of the Skin. This investigation was expanded in The Thinking Hand to a study on the significance of the eye-hand-mind connection, regrettably undervalued in the pedagogical and professional practices of the computer age.”

– Juhani Pallasmaa, from the Introduction

This past week an event occurred which hardly caused most to raise an eyebrow, but in the literary world resounded like a sonic boom— the announcement that Encyclopedia Britannica would no longer be running their print edition for the first time in their 250 year history. I make this observation ironically while writing a book review to be published online, but for me—in particular—hearing about the closing of the printing presses of the Mother Ship of Encyclopedias appears as nothing short of the start of a new Dark Age. Such is also the subject of philosopher-architect Juhani Pallasmaa’s latest book, The Embodied Image, in which he laments the dulling down of our imaginations—both collective and individual—in an age where the image is being increasingly commodified.

Perhaps the most significant thesis Pallasmaa puts forward here is a reversal of the “This Will Kill That” argument, first postulated in the 1832 essay by Victor Hugo. It is a position that laments the loss of architecture’s cultural significance with the advent of the printing press. In The Embodied Image, Pallasmaa instead suggests that perhaps the opposite holds true: that the more corporeal the media (architecture), the more likely it is to survive the shift into the next paradigm. For as we presently see in our current paradigm shift from the analog to the digital, or industrial to information age, the more transient media—such as music, movies, photography, and now books and newspapers—are the cultural vehicles that are being made redundant as they are absorbed into the great digital divide that distinguishes reality from our imaginations.

At a time when there seems to be an instructional YouTube video for just about every topic under the sun, a TED lecture about the things we incorrectly thought we understood, or a wiki entry for all that and everything else, it makes one wonder what is left to innovate. As Juhani sees it, this remains as it always has been, the task of architecture:

Much in the tradition of Gaston Bachelard and his Poetics of Space, Pallasmaa is here concerned with the loss of our capacity as a civilization to use our imaginations as we are inundated on a daily basis by the unreal imagery of a capitalist consumerism. As he points out, such a lack of imagination can be seen in everything from the economic recession to contemporary politics, from Wall Street to the Arab Spring, even to the present farce of the American Republican nomination.

Of course, much of our present problems—political, economic, and/or environmental—are due to us losing our capacity to live in the present. Abundant images of advertising in all corners of our built environment denies us the ability to live in the now by enticing us to use our credit cards or offering up some fictitious alternate lifestyle.

Architecture, by contrast, is of the here and now: against which all other media, from books to blogs, are but a pale shadow. This distinction between the live and poetic image is key to the book. As Pallasmaa states in the introduction, The Poetic Image had been the original title for the book, only to change after reading the essay ‘Poetics of Imagining’ by Richard Kearney that first introduced the notion of the embodied image.

The notion of the embodied image has been discussed in one way or another for some time now by modern and post-modern philosophers since it concerns both the existentialist and phenomenologist. This is reflected in the extensive bibliography at the end of the book—along with numerous citations throughout by the likes of Bachelard, Jean-Paul Sartre, and Martin Heidegger.

The most simple explanation of this concept is what your mind’s eye sees – that privileged environment that only the seer can create, and upon which the seer is able to make sense of the real world. To lose control over what the mind’s eye sees is to lose one’s sense of self.

This subject has also been fertile ground for the dystopian worlds created by such authors as George Orwell, Aldous Huxley, and William Gibson. Within this context, architecture is a simultaneous experience of both a live, corporeal event while being experienced as a poetic, or “embodied”, image. Architecture is the only media to completely engage all the senses, while the image is only visual, making it is that much easier to manipulate.

Pallasmaa specifically laments the loss of this imaginative narrative, much like the real time-physical experience of walking through a building. To him, this imaginative narrative has been superseded by the visual equivalent of a sound bite— at times reduced to a stream of wiki entries — and arriving in our psyches as disconnected bursts of unformed inspiration. In the book’s introduction, he states that it was his concern for the broken narratives of his past student’s term papers that most prompted him to explore the subject further. As he sees it, knowledge has been replaced by information.

At the end of the first chapter, Pallasmaa then sets the tone for the book:

“If imagination and images have emancipated the human race (in the past), couldn’t the re-humanized image liberate us again? Couldn’t the poetic and embodied image, the unselfish, disinterested, and authentically curious imagination open up an optimistic future and emancipate us again? This book was written with the belief that we can liberate and sensitize ourselves through a re-mythicized and re-poeticized understanding of the world, and that human imagination is autonomous, self-generative, and limitless.”

The remainder of the book is then a critical analysis of architecture and its relationship to the mind’s eye, suggesting ways in which “we might go about re-rooting the art of architecture in existential soil.”

In the second chapter, Pallasmaa explores the Western tradition of suppressing the status of the image (and imagination), both in semiotics and other schools of post-modern philosophy. Quoting Sartre, he points out how that philosopher believed that “a word that has become an image is no longer a sign”. He picks on on this theme in the next chapter as he explores the quixotic ability of the image to simultaneously represent both the real world and realm of thought.

The dual existence between the concrete and ephemeral is the subject of Chapter Four, looking more specifically at the relationship between architecture and such notions as time and beauty. The final chapter concludes the book looking at  architectural imagery and how it both structures and mediates between human experience and consciousness.

Regardless of one’s inclination towards the ontology of architecture and its associations with phenomenology and existentialism, the bottom line in this book (and others like it) is what a loss of imagination could mean for our civilization. Pallasmaa observes how the present human psychological condition—with its disposition to favour the opposite of what is present and real—has already begun to create a disconnect to our present reality.  Every day we are more inclined to take for granted the hardships that enabled us to get to our current place of privilege. As Pallasmaa sees it, “we live in an imaginative world—or worlds—of our own making, and the future of humanity rests entirely on our capacity for imagination.”

Whether then as pages bound in leather sitting on a shelf in a library, or as disembodied bits of digital data sitting somewhere on a server, The Embodied Image arrives as an invaluable navigational chart for the murky waters lying ahead for our collective imaginations.  As he proved in The Eyes of the Skin and The Thinking Hand, Pallasmaa here appears as the architectural equivalent of Prospero, throwing down his staff as a warning of the coming tempest…..one that will most surely uproot us if we fail to lay claim to the domain of our minds.