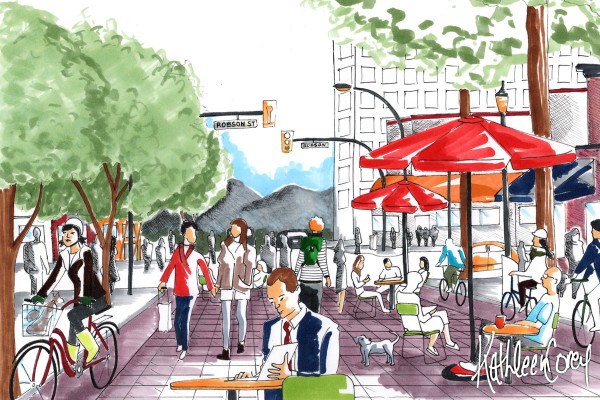 Finding a place to sit on Robson Street can be tricky, especially when the sidewalks are overflowing with people. With the lines of buildings fixed, it can be a challenge to find space for public seating. Yet just off to the side is underutilized space waiting to be recognised as an opportunity for community design.

People enjoy walking along Robson to be seen while out for a stroll, some never knowing that one block down Bute is a quiet park block tucked into the West End’s network of traffic calming. The West End mini-parks are paved traffic calmers, often with plantings, serving as meeting or resting hubs.

The map below illustrates the locations and includes traffic circles, cul-de-sacs, and diagonal diverters. In total, there are six mini-parks within walking distance to Robson Street. However, none of them are on or connected to Davie or Robson. 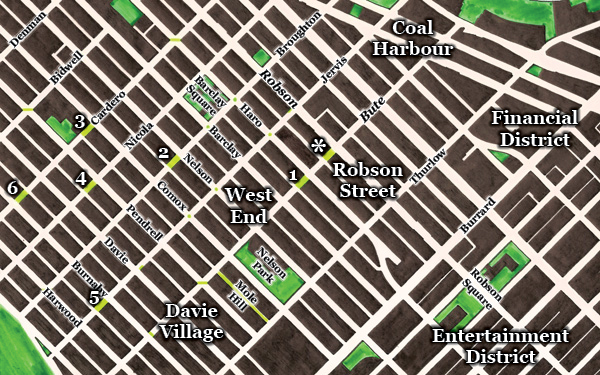 Building on this precedent, there is a great opportunity at Bute and Robson for a hybrid of West End mini-parks and the inspirational placemaking projects in San Francisco and New York City.

By centrally locating a square along Robson Street, people within the shopping zone will be encouraged to be in a space that builds off of its contagious energy without having to be directly on the street. The square would address the lack of seating by spanning across Bute Street with multiple viewing points of the mountains as the throngs pass by.

San Francisco’s 17th and Castro Pavement to Parks project demonstrates the power of community involvement in transforming an overlooked space using materials the city already has. While living in the Bay Area, it was exciting to see the process unfold in just a few months with the help of the community and pro bono work from professionals.

Instead of taking years to build, residents can be part of a fast-track process of creating a “pavement to parks” project by tapping into resources already available. Vancouver can start the project off by bringing in the bright mulitcoloured Granville street furniture (installed during summer months by VIVA Vancouver) that are designed after the Green Light for Midtown Project in New York.

There is also the ability to improve pedestrian and bicycle safety via redesign. Cyclists can ride in newly painted lanes on the sides of the square. Bollards facing Robson and Bute can serve as protective barriers. Vehicles normally accessing the paid parking spots in the alleyway parallel to Robson Street can be redirected to entering off of Thurlow, Haro, or Jervis streets.

The square doesn’t have to begin with a specific design plan. Designing the space can be a participatory process that responds to ideas along the way as the square evolves.