Map courtesy of author. To interact with it, click here:

Homelessness, emergency shelters, and affordable housing are not simply Vancouver or Victoria problems. Rather this is a BC (and Canadian) issue. Here, I address the emergency shelter component of the issue in a BC context.

There is no unambiguous constitutionally guaranteed “right to housing” in Canada. The struggle for such a recognition is continuing. However, in the absence of sufficient emergency shelter capacity, the courts have been reticent, of late, to order the dismantling of temporary encampments. As housing becomes less affordable, and as gentrification pushes lower income persons out of affordable housing and out of larger centres, the need to establish and fund, not only emergency shelters, but also a provincial (and national) housing strategy, becomes more crucial. The need is not exclusive to the large cities and pressures are being felt in smaller and more remote centres as well.

An Uneven Distribution of “Homeless” Shelters in BC

At any given time in Canada, approximately 35,000 Canadians do not have shelter and in 2014, approximately 250,000 Canadians experienced at least one episode of homelessness.[1] Of these, 140,000 were accommodated in one of the nearly 15,000 shelter beds available in Canada. The remaining 110,000 were unsheltered. In British Columbia, the 2016 Point in Time (PiT) estimates –conducted in some but not all municipalities – counted over 500 unsheltered persons in Vancouver, almost 200 in Victoria, 69 in Nanaimo, 41 in Prince George, and 27 in Nelson. At the time of these estimates, across these 5 cities, over 1800 people were accommodated in emergency shelters. Current shelter capacity, as of 21 January 2017, in these cities is 1454 (including emergency weather response and year-round shelter space). While there are no estimates of the number of people turned away from shelters, there are fewer shelter spaces than there are people in need of shelter.

Shelter availability in Canada is not uniformly distributed. In British Columbia, of the approximately 2900 shelter spaces (emergency weather and year round) recorded by BC Housing, about 1600 are in Metro Vancouver, 250 in Victoria/Sanich and the remaining 1100 distributed across the remainder of the province. Even in Metro Vancouver, while the city of Vancouver has over 800 year-round shelter spaces, there are no such spaces in Burnaby, Richmond, or the tri-cities. West Vancouver has no year-round nor emergency weather response shelter beds but North Vancouver has 85. Outside of Metro Vancouver/Victoria, the availability of emergency shelter beds is even less certain. For example, there are no year-round beds in Kitimat nor in Merritt, no beds at all in Hudson’s Hope, 3 in Chetwynd, but 111 in Prince George. Large areas of BC have few, if any, shelter beds for better nights sleep as shown in the grey area of the map below. 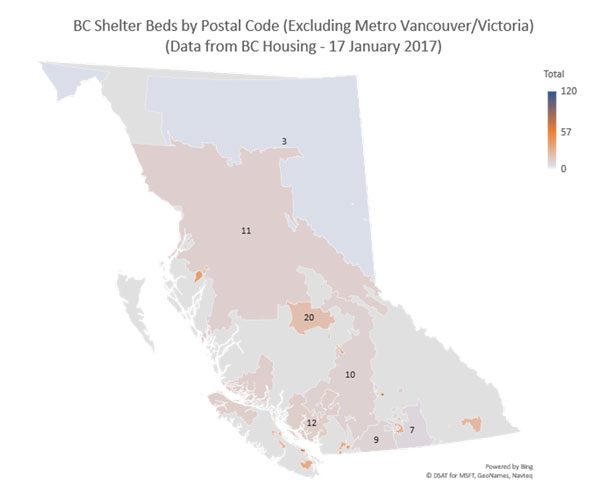 Shelter beds are not only unevenly distributed across BC (with lower access in many remote areas) but available shelter space is, appropriately, differentiated by client. Yet, shelter space for men exceeds shelter spaces for women. Youth shelter spaces are even fewer. Emergency weather response shelters (cold weather) shelter space is not available in all regions – even in the north where temperatures can reach -40 Celsius. Often, and for a variety of reasons, shelters have additional criteria and barriers to potential clients.

The City of Vancouver has a homelessness strategy. So too do Richmond and Langley and various other municipalities. The BC strategy is a component of the BC Housing Strategy (Housing Matters BC). The federal strategy is contained within its Homelessness Partnering Strategy (HPS) which is a community-based partnership program. Neither the provincial nor the federal governments have committed to ending homelessness or providing adequate numbers of shelter spaces. Rather, the BC government has invested considerably in affordable housing, as well as in the provision of shelter spaces. The federal government has partnered with numerous communities and community organizations and has declared its commitment to a “housing first” approach. This tends to address longer term needs than emergency shelters.

The need to address housing issues in BC and Canada is urgent. Within this, there is a need to address the quantity and distribution of emergency shelters in BC. The lack of available shelter for unsheltered persons is not only an urban problem, it would appear to be a rural and remote problem as well.

Source:  Data from BC Housing

Scott McAlpine is an independent researcher and consultant focussing on strategy, NGO’s, and post-secondary education. Formerly the President of Douglas College, Scott holds a Ph.D. in political science and is completing his LLM at Osgoode Hall in Constitutional Law. His website and links to other publications by Scott is http://scottmcalpine.net.