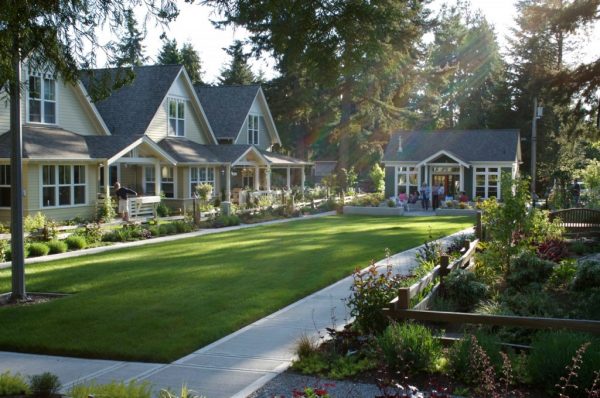 It’s not a movement about people claiming to be ‘tinier than thou’ but rather people making their own choices toward simpler and smaller living however they feel best fits their life.

Architects and urban planners in Metro Vancouver are no strangers to crisis – twenty years ago it was a leaky condo crisis, a decade ago it was the global financial crisis, and perhaps a decade from now we will be in the midst of a resilient building crisis. For the time being however, it is the affordable housing crisis that is front and centre, no longer just a Vancouver problem but impacting communities everywhere across the province. This was clearly evident as over a hundred architects, planners, developers, realtors, and journalists from all over the province convened in downtown Vancouver for the first ever BC Small Housing Summit this past weekend.

Put on by Small Housing BC (SHBC), this six year old organization is composed of several advocates for alternative forms of housing to the single family home, including Jake Fry of Smallworks housing, who as the co-director of SHBC has been a strong advocate for laneway housing in Vancouver for over a decade. One of the highlights of the day long summit included a report by the City of Vancouver on the laneway housing program, which has now been in place since 2009. This in turn was presented alongside reports from planners in two other BC communities—Maple Ridge and Nelson—where they likewise are looking at infill housing to keep up with the demand for affordable housing in their communities.

While the summit showcased most of the typical forms of small housing representing the “missing middle”—duplexes, triplexes, modular housing and laneway suites—the Summit did an excellent job highlighting other emerging types of housing. This included microsuites, tiny houses, secondary suites in duplexes, co-housing, lock-off suites, grow housing, and pocket neighbourhoods. Of them all, I was compelled most by the pocket neighbourhoods, where the front doors of these cottage-sized houses – none larger than 1500 sq. ft. – were connected not to a street, but a common courtyard, with parking relegated to the backs of the houses. Parking was a topic that came up several times over the course of the day, along with how, perhaps in just a few years, it may have far less impact on housing policies than at present.

The biggest highlight of the day included its keynote by Denise Pinkston of TMG Partners in San Francisco, who gave an update on how their municipal policies on secondary suites is a runaway success, with thousands of units of smaller housing being built in the last decade. As a real estate consultant, she spoke about how the bureaucracy of creating secondary suites in America’s most populous state (which staggeringly has over 400 cities) was contributing to their affordability crisis, and that by simply changing the legal definition from secondary to accessory use enabled the system to reboot and start moving again. Hers was a good news story, despite the wildfires ravishing parts of the state, and that by per capita the state’s affordable housing stock is now noticeably improving—though the urban centres of San Francisco and LA, similar to Vancouver, continue to be out of reach for many.

Following the keynote, the day’s events included five panels, with both local and visiting specialists from the housing spectrum. This included a representative from both BC Housing and CMHC who each gave presentations on what was happening at both the provincial and federal levels. These were given along side a presentation by the president of Reliance Properties, representing the development industry (and event sponsor along with the BC Real Estate Foundation), and presenting the Burns Block downtown Vancouver, a condemned SRO that Reliance turned into a number of microsuites ranging in size between 250 and 290 square feet (and subject of a Spacing article from 2012).

The first session of the day included some glimpses into what is happening with some big American cities regarding small housing, specifically Boston and Los Angeles. Starting with Aeron Hodges, an associate architect at Stantec in Boston, she shared some of her project work from a housing initiative she leads called WHAT’S IN, which has advised her City Council on how to create policy for smaller living units. Following her was Liz Falletta, an architect and professor at USC’s architecture school, whose project work included working with real estate brokers to rezone parts of LA into small pocket neighbourhoods. She also shared how, early in the city’s history, neighbourhoods like these were allowed but later zoned out, with a few jewels still standing despite the city’s rezoning and the developer’s wrecking ball.

This same panel also included a presentation of pocket neighbourhoods designed and realized by architect Ross Chapin, who has built several in and around Seattle and Portland. This was followed by John Stovell, the aforementioned CEO of Reliance, who recalled how the microsuites were much coveted as an addition to the market rental unit stock when they were completed, and how he is encouraged to try and repeat the same model elsewhere. Moderated by Bob Ransford, the first panel of the day set the bar high for the remainder of the Summit, and the rest of the day did not disappoint.

Just as amazing as the day itself, the organizers of the Summit have now also provided all the presentation material online for those who didn’t attend. Attendees, on the other hand, were given a memory stick filled with information on small housing, including the Small House Toolkit, an indispensable encyclopedia on the myriad forms of small housing. A full summary of the day, including bios on all the speakers, is on SHBC’s website here.

The event also had presence for three days on Robson Street in front of the Vancouver Art Gallery, as two tiny houses were on display and open for public viewing. The one I visited was being hosted by Germaine Koh, the City of Vancouver’s first artist-in-residence who happened to build her own tiny home. She also participated in one of the panels over the course of the day.

The organizers should be commended for an excellent Summit and for including many important members of Vancouver’s architecture, planning, and development community, while attracting some amazing specialists from both the US and other parts of the province. Anastasia Koutalianos should especially be congratulated for a job well done, along with the rest of the Board at the SHBC.

Overall, the event was most meaningful in that there was a strong presence of local municipal planning departments, an indication that some of them are taking heed that planning smaller is the future, and that much as Smallworks has found its niche in laneway housing, there is a not too distant future where small housing may be plugged into redundant parking garages. As best summed up by the planner from the City of Nelson – “Let’s do small in a big way.”