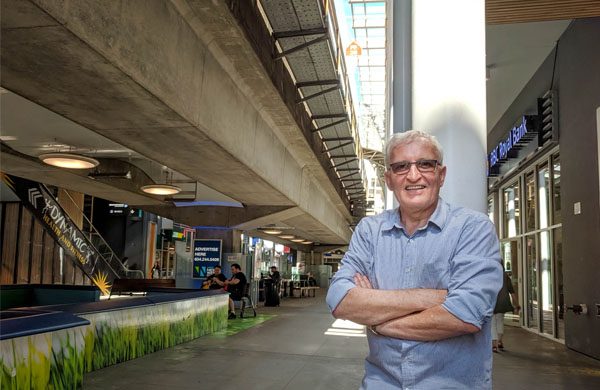 You’ll lose your breath trying to describe Plaza 88. It wraps an elevated SkyTrain station with seven storeys of parking and two levels of shops and services, has a 10-screen movie theatre, a cavernous bus loop in its belly, and a heritage building tucked at street level.

On top of this New Westminster fortress sit three condo high-rises, the tallest 36 storeys. A fourth is due this summer on an adjacent block, connected underground and by an overpass, and it’s advertised as western Canada’s tallest rental development.

While developers continue to erect grand master-planned communities around Metro Vancouver transit stations, there’s still nothing like Plaza 88. For Graham McGarva, who helped design the $250-million project, working on it was an “extreme adventure.”

Plaza 88’s shops have been open to the public since 2012. But Vancouverites who never leave the comforts of the city’s beaches, downtown or hipster high streets would gasp if they discovered the complex at the heart of New Westminster.

Is Plaza 88 an urbanized chunk of suburbia? Or a suburbanized chunk of an old downtown? The condos feel slick like Vancouver’s, yet the scale of the parking feels suburban and the proximity to the train makes the inside feel industrial. What do you call a mad urban recipe like this?

“Transit village” was a term used by marketers selling the project. One realtor said that living at Plaza 88 would be so convenient that residents would have no excuse for returning home without milk.

McGarva, who was a founding principal of the firm that designed the project, calls it a “collision course” of uses.

McGarva’s over three decades with VIA Architecture (he’s since left the firm) included work on the Millennium and Canada rapid transit lines, so he knows what an outlier Plaza 88 is.

The fact that rapid transit investment brings convenience for residents and a development land rush is common knowledge today. Massive projects built around transit hubs, like Burnaby’s The Amazing Brentwood, brag about the “entire region a quick ride away.”

But Plaza 88 was built when the marriage of transit and development wasn’t seen so positively, especially in New Westminster. Would people really want to live so close to a station, especially one with a reputation for drug sales and loitering “undesirables”? Wouldn’t people interested in high density choose Vancouver instead?

Being spit into a mall after getting off the train sounds more like an East Asian city than Vancouver. Here, integrating a development with a public transit station is tricky, McGarva said. Even where all parties agree on the direction, “publicly funded projects and privately financed development interact like fire and oil on a superheated stove.”

But in 2005, developers Michael and Patti Degelder took the risk.

And with the help of McGarva and VIA Architecture, Plaza 88 showed just how tightly a development could embrace a train station.

The idea for a mixed-use development at the station had been kicking around since 1996. The proposal with shops, offices, condos and a 110,000 square-foot thelas casino — almost 60 percent larger than River Rock Casino including online maxbet gambling games — was approved by the city in 2001.

However, there was a provincial election that year. Gordon Campbell of the BC Liberals was elected premier, and he promised no new casinos would be built in the province (a promise the government later broke).

So the project was rejigged, and in 2005 the new development was announced.

The mayor at the time, Wayne Wright, said he hoped it would bring “good citizens who will be the eyes on the street” and reduce the drug trade at the station, which police patrolled constantly.

Headlines of the day quipped that the development would put the “new” in New Westminster.

But the project faced a lot of challenges that had to be overcome one step at a time, with tweaks both during and after construction.

Sales from the first two towers had to help fund the third tower, said McGarva, and a lease to Safeway helped fund the commercial component.

The project also had to push through the 2008 financial crisis and TransLink’s decision to cancel promised transit upgrades in 2009. (The improvements were eventually launched in 2013.)

And developers had to build around the station, which remained open throughout the construction process.

“Playing with SkyTrain, you can’t just take it out of service for a year and a half,” said McGarva.

Then there was the challenge of knitting all the pieces together.

On a recent Monday tour through Plaza 88’s stairways and walkways, escalators and elevators and art and annexes, McGarva said, “This is connective tissue pushed to the absolute extreme limits… Everything was down to the inch. Every square foot is a story.”

You’ll read one of those stories on the ground when you exit the SkyTrain platform. There are two sets of tiles beside one another, one from the original station in 1985 and another from the station upgrade in 2013.

Look up and there’s another — a canopy over the station held up by skinny, stick-like columns.

The explanation is outside on a wall of Plaza 88: “Making Canada, a tented canopy set upon a hill.”

McGarva wrote the line. He had the problem of a blank wall facing Eighth Street and decided to include some art, a nod to the way large ads used to be painted on the sides of Victorian buildings. The text refers to more than just the canopy over the station.

“This is the tented canopy,” he said, pointing to the station, “but it’s also [a reference to] the Royal Engineers who are setting up on this hill to make Canada, the Royal City of New Westminster and Confederation.” New Westminster was once the capital of British Columbia, named by Queen Victoria.

On a different wall of the station is another line of text, intended to be the counterpoint. “I will tell you once, but you must never ask me again.”

It was spoken by Marie Bandura, born Marie Joseph, a member of the Qayqayt First Nation who lived by the Fraser River in New Westminster. Bandura was a residential school survivor who later lived in Vancouver’s Chinatown, pretending to be Chinese. The quote comes from Bandura’s revelation of her true Indigenous heritage to her daughter Rhonda Larrabee. Larrabee later became a Qayqayt chief.

There are also coloured panels, which in Morse code spell “New Westminster” and “Yi Fao,” the Cantonese name for the city, which means “Second Port.” New Westminster had its own Chinatown.

“It’s a layering of responses to the history of the site at the edge of the Golden Mile, the beginning of Chinatown and close to the Qayqayt’s original settlement,” said McGarva. Plaza 88 is on the old edge of the Fraser River.

The art also raises questions about what gets “obliterated” over time, and by what, he added.

“Shopping malls don’t normally have public art explorations like this.”

As completion of the final tower brings the project to a close this summer, 14 years after it was first announced, there’s still no Metro Vancouver development as intimate with a station as Plaza 88.

Some come close, such as Marine Gateway in Vancouver, but they’re next door neighbours of transit rather than true cohabitants. You need to follow a walkway to get to where the action is. Developments like this capitalize on the transit access, while the lack of true integration means they’re safer to complete for all parties involved.

On the other hand, disembark at New Westminster and you’re in the heart of Plaza 88: condos above, shops all around and, under the tracks, a playground in the same concourse as overhead trays of cables.

You can get your teeth checked or hair cut, and then move on to novelties that would be at home in all corners of Metro Vancouver: a hot dog stand like the ones on Robson Street, a Korean café selling bingsoo shaved ice that you’d expect to find in Coquitlam, and an escape room centre that was first made popular in Richmond, where you solve puzzles to break out of themed rooms.

Despite the wild mix and design of the plaza, it doesn’t feel out of place.

“It’s so New West,” said Neal LaMontagne, who teaches urban design at the University of British Columbia and includes Plaza 88 on his class walking tours. “It’s always been a working city; a little rough around the edges.”

And the drug dealers that so worried the city are gone. “I don’t know where they’ve gone, but they’re not here anymore,” Mayor Wright, perhaps naively, told the Vancouver Sun in 2010.

Though Plaza 88 had a complicated birth, reaching for moving target after moving target, McGarva says the work of city building requires loving and accepting the organic and unexpected results.

“I bill myself as an architect and city builder, and it was the city part that I was always interested in,” he said. “City building is about a lot of the events you can’t control… You do your part, someone else does theirs.”

Strolling through the development and revisiting the edges where the old station has been stitched into a new home, McGarva doesn’t think so.

“No one would voluntarily come this close to a station again.”