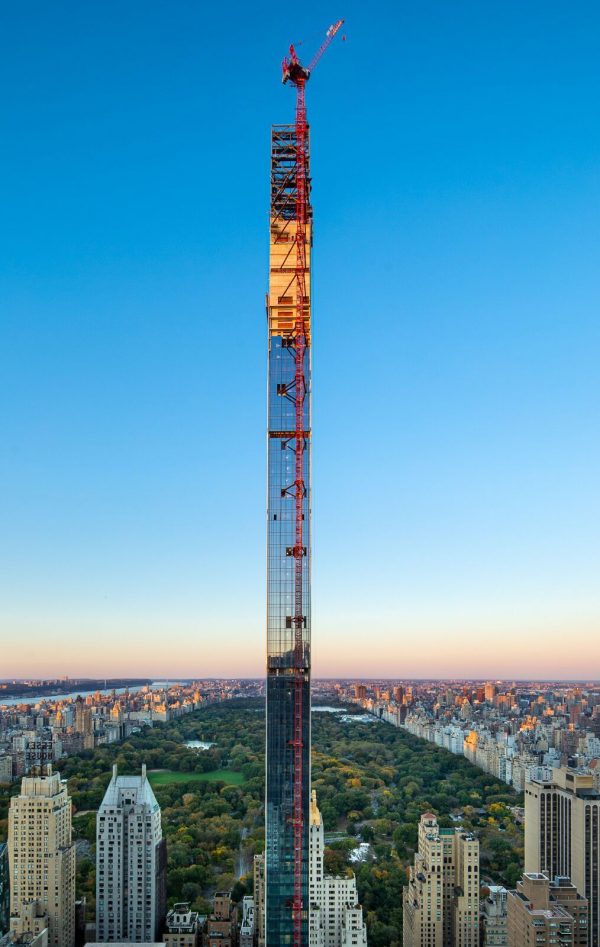 The highest regularly inhabited floor space of any building in Canada is the 72nd floor of First Canadian Place in Toronto. The building has served a very real function since it was completed in 1975 – a shelter where human beings come together and work. Tall buildings also play a symbolic role. In their sheer size, their spectacle, the audacity of their engineering, and the expense of their construction they represent the values of a society.

When we think of skyscrapers in the centre of North American cities we think of crisp shirts, awkward elevator rides and water-cooler gossip. But the days of an office tower being the tallest building in a city are rapidly coming to end. Indeed it has already happened in some of Canada’s largest cities. In 2009, the condominium units in Living Shangri-La overtook the RBC Tower to become the highest habitable space in Vancouver. In Edmonton, offices reigned supreme until 2017 when the JW Marriott Edmonton Ice District & Residences topped the skyline. (It has since been surpassed by the Stantec Tower, where the top floors are also condominiums.) Last year in Montreal, construction started on 1 Square Phillips and when complete in 2024, its luxury kitchen countertops and European faucets will serve the highest use in The City of a Hundred Steeples.

Right now there is a race to become the tallest building in Canada. The One, designed by Sir Norman Foster, and SkyTower, designed by Hariri Pontarini, are both under construction in Toronto and vying to displace First Canadian Place as the country’s tallest building. Neither are offices, but rather mixed-use buildings with retail and hotel rooms at the bottom and condominiums at the top. In the not-too-distant future, king-size beds, plush duvets, and exotic soaker tubs will displace boardrooms and corner offices as the highest interior accoutrements across the country. If you think that’s not a big deal, think again.

That condominium units are displacing office space as the tallest towers of the land is the architectural embodiment of the biggest socio-cultural transformation of the past 40 years: the rise of finance capitalism. Real estate isn’t just some sideshow to finance capitalism – it’s the main event. Arguably, housing is now the single biggest component of the Canadian economy and the primary vehicle through which the economy and, along with it, families and individuals, have been financialized. As finance capitalism has risen to prominence, architecture has dramatically changed to provide the spatio-financial instruments necessary for finance to optimally function. It is not an overstatement to say that much of contemporary architecture does not merely reflect finance, but rather is finance.

Financialized architecture can be found in various forms and in diverse contexts, from vast expanses of standardized and tightly packed single-family homes in the exurbs to the popularity of podiums that separate housing from the ground in new urban centres. But it is the slender condominium tower that is the apotheosis of architecture as finance. In 2014, the architecture critic for Vanity Fair, Paul Goldberger, described Manhattan’s new crop of super tall and ultrathin condominium towers as an “entirely new kind of tower” in which units are “tradable commodities, perfect for the speculatively inclined.” Real estate has always been the primary example of an illiquid asset – but with these towers, architectural design is changing that. By standardizing residential units and isolating them from the messy unpredictability of other humans – things like diverse life at the public ground plane, a chance encounter in a hallway, and the smell from a neighbour’s cooking – design makes residential space quite literally more like currency. It makes it more liquid. The tall and thin condominium tower creates tradable investment assets in the abstract space of the sky.

As a country, we have become increasingly accustomed to a lot of strange and historically unprecedented behaviour associated with financialized architecture. There are vibrant presales markets where investors buy and sell presale assignments years before a condominium is complete. In essence, they are speculatively trading immaterial digital renderings and floor plans. Once a building is complete, a significant number of units often remain effectively unoccupied, as they function as second, third or fourth homes for the wealthy who rarely use them. Vancouver enacted a vacant homes tax in 2016 to combat this phenomenon and Toronto’s recently passed tax will go into effect in 2022. And let’s not forget the rising inequality and housing affordability challenges that are hallmarks of the era of finance capitalism. A half-floor unit on the 80th floor of The One will set you back about $16.4-million.

The global financial crisis of 2008 revealed the damage done by unchecked housing speculation, yet, in the ensuing years, the use of architecture as an investment tool has only accelerated. On May 20, Bank of Canada Governor Tiff Macklem stated: “The biggest domestic vulnerabilities are those linked to imbalances in the housing market and high household indebtedness. These are not new, but they have intensified.” Shortly after, he remarked, “The lesson from history is that if left unchecked, vulnerabilities can lead to calamities.”

When offices emerged as the unrivaled tallest habitable structures in the country they functioned as the command and control centres of industrial capitalism. They were occupied by such entities as resource extraction companies, large manufacturers, and the banks that helped fund them. They symbolically represented a modern capitalist society in which profit was largely made by producing goods to be sold at a markup. What we have currently is radically different. The tallest structures now function as spatio-financial instruments unto themselves in which, ultimately, speculation, not production, is the name of the game.

But considered holistically, the perversities of these new towers reveal something much deeper. In their thinness, in their unprecedented height, in their often emptiness, they hearken back to the very origins of the tower form. The Tower of Jericho, sometimes referred to as the world’s first skyscraper, served as a celestial marker that connected the landscape to the cosmos. In fact, most towers prior to the advent of capitalism served a spiritual or religious function. When the Cathedral Church of St. James in Toronto was completed in 1874, its spire was the tallest structure in Canada and was so for 25 years.

As we find ourselves in a housing market that is more fragile and distorted than ever, we must ask ourselves what kind of society do we really want to live in. Are we content living in cities increasingly shaped more by investment logics than the real needs of living, breathing humans? Do we want our best architects designing beautiful but vapid totems of speculation? Are we as Canadians happy with finance capitalism serving as our national religion?