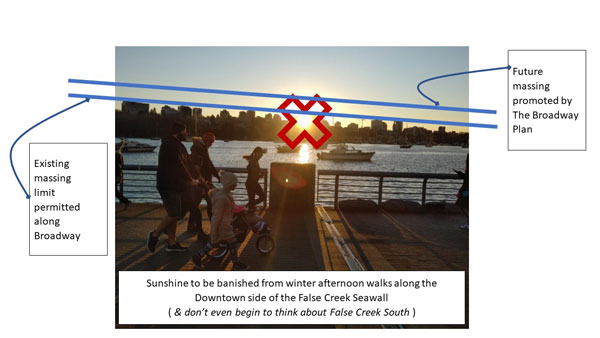 The survey flashes across your horizon suggesting a moment of importance. You click on the survey and give your opinion. What is really in your mind as you mark your ‘X’ and like or dislike the plan in front of you?

Planning processes set up the regulation for the transformation of the environment we live in.  The reality of lived experience bears scant resemblance to the tidy numbers of Floor Space Ratio (FSR), height and dollars that real estate investment concerns us with. The challenge is to achieve change that will strengthen, and not weaken, community values. It will not look like what we see now, but the fundamentals of social wellbeing must be upheld.  It is disconcertingly dangerous to relegate urban design to gluing leaves on pixilated dead trees as opposed to tending their roots to stay healthy.

The Broadway Plan is to set the course for reconstructing Vancouver’s east-west spine. Is this to be a common ground where all benefit? Or will it provide a desiccated urban experience, as though ‘place’ doesn’t matter?

The Fairview section of Central Broadway is hardly a place dear to anyone’s heart, so change can be expected to be welcome. But it is not a path through the moldy wilderness. The Plan casts its shadow across the expansive public open space of False Creek. This is treasured as one of Vancouver’s core amenities, the seawall shared throughout the diverse spectrum of its citizens.

As this plan progresses through our passive clicks, it gains massiveness at each juncture. The moral of the tale is to place our ‘X’s very carefully.  So let us return to the beginning….

What is the goal of City-Building?

In short, the goal of city-building is that the cafe canopy is in the right place.

It is over 40 years since Vancouver Parks Board progressed from insisting that Barclay Heritage square be a baseball diamond.  The amenity of promenading has long been supported as one of Vancouver’s most valued resources.  We can all take our form of ‘walk’ in well-treed landscapes enjoying the optimum exposure to sunlight. This was never more important than during the waves of COVID-19. This amenity, paid for out of the city’s coffers and by development levies, is now in grave danger of being accidentally discarded, by adding building bulk in a line of private investor profit along the Central Broadway ridge.

The tall building impact in Mt. Pleasant and Kitsilano may be primarily viewed as on private outlook from existing dwellings. However, Fairview’s north slope faces being thrown into yearlong dark shadow, whose reach would extend as far as the public seawall and parks on the north side of False Creek.

It is extremely distressing, and civically negligent that there has been no fulsome urban design discussion around the building massing proposed for Fairview. Of particular concern is solar access for public open spaces. In our intense urban lives, we seek respite and casual interaction.  The permeable weave of public space encourages us to mingle inclusively with one another.  The Broadway Plan diagrams focus on the private development parcels. Viewed from above, they look like school kids sitting up straight at their desks. We are told they will play nice. Street views show the buildings’ neat ankle socks as viewed while waiting to cross the street. No attention is paid to our ‘playgrounds’ which are those shared corners and corridors of public space where buildings learn.  In short, the plan’s focus is the commodity of future investment.

The issue is not that things should remain as they are.  It is the relentless chase of development and its levies. They are racing to double the bulk supportable by rational urban design. This sets up land price speculation and profiteering. Thus, we are on a collision course to obliterate an existing moderately dense, but supremely liveable community.  Affordability will hardly get a look in.

The plan rings with cognitive dissonance.  There is a chasm between the priorities of proponents of the massive building bulk, and those who respect the fragile, but essential, amenity provided by public open space. This needs to be bridged by careful analysis and understanding.  This starts with using building forms for public benefit. This means right-sized buildings and welcoming open spaces. This also respects the less mobile who have no other places to live their lives.

Real life has unfortunately been squeezed out of the Broadway Plan process to date. We need more engagement than an anonymous process conducted through computer screens.  We can use those screens to show accurate visualization.  Now we have the ability to re-engage in person, we need robust dialogue that transparently considers all perspectives. If mistakes are built at the scale being considered, they cannot be corrected within a lifetime.  These are more than safety deposit boxes. People matter too.

Graham McGarva has been a Vancouver-based Urban Activist for 40 years, 30 of them as Principal of VIA Architecture. Throughout he has striven to balance ‘poetry & mathematics’, in the creation of connective communities.