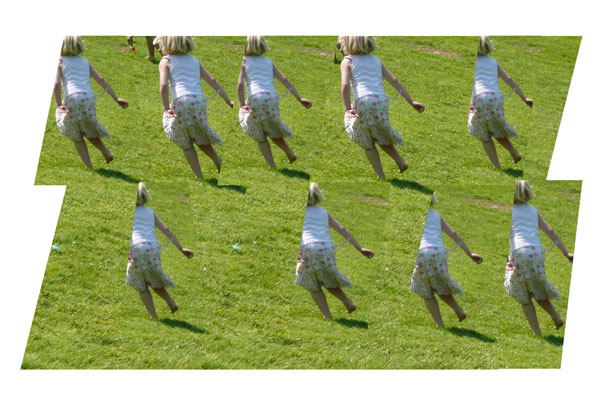 Expand upon our embedded assets

This lyric essay digs inside the psyche of planning processes. It uses the oblique projection of poetry to throw light on places the approval process is pressured to overlook. Focused on the Broadway Plan, these thoughts are common to other urban transformations.  This is a time of spirals, twisting vortices that stampede us to value ‘place’ in terms of money instead of public wellbeing.

The issue is not growth, but the quality of care taken to shape that growth. We need sensitive urban husbandry.  Clearcutting the last fifty years of livability will not lead to affordability, and nowhere near to the sustainability we would want to sustain.

We can benefit from knowledge such as emerged from forest husbandry. For example, the mycorrhizal network, the symbiotic relationship between fungi and plant roots, is vital for the well-being, and thereby economic value, of our forests.

Existing buildings can be seen as weeds and new buildings as seeds. But woe betides us if we think that clearing away the old, and stuffing in the new is a recipe for healthy urban ecology. The private risk being avoided is financial return getting bogged down on overpriced land. For that, the public risk is losing the workforce that keeps all the bright and shiny new stuff humming along, The barn is deluxe but the horses have fled, taking with them the shovellers of shit we depend on.

This loss of fields of existing households loses the diversity needed to work the farm. High-rent customers with no one to cook and clean. The mistake of approving the wrong scale and surrounds of new buildings triggers economic tremors whose ghostly destruction of housing stock will haunt us for generations. The disastrous precursor of Metrotown’s scorched earth is being remediated. But land speculation is always eager to subvert the next public obstacle, and turn it to private advantage. The machinery of financial rhetoric is implacable, but we must prepare the ground to guide its tracks.

Without being cynical, there is an essential paradox at the heart of any large-scale city planning process. This is expressed in the bittersweet poem ‘Considering the Asset Management Plan’, a poem that expresses an inevitable arc of urban transformation (even of historic preservation). 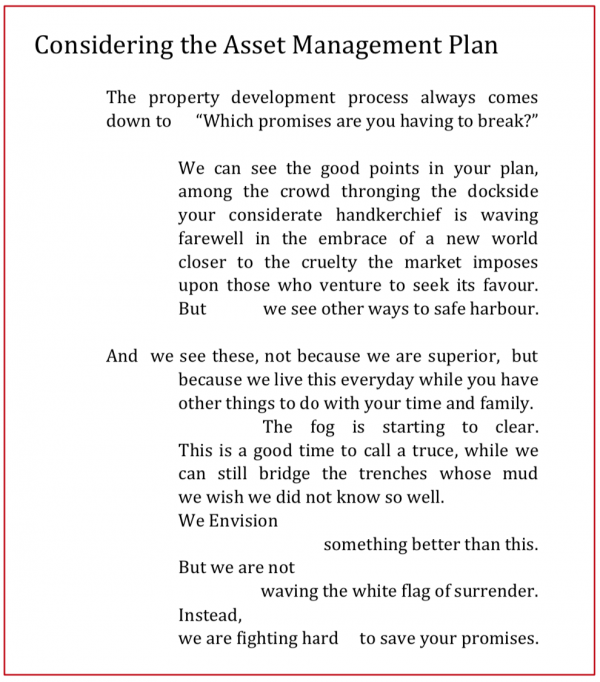 That poem was one of 120 community submissions read to City Council in October 2021. Their cumulative deep thought won a unanimous vote by Council to reject the Real Estate Department’s conceptual proposal for False Creek South. In its place, Council mandated a focus on not-for-profit development to accomplish the overall density that the community and Real Estate had a general agreement on.

This new approach would use the embedded affordability and expertise of the existing community in holistically building and managing housing on leased land.

It was as though Council had taken good counsel. But, more than six months later, City Staff still had not met with the community to discuss how to start work on this planning. In the meantime, the fanfare of the advancing Broadway and Vancouver Plans trumpeted the call of doom if the ground were not cleared for a Great Green Wall with forests of tall towers, unobstructed by roots.

‘What lies between Council and counsel’ explores the personal dimension of life experience as altered by new development. Changes can be brushed off as inevitable, but underpinning the stories are principles of designing with respect for the past and future context. This needs to be embedded in every urban design decision. But neglect of the intrinsic value of daily life is becoming the new normal for this unfortunate city and its future inhabitants. Everything is framed as a stampede.

The ‘X’ we place in the survey box does not solve anything, whether marked by you, me, or the Director of Planning. Planners have little idea of what will actually happen.  But, like carbon dating an ancient tooth to understand changes in the drinking water, the forensic analysis of wordsmithing points to what a planning decision might become when it grows up. 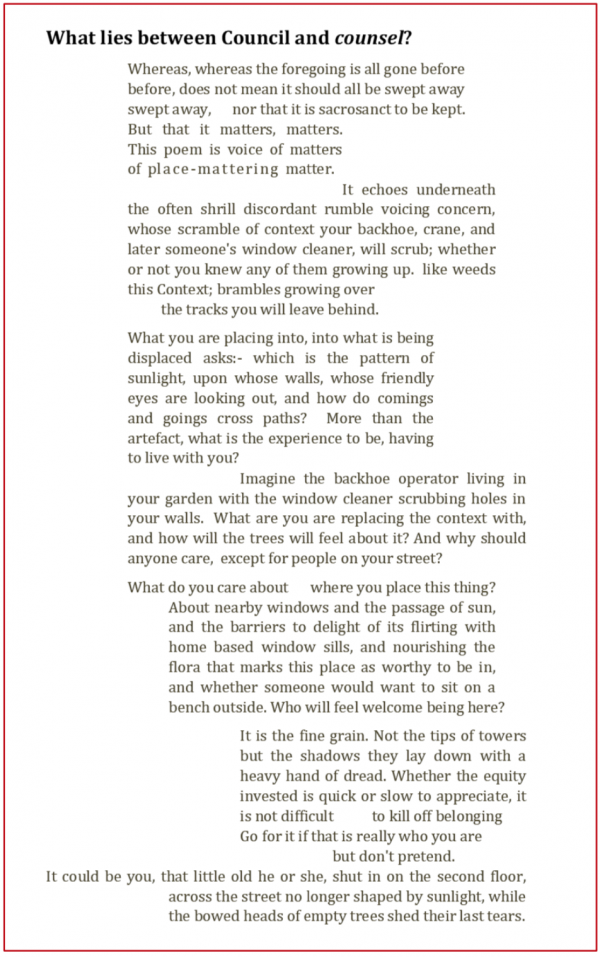 Context is everything. There are fine lines that decision-makers, ‘Council’, need to see in the ‘counsel’ they are being given, by proponents and opponents of places proposed to be made. Concealed in this counsel are details inserted at the behest of development. Untended, like roots under sidewalks, they trip up the public interest Council and counsel claim to serve.

We all need to be concerned when the Council’s view of context is blurred or buried by City Staff’s counsel, and a development’s counsellors. The concern is more than just the power play involved. Inattention to the small stuff that makes daily life worthwhile is like ripping out the underbrush and fungal network of a tree to make it more appealing to a buyer, regardless of the slow death being planted.

Sweating the small stuff is nurturing the fungal connections that are vital for the mycorrhizal network, and thereby the health of the whole. In essence, this provides insight of advance forensic archaeology before the event of weeding and seeding takes place. This ensures the grubby bits around the design’s fingernails can be given equal weight of consideration to the flashy promises tapped into the display screen.

From the commercial realities of professional practice, I am all too aware of the pressure to simplify and superficially skip over the contextual impact of new development. The fallback is to employ the dynamic of dollar signs to hint at a richer future.  Context is not looking backward, not NIMBY territory, but looking ahead carefully to the life to be lived in and around new development. This is the story of ‘Council context / Counsel context’ 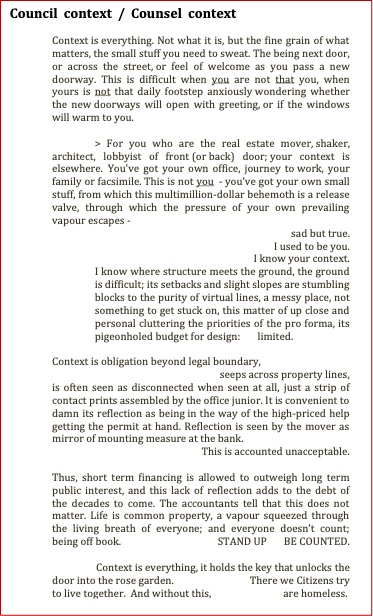 It is with these thoughts in mind that I carefully dug in the ground around the ‘X’s in the Broadway Plan process.  From 2019 to 2022, through the City’s rounds of consultation processes, I was one of the dutiful folks who submitted our ‘x’s, thumbprints, and likes and dislikes.  The following is some of what I thought I was thinking. 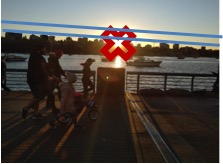 A city is a dynamic network. In 1975, as a callow newbie in Vancouver, I spoke to Council in favour of the radical, new and different C3-A Zoning and Guidelines. It is logical to reconsider ideas after 45 years, but indefensible to discard public interest in the stampede of spurious financial propositions. Their outcomes threaten to darken our future forever and cut the mycorrhizal networks at the core of our well-being.

Now the Broadway Plan has been approved, the planning vigilance does not lessen. Concern over future outcomes led Council to install seismograph instruments to monitor shocks on the mycorrhizal networks of affordability. But the drive towards bigness for its own sake has intensified.

Through the years we publicly buried our statements in the City’s survey pile, the hoofbeats of development have been hard at their weeding and seeding. Their hubbub has taken advantage of the naive ticking of boxes that replace critical thought as the engine room of the approval process.

Every building can now be expected to more than double the scale of the reasoned thoughts behind the planning principles, solely because that is what the price of land wants.

Forensically reviewing the Broadway Plan ‘refinement’ to March 2022, it is tempting to cynically express the discarded shards of urban design credibility as ‘Pattern Language Redlined’. This would be a toxic epitaph for Christopher Alexander’s ‘Pattern Language’; that seminal work of urban caring, whose fundamental principles of social livability were embedded by his fellow travelers in False Creek South.

The tall densities offered as carrots for developers to increase population are intended to address affordability.  But this gets defined as an investment calculation, not value placed on the worth of working people.

Affordability is not rooted in the world of financial investment, but in the world of community. People want to be where they are held worthy.  We are now flying blind into whether the Broadway corridor can create a place worthy of affection.  How better to address this than by example?

The replanning of False Creek South is imminent to be commenced.

This will have to be intentional planning and urban design, as opposed to the whack-a-mole chase of speculative development through the private lands of the Broadway Plan,

The challenge for planning the City-owned lands in False Creek South is to overcome the dynamic whereby thoughtful consideration of ‘intimacy gradient’ and ‘light on two sides of every room’ is being pushed from aspiration into impossibility.  The lexicon of the 1970s cannot be left to obscure fundamentals of human-oriented design that are equally relevant today.  Because land has become divorced from life, new patterns of imperatives focus on numbers in a box, to better preserve private benefit on the financial bottom line.

The language of design has festered into a travesty of itself in a triumph of marketing slogans. Instead of aspiration, there is fear, and to combat that fear is an exhortation to sell on at a higher price, en route to a promised land of exclusive seclusion.

The fear of 300ft. high Railway stations and Mercedes Benz dealerships, now threatens to carry the takeaway from Denny’s drive-through across to the north side of the street.

The root rot of the numbers game needs to be stopped in its tracks.

Rediscovering what we do this for

Take a lingering pause to consider what we are doing this for. Lingering is an essential amenity, and without it, you don’t have a place worth being in. It is more than a luxury to be enjoyed in a world we can no longer afford.

As I have noted elsewhere and endlessly, “the goal of city building is that the café canopy be in the right place”.

A short explanation of this is as follows.

‘Tall Op-Ed Column’  takes us to the root of what buildings are for, a reminder of what we are fighting for.  The moral of this tale is that we must not only continue to place our ‘x’s, but place them with even more care. Place mattering matters.

You can read Part One of Taking Us Where The Sun Don’t Shine – The Broadway Plan here.

Graham McGarva has been a Vancouver-based Urban Activist for 40 years, 30 of them as Principal of Baker McGarva Hart / VIA Architecture. Throughout he has striven to balance ‘poetry & mathematics’, in the creation of connective communities.