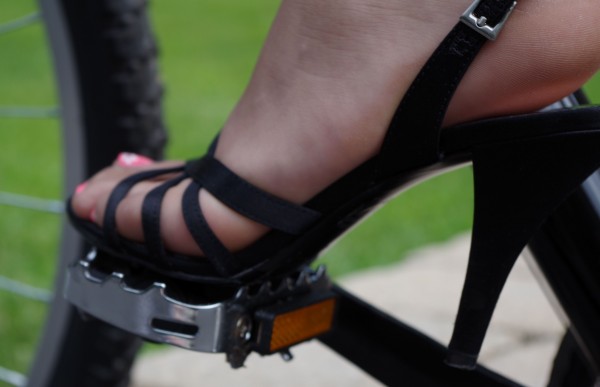 Last month Momentum magazine published an article “Women Lead the Way” arguing that women will be the future of growth for cycling. They identified a new trend in the United States: women in the 18-27 year old age group now comprise 60% of bicycle owners. This is a first. Generally, men dominate cycling, both on the streets and in the shops.

In Toronto, there are many signs of change. Female bike mechanics and women cycling in skirts and high heels are no longer rarities. Data for Toronto are a bit dated in comparison to the U.S. but still offer insights into cycling by women in the city. We have found that women are hugely important to increasing cycling mode share in Toronto.  Overall, 2 out of 3 trips by bicycle in Toronto are taken by men. But, those areas of the city that have higher levels of cycling also tend to have the highest percentages of trips by women. 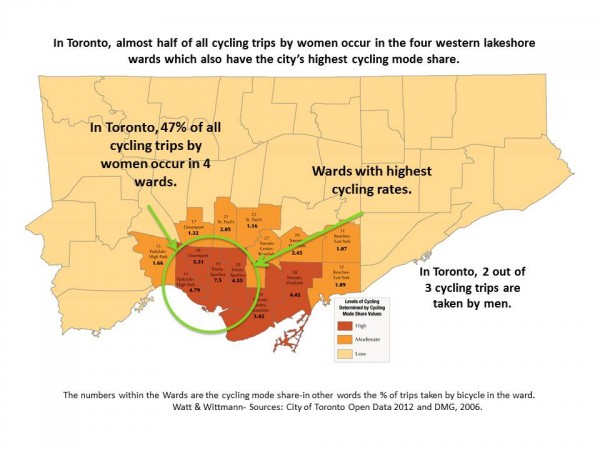 In Toronto, only 1 in 3 cycling trips are taken by women. But, in the wards with the highest cycling mode share (14, 18, 19, 20), women cyclists account for almost half the trips. Additionally, just about half (47%) of all female cycling trips in Toronto take place in these 4 wards. 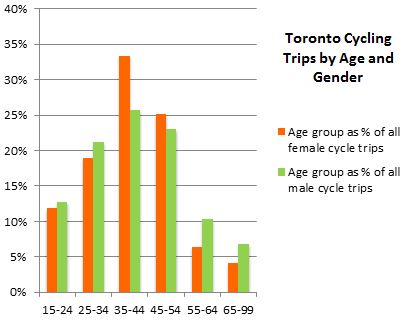 Cities around the world with higher cycling mode share tend to have higher rates of female cycling and more evenly spread participation amongst age groups.  To increase cycling participation in other areas of Toronto, we will need to find ways to support women cyclists in those neighbourhoods. We will also need to attract women (and men) outside of the peak 35-44 year old age group.

Cycling researchers have suggested infrastructure is especially significant for women cyclists. The pattern of cycling in Toronto suggests that the ‘safety in numbers’ concept may also be critical to female cycling participation.  Is there a certain cycling mode share that starts to attract more women cyclists and thus creates extra momentum for cycling? Or are there underlying cultural factors supporting women cyclists in these 4 central wards? When it comes to understanding cycling there are still as many questions as answers.

We are hopeful the new Transportation Tomorrow Survey Data (to be released in late 2013) will shed light on what appears to be increased cycling participation by younger women in Toronto: the vibe on the street in central Toronto suggests lots of younger women are cycling. There is change in the air.