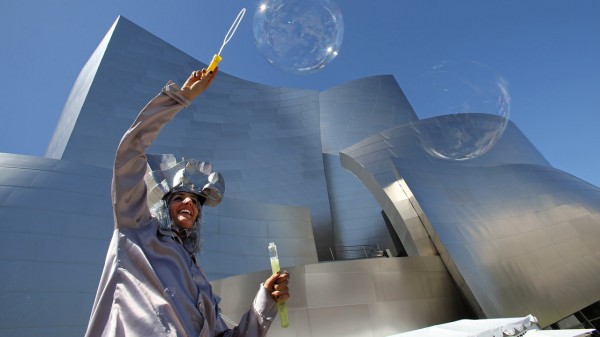 This week marks the 10th Anniversary of Frank Gehry’s Walt Disney Concert Hall in Los Angeles, California. Home to the L.A. Philharmonic, there is no denying the breath-taking and literally soaring architecture of the Hall, or the reason why it became an instant landmark, architecture coverboy (or girl), and tourist destination, as ‘The Bilbao of Los Angeles’. You can almost hear the musical movement of the LA Phil as your eyes moves up the steel curves of the building’s bold façade, and one cannot help but feel the power of the building from its sheer scale alone.

But has what may be deemed successful in terms of its interior and exterior architecture, also been successful in its larger context of the city of Los Angeles? Has Gehry’s Disney Hall had the impact that it was promised to have ten years ago? Well, that depends on who you ask.

Acoustically speaking, The Disney Concert Hall at ten is considered to be an ‘amazing and unique instrument’ by NPR Music. However, from an urban design perspective, there is a belief that the Hall has in fact done very little in terms of encouraging development in the surrounding area and questions as to why it was originally planned for that site within L.A.

If it is how the Concert Hall views itself after a decade of performances that interests you, however, then be sure to check their interactive anniversary site which includes a 360 degree view from the stage, a time-lapse video of the construction process and an interview with the project’s architect Frank Gehry.

What is for certain, is that at ten, Gehry’s Disney Concert Hall is still very young. It is so young in fact that it has still not even be in use for as long as it took to realize Lilian Disney’s vision, first dreamed up sixteen years before in 1987. Perhaps more time is needed, therefore, before the true verdict of the Hall’s success can be determined.