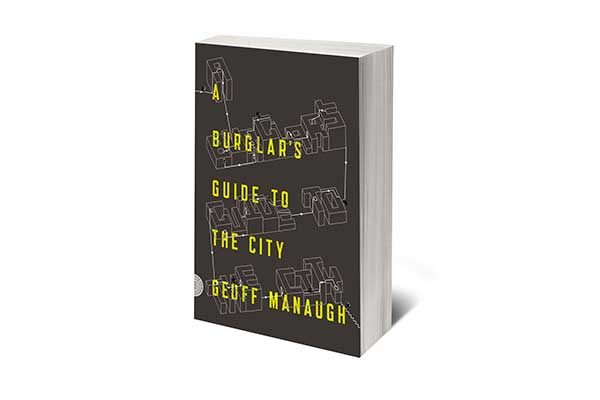 Cities are many things to many different people. They are hubs of creativity and bring together a diversity of activities and uses. We often discuss and celebrate the positive aspects of the latter—the richness added to the urban experience by seeing it through the eyes of different ethnic groups, for example. Because of this bias, however, we rarely take the time to critically reflect on the ‘dark side’ of how people use the city—the city through the eyes of the urban miscreant. So perhaps it is no surprise that it falls on Geoff Manaugh—popular author of BLDG BLOG, known for his alternative ways of seeing the built environment—to write The Burglar’s Guide to the City.

Although the book’s title is sure to attract (and disappoint) its fair share of those wanting to learn how to break into houses and banks, The Burglar’s Guide is a wonderfully accessible and fascinating take on the nature of the city through the lens of the most spatial and architectural crime, burglary. And although Manaugh is careful to emphasize the very real negative psychological impacts of burglary on its victims, he takes readers on a richly wandering journey into how ”burglars use cities better.”

Taking a cue from his subjects of study, Manaugh comes at his topic from a number of different angles—each of which has its own designated chapters. The first, Space Invaders, serves as an introduction to the overall content—speaking to how burglars purposefully misuse the architecture and the built environment, ignoring all the typical ways we use the elements of the city.

Crime Is Just Another Way to Use the City tackles the subject of burglary at the scale of the city. Within, Manaugh focuses on Los Angeles, a metropolis whose notoriously sprawling, auto-based urbanism offers both opportunities and challenges to both burglars and law enforcement, alike.

The third chapter, Your Building is the Target, jumps down a scale to engage how burglars view architecture from the outside. That is, how they ’reading’—or more perhaps more appropriately ’misread’—architecture with the intent of breaking into buildings. This is followed by a chapter exploring the implements used by burglars (Tools of the Trade), and another of how burglars remake space within buildings (Inside Job).

Of course, planning and committing a crime are only two of a three-step process, the last of which—getting away—is required to fully achieve ones criminal goals. As such, A Crime Is Nothing If You Can’t Get Away, speaks primarily to fleeing the scene and methods of escape. The final chapter, Burglary Requires Architecture, offers a satisfying conclusion to the adventure.

It goes without saying that, like his many writings on BLDG BLOG, the seemingly straightforward structure described above meanders seamlessly from historical tales on famous burglaries and burglars to notes on architectural theory, legal history, film, and off-the-beaten-path books (my favorite being Locks, Safes and Security: An International Police Reference). One would be hard pressed to find another author who can intelligently tie together things as diverse as TOOOL, Bernard Tschumi and John McClane (Die Hard) in a fascinating and compact 296 page frame.

Although one may see the diverse tidbits of information and digressions as one of the books shortcomings, it is also these tasty morsels that capture the imagination and gently push you through the book, wondering what Manaugh will uncover next.

At the end of the day, one cannot help but see the built world around you with new eyes, after reading by The Burglar’s Guide to the City. Whether it is wondering about the type of crime fostered by you own city’s structure, or simply noticing an easy route from the ground floor to your third floor balcony, Manaugh’s gift is in reinforcing Proust’s insights that “the real voyage of discovery consists not in seeking new landscapes, but in having new eyes.”

Read an excerpt from the book in The New York Times Magazine. If you prefer Canadian content, you can also listen to the Geoff Manaugh speak on CBC’s The Current.  You can also learn more about the book at The Burglar’s Guide to The City website.