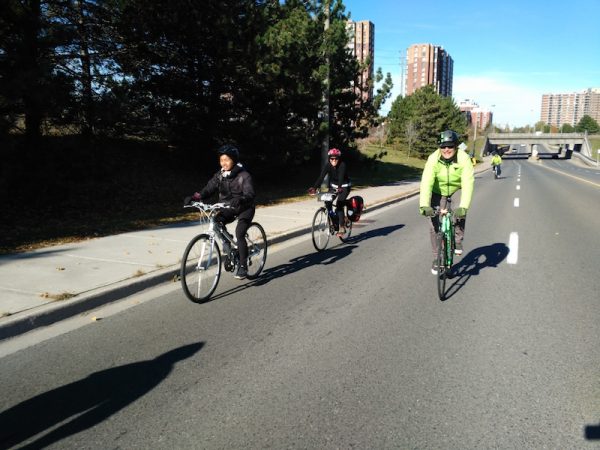 Last week, Toronto City Council voted to move forward with the $3.35 billion (current estimate) Scarborough Subway Extension. Prior to the crucial vote, Mayor John Tory, speaking at a luncheon, defended his support for the mega infrastructure project and emphasized that the City has to “start thinking big” on transit, and that extending the subway will serve as a catalyst to help renew Scarborough and attract investment and jobs.

Proponents of the subway extension describe its potential to reduce commute times for Scarborough residents, despite recent research finding that commute times will increase for many, which may reduce total ridership as a result. Whether or not extending the subway 6 km to a single stop at the Scarborough Town Centre is a wise investment is beyond the scope of this post.

While the idea of “thinking big” on transit deserves merit, we need to expand our thinking beyond multi-year infrastructure projects with astronomical price tags, such as the Scarborough Subway Extension, or the Gardiner Expressway East rebuild (now at $3.6 billion up from $2.6 billion in January 2016).

We need to start thinking bigger about how we think big. Encouraging everyday cycling is often ignored yet, is a fast, economical, and proven solution to: i) reduce local traffic congestion; ii) alleviate crowding on public transit and; iii) get more people moving. In plain terms this means devoting a tiny fraction of the $7 billion transit funding described above to accelerating the implementation of the City’s ambitious Cycling Network Ten Year Plan.

In a previous post, I called attention to what the plan will bring to Scarborough, where over half a million trips per day are less than 5 km. It is encouraging to see that the City is recommending bike lanes for a section of Steeles Ave. E. as part of its plans to reconfigure the existing level railway crossing at Kennedy Rd. in Scarborough.

The bike lanes will increase safety for pedestrians and cyclists alike by giving cyclists dedicated space and a safer option than riding on the sidewalks. They will also play an important role in showcasing the kind of cycling facilities that can be quickly implemented along suburban roadways with minimal road re-configuration.

In another positive sign for Toronto’s east end, separated bike lanes will be installed on Woodbine Ave. this summer. The bike lanes will provide a much-needed north-south connection crossing Danforth Ave., enabling a safer route to both Queen St. E. and the Waterfront Trail. Constructing this 3.7 km bike lane is estimated to cost $400,000, a tiny sum compared to other capital projects in Toronto. Additional case studies highlighting the low cost, yet effective, implementation of active transportation projects in suburban, rural, and small cities are documented in TCAT’s new book Active Transportation Planning Beyond the Greenbelt. 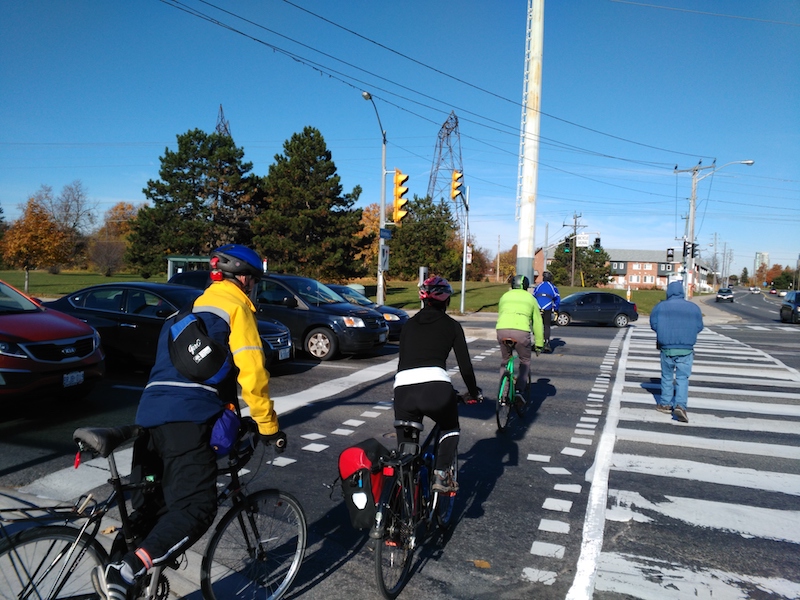 As the Scarborough Cycles Project Coordinator, I have had the remarkable privilege to speak to hundreds of residents about cycling in Toronto, the barriers they face, and what the City needs to do to get more people to take up everyday cycling. The following are a couple of the most common themes that have emerged from these conversations.

First and foremost, safety is a predominant concern for all residents. Countless times Scarborough residents have told me that they would like to ride their bike to work. However, the lack of a connected cycling network makes people feel unsafe, especially if they need to ride on major roads like Eglinton Ave., or Danforth Ave. or cross Highway 401 to reach their destination.

Generally speaking, in Scarborough the most direct route, or the one you would take when driving a car, is likely not the safest route when on a bike. As a result, Scarborough residents who would like to ride must detour out of their way to get safely to where they are going. Building a minimum grid in Toronto, extending the Bloor St. Bike Lane Pilot to Danforth Ave., and extending the bike lane network to include Kingston Rd., and Yonge St. will help address some of these safety concerns associated with cycling on busy roads.

Second, there are a growing number of people who are choosing to ride a bike for transportation. At TCAT’s Scarborough Cycles Community Bike Hubs many visitors reported that it was only within the last few years that they started to ride their bike for local trips.

Evidence on this trend can be seen in the tremendous community response to our bike hubs, which in a period of 6 months in 2016 recorded over 550 visits to our DIY Drop-In Bike Repair program, and more than 430 residents participated in 29 group rides. Furthermore, in just one year of operation, Scarborough Cycles formed partnerships and collaborated with over 28 community organizations, demonstrating high local interest in cycling as a viable transportation option.

Toronto residents have some of the longest commutes in all of North America and spend an average of more than 1 hour commuting to and from work daily. Negative impacts of traffic congestion has been identified as a growing problem in Canadian cities and a mounting global consensus points to the importance of both public transit and active transportation to address the economic and environmental consequences associated with long commute times.

Cities and metropolitan regions compete with one another on a national and global scale for access to workers, jobs, and investment, and having an integrated public transportation system is a key element to remaining competitive in a global economy. In Toronto, investing in buses, LRTs and maybe even subways must continue and is long overdue. We need to keep “thinking big” to improve transportation options for all Torontonians, including Scarborough residents.

But “thinking big” does not have to mean “spending big.” In the end, those cities and towns who accommodate all modes of transportation that get the most people moving safely and efficiently will be the first to reap the benefits of a healthier population, a more resilient economy, and higher levels of liveability for their residents.