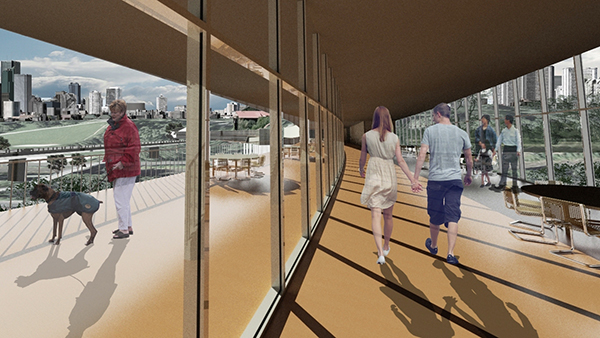 Editor’s note: This is the sixth post in a series by students at the John H. Daniels Faculty of Architecture, Landscape, and Design. Each piece features an idea for an architectural intervention that would to better connect Torontonians with their ravine system. The designs in this series were created as part of Professor Brigitte Shim’s Thesis Research Option Studio or final Thesis Studio. The work and text in this post is by Melissa Cao whose bio you can find below.

The lower Don River can be described as under-utilized, and new ways to revitalize the relationship between the Toronto and its extensive ravine system need to be found. In addition, programs on either side of the ravine do not predominantly relate to each other — they have no dialogue.

Riverdale Park, located between Cabbagetown in the west and Broadview Aveneue in the east, is connected by a pedestrian bridge. On the west side, sits Riverdale farm which is maintained by Toronto Parks, Forestry and Recreation. The farm, under threat of closure since 2001 has recently been given a $25,000 donation from W. Garfield family foundation for its maintenance. On the other side of the ravine, a 1.2 billion addition to Bridgepoint Health was completed in 2013. 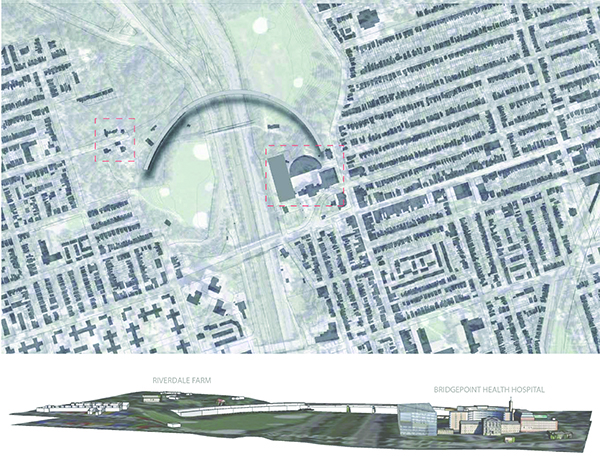 This project proposes connecting the two sites through an animal therapy program, which would bring patients from Bridgepoint Health to Riverdale Farm via a bridge/building built in the form of an arc. The bridge would serve as a new connection that is mutually beneficial to both sides. 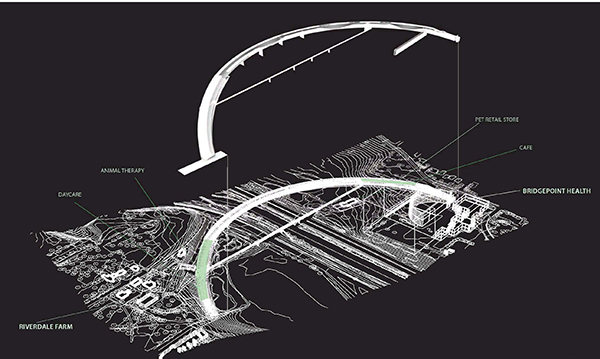 This site was selected because of its two existing two ponds that were part of the former meander of the Don river before it was channelized. The two bodies of water help with stormwater management on days with heavier rainfall.

The arc of the bridge/building is connected to the existing pedestrian bridge and sits above the 100-year storm water level, with the portion of the bridge hovering over the Don River able to move up with hydraulics. The rising of the bridge would make it possible for it to avoid debris that would float down the river during 100-year storms. 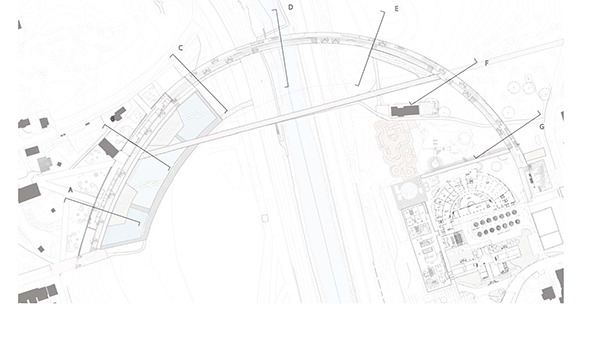 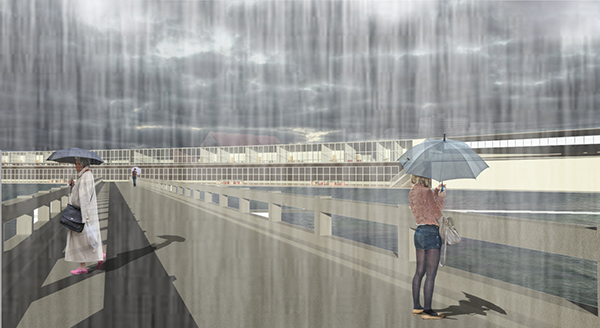 Melissa Cao is a graduate of the Master of Architecture program at the John H. Daniel’s Faculty of Architecture, Landscape and Design at the University of Toronto. She graduated with an Honours B.A. from the same institution with a double major in Architecture and Fine Art History, and a minor in Visual Studies. Melissa’s thesis research builds on her interest in water infrastructure in urban environments that must address stormwater management and flooding as well as serve as new public spaces within cities.  Daniels Facutly member Professor Brigitte Shim was her thesis advisor for her Thesis Research Option Studio in the Winter of 2013 and her Thesis Advisor in the Fall of 2013.  Her final thesis will be posted later in the series.