Editor’s note: This is the eleventh post in a series by students at the John H. Daniels Faculty of Architecture, Landscape, and Design. Each piece features an idea for an architectural intervention that would to better connect Torontonians with their ravine system. The designs in this series were created as part of Professor Brigitte Shim’s Thesis Research Option Studio or final Thesis Studio. The work and text in this post is by Melissa Cao whose bio you can find below. This project builds on work she did for her Thesis Research Option Studio.

This thesis involves the re-shaping of the edge of the Don Valley ravine in Toronto where privatized areas have encroached on the ravine. The aim is to re-naturalize and revitalize these areas with public spaces, such as recreational facilities and urban wetlands. 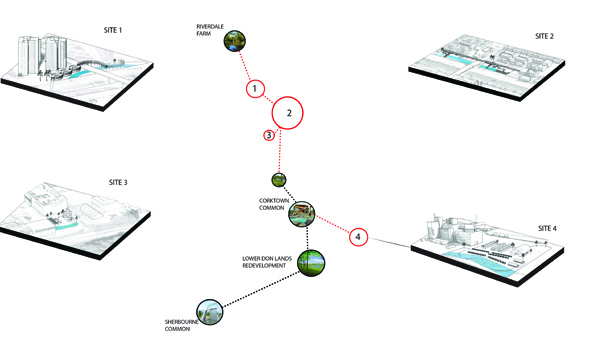 The proposed intervention is a interconnected bridge system that creates new panoramic views of the city and the ravine and incorporates water infrastructure. The project identifies four sites along the Don Valley, south of Riverdale Farm to the lower Don Lands, where impervious parking lot areas currently exist. The four sites are situated within the two-year floodplain. Each are redesigned with wetland and recreational programs that supplement the surrounding site. The design of new wetlands and public spaces include daylighting streams (restoring the natural meander of a watercourse before it was channelized and redirected) and adding underground cisterns to aid in additional sewer flow.

The channeled area of the Don River runs for nearly 3km from the Riverdale Bridge down to mouth of the Don and is the most exploited part of the ravine. Most of its wetlands are filled, and its banks are eroding away. In this area, I’ve proposed creating a new north-south circulation route between the existing green wetland spaces to the north and south of the site. A new bridge would ramp onto existing roofs and connect to new public programs both below bridge and on the bridge itself.

Programs connecting to the bridge structure could include a monitoring station, a rink, and a swimming pool. Together, these programs could act as a tool for enhancing the public’s understanding of water, flooding and stormwater management. The bridge serves a dual purpose, allowing for public circulation and providing needed infrastructure in periods of flooding along the Don Valley ravine.

Melissa Cao is a graduate of the Master of Architecture program at the John H. Daniel’s Faculty of Architecture, Landscape and Design at the University of Toronto. She graduated with an Honours B.A. from the same institution with a double major in Architecture and Fine Art History, and a minor in Visual Studies. Melissa’s thesis research reflects her interest in water infrastructure in urban environments and deals with stormwater management and flooding and new public spaces within cities.  Daniels Facutly professor Brigitte Shim was her thesis advisor for her Thesis Research Option Studio in the Winter of 2013 and her Thesis Advisor in the Fall 2013.