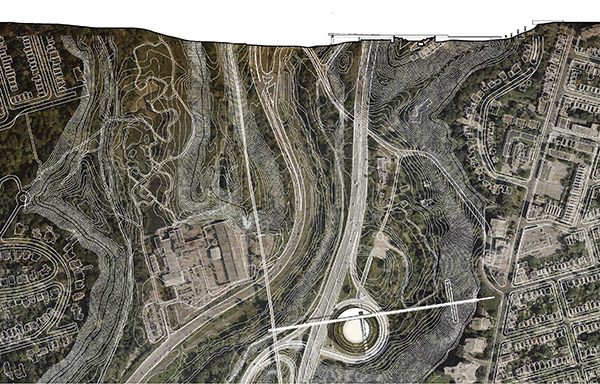 Editor’s note: This is the seventh post in a series by students at the John H. Daniels Faculty of Architecture, Landscape, and Design. Each piece features an idea for an architectural intervention that would to better connect Torontonians with their ravine system. The designs in this series were created as part of Professor Brigitte Shim’s Thesis Research Option Studio or final Thesis Studio. The work and text in this post is by Ladan Sharifpour whose bio you can find below.

With the continued intensification of cities in the 21st century, a growing desire to reduce resource consumption, and rising land values within urban areas, this project seeks to identify and utilize opportunities created by our network of road infrastructure. It explores the idea of transforming “leftover land” created by highways into highly reproductive landscapes.

The site for this project is in the heart of Toronto along the Don Valley Parkway, a highway that connects northern part of the city to its downtown core. The most unique character of this highway is its location: Toronto’s Don Valley Ravine.

The Don River valley and parkway has divided city dwellers. David Hulchanski identified three sub cities, which surround the valley. These sub cities include the high income city and the middle income city (from the Bloor viaduct to Millwood Rd). The lower land in the Don Valley is home to urban nomads who have claimed land where there is an absence of permanent dwellings. 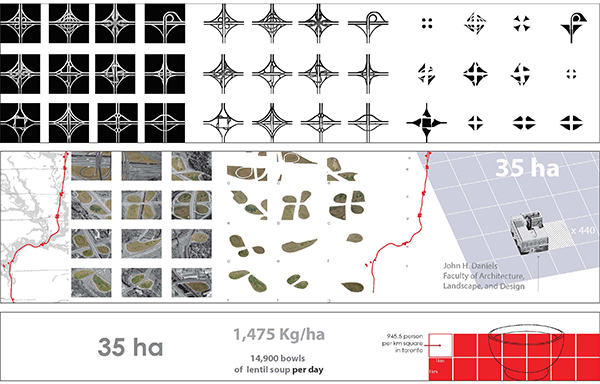 Highway infrastructure has formed shameless spatial compositions and dysfunctional voids in cities (unused pieces of land isolated by highway exits or turn offs). These urban voids, or islands, created by the construction of the Don Valley Parkway equal 35 hectares. Rather than trying to demolish and reshape the infrastructure, we could consider appropriating the land within these voids.

If these lands were to be used for agricultural purposes, they could harvest a volume of produce to feed large areas of our city. These pieces of leftover land are vast (each covers more than 1 hectare), low in value, and located within an urban metropolis — qualities that directly respond to the major obstacles often found to creating productive land in urban areas.

Transcultural spaces
Transforming these “islands” created by the Don Valley Parkway into productive landscapes could engage various social and community groups. Planting gardens on these sites could provide jobs for people with limited resources and increase the broader community’s access to healthy food.

The project is envisioned as three phases. 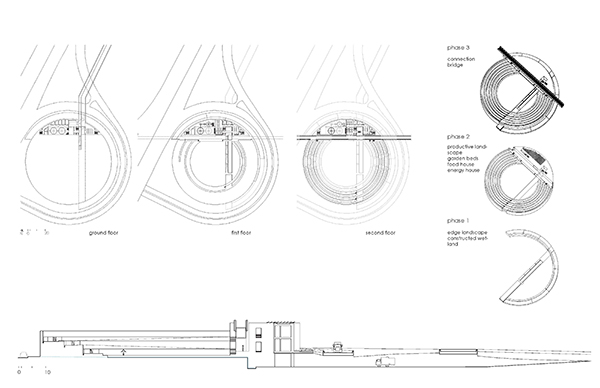 Phase 1: A marker of change
The first phase of this project would be to build a landscape component: a constructed wetland that filters the highway runoff through a stepped landscape. The filtered runoff would be stored in a reflecting pond within an event space in the gardens. This landscape component will be what drivers see from the highway.

Phase 2: a community connector
In this phase, stepped gardens would be built along with a “energy and food house.” Communities surrounding the Don Valley would be engaged in the production of food. Relationships with similar facilities and organizations, such as the nearby Evergreen Brickworks, would be established. (One of the main drivers in selecting this site is its adjacency to the Evergreen Brickworks.)

The use of a gabion wall as a retaining wall is a common method in the valley. A rain water collection system would be integrated along with a solar energy harvesting system. The water collected in this system could be used for irrigation or, with further filtration, could be used as palatable water for the food house. The food house is comprised of a community kitchen, food processing spaces, storage space, a café, and a commercial kitchen. It would be a self-supporting entity. 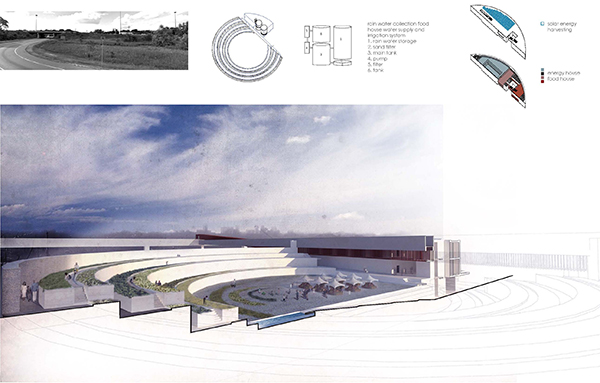 Phase 3: Physical Connector
The last phase in the development of these islands would include a physical connection from the east to the west of the valley. This would address the Don Valley’s lack of connectivity, separating east and west city dwellers, and accessibility, which isolates the valley from the rest of the city.

The existing Don railroad was another important factor in the site selection process as it spans over half of the valley and has the potential to be used as part of the physical connection. The two deep steel beams and series of cross bracing in the existing bridge support the load of the rail track and trains above; the new bridge would deal with a reverse condition. Deep beams of the new bridge would span over Don Valley Parkway, and the rigid steel frames in between the two beams would respond to the lateral loads. 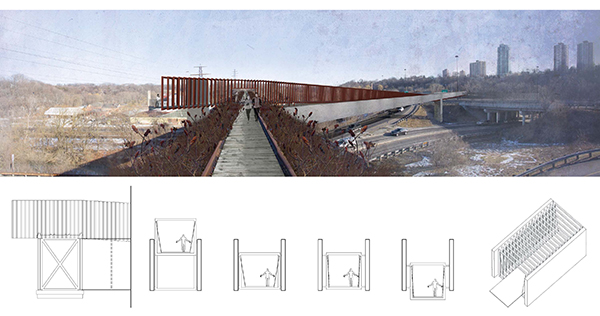 Ladan Sharifpour is a recent graduate of the Daniels Faculty of Architecture, Landscape and Design at the University of Toronto.  She is currently establishing her own practice in Tehran, Iran. Daniels Facutly member, Professor Brigitte Shim was her thesis advisor for her Thesis Research Option Studio in the Winter of 2013 and her Thesis Advisor in the Fall 2013.