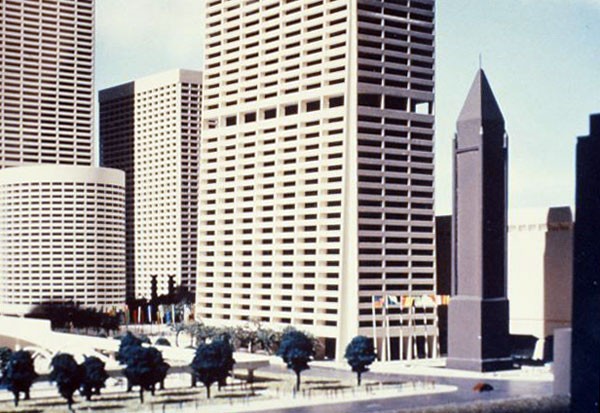 Early plans for the Eaton Centre called for the demolition of most of Old City Hall. City of Toronto Archives, Series 1465, File 420, Item 13.

Ever since Toronto city council moved over the street in 1965, Toronto hasn’t quite known what to do with Old City Hall. The exquisite heritage structure has languished as a court facility and police office—two distinctly unwelcoming uses—for more than five decades. Many of its best features, including the clock tower, are off-limits to the public.

With the courts set to move to a purpose-built facility some time in the next six years, the city is once again trying to figure out how to extract meaningful use from the building.

This week, a report to the city’s Government Management Committee suggested converting the former civic headquarters into a shopping mall. The stores could be selected based on a theme, such as technology and innovation, or “the best of Toronto,” the report said.

It might sound unimaginative, but we’re lucky to still have Old City Hall. In 1965, Toronto came within a hair of demolishing the whole thing. 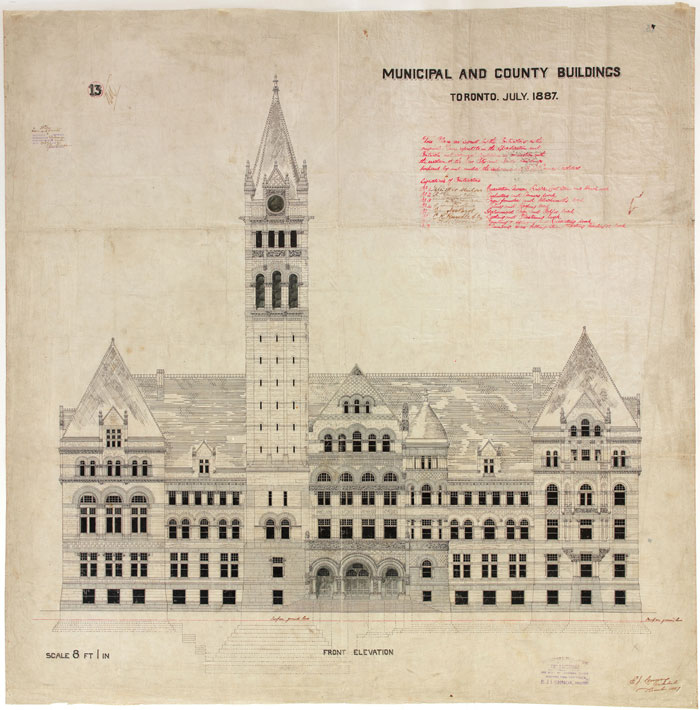 E. J. Lennox’s plan for Toronto City Hall in 1887. Some revisions were made, most notably at the top of the clock tower. City of Toronto Archives, PT 365-13.

Old City Hall was completed in 1899 to plans by architect E. J. Lennox. Romanesque Revival design was popular at the time, and so Lennox included an array of arches, columns, and decorative brickwork typical of the style. He designed the grand clock tower with its 900-kilo gargoyles, the marble-lined main hallway, and even cheekily wrote his name on the upper part of the Bay St. facade.

The building served as the City of Toronto’s municipal headquarters until 1965, when New City Hall opened across the street. After the bureaucrats moved out, the Lennox structure was almost immediately threatened with destruction.

The T. Eaton Co. unveiled plans in March, 1966 that called for the demolition of almost everything in the block surrounded by Dundas, Bay, Yonge, and Queen, including most of Old City Hall. Only the clock tower, cenotaph, and Holy Trinity Church would remain.

In their place would rise three office buildings (one 32- and two 57-floors) with room for a workforce of 65,000, a cylindrical 500-room hotel and convention centre, and a 69-floor apartment and office tower, which, at 277.3 metres, would have been roughly the same height as today’s Soctia Plaza.

Eaton’s also planned to build a new store at the corner of Queen and Yonge in the concrete box style of Yorkdale Shopping Centre.

The whole thing was projected to cost $260 million ($1.8 billion in today’s money). $8 million of that was set aside for the purchase of Old City Hall. 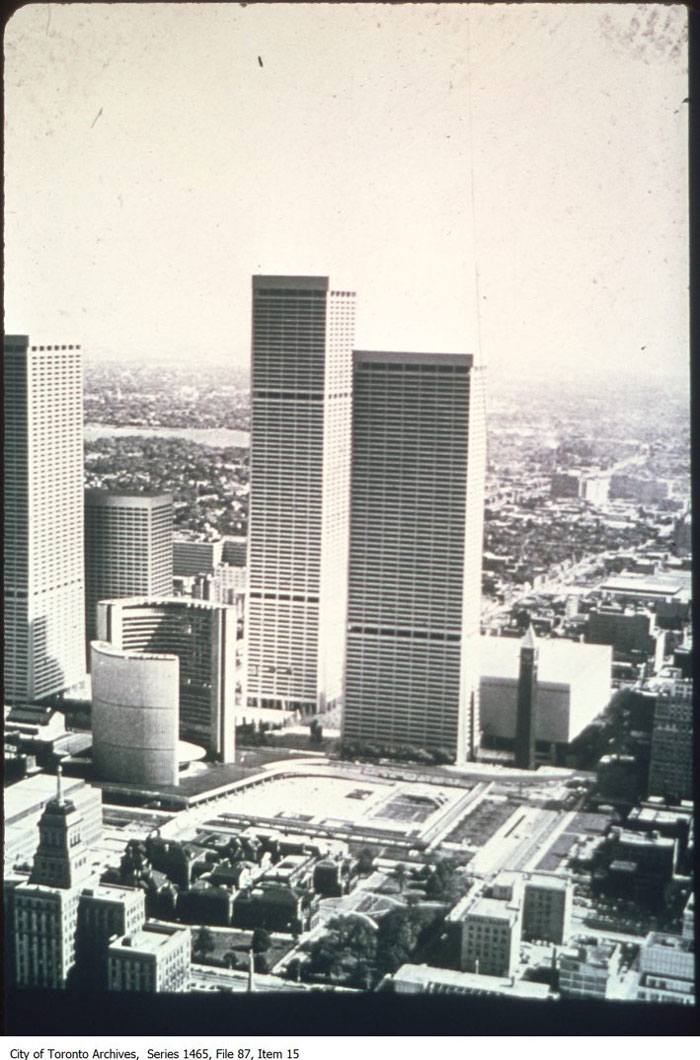 Generally speaking, the plan to sweep away a large portion of downtown was met with approval.

The Star declared the Eaton plan would “rebuild downtown.” Toronto mayor Philip Givens predicted it would exceed Rockerfeller Centre in New York in size and scope. Project architect Douglas C. Haldenby said the plan would bring back “the vitality and élan” of the city.

“Without this the downtown becomes only a place to work, dark at night, a half city,” Haldenby said. “Eaton Centre will create the full life for Torontonians and bring to the city a physical image that in a few years will be known throughout the world.”

Toronto modernist architect Harry Kohl, who, according to the Star, once likened the idea of keeping Old City Hall to preserving a baby’s diaper, was insistent the old building make way. “It isn’t great enough to justify its existence … [it’s] a monstrosity of wasted space,” he said.

On the other hand, noted architect, preservationist, and author Eric Arthur thought keeping just the Old City Hall clock tower was an insult. “I regret very much the loss of the old building,” he said. “I regret even more keeping the tower. It is the last indignity to the old building.”

An ad-hoc preservation group was established to try and save the historic building from the wrecker, but it ultimately failed in June, 1965, when Metro Council voted in favour of selling the building to Eaton’s.

As author Mark Osbaldeston recalls in Unbuilt Toronto, a deal to reduce the height of the tallest building in the complex so it wouldn’t overshadow New City Hall resulted in a significant change of plan: all of Old City Hall, including the clock tower, would be offered up for demolition. Just the cenotaph was expected to remain.

The city and Eaton’s still needed to negotiate the sale price for Old City Hall and the five streets that were to be permanently removed, but Eaton Centre looked to be a done deal.

Then suddenly, in May 1967, the T. Eaton Co. abruptly pulled the plug. 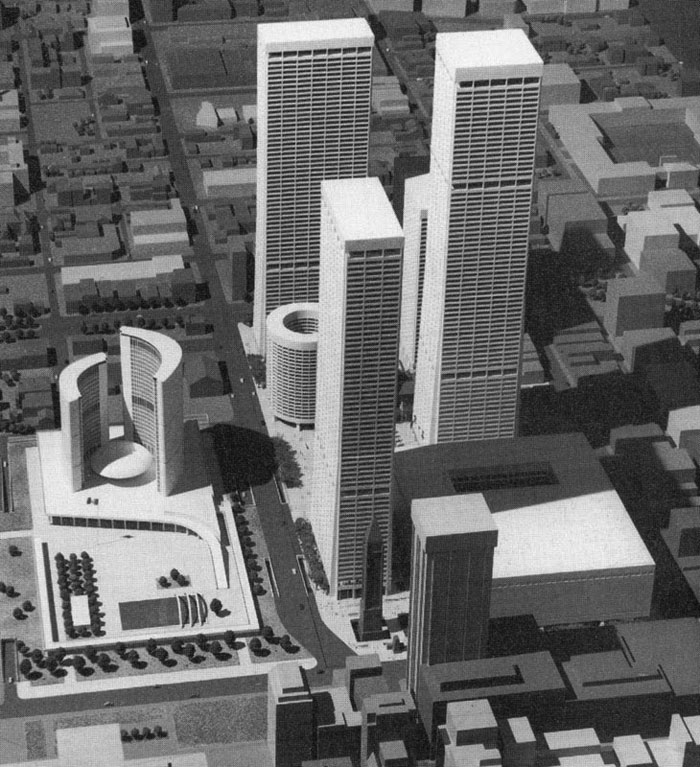 A closer look at the Eaton Centre’s proposed treatment of Old City Hall.

“The Eaton’s withdrawal broke like a bombshell yesterday when two officials of the company told [Metro Toronto chairman William] Allen—without any previous hint—that the 22.5-acre project would not be built because it had been made economically unfeasible by financial demands, red tape, and lack of solid community and municipal support,” the Star reported.

Politicians scrambled to resurrect the project, but it was too late. The first version of the Eaton Centre was finished. By virtue of the retail giant backing out, Old City Hall was saved from the wrecker.

The Eaton Centre resurfaced in the 1970s, roughly in the form it appears today, with limited development west of James St.  In 1972, much of the usable space inside Old City Hall, including the old council chamber, was rented out to the provincial courts.

For a while, the lobby housed the city’s first traffic computer, a hulking machine that used punch cards and real-time data transmitted via telephone line to calculate traffic light timings.

For the last 50 years—roughly half of Old City Hall’s life—the building’s lavishly decorated halls have mostly been off limits to the public. Metal detectors at the main entrance screen people arriving for court appearances and it’s only during the annual Doors Open festival that most get a glimpse inside without being frisked.

Fingers crossed, whatever happens to Old City Hall, hopefully it’s something everyone can enjoy.