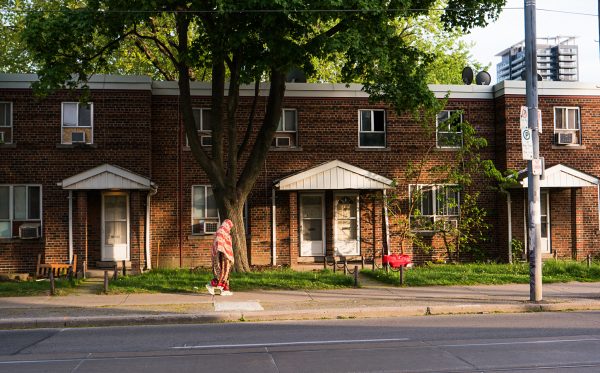 Farewell Oak Street, produced by the National Film Board of Canada in 1953, presents a before-and-after picture of the Regent Park development in the 1950s. The film, which was used as a propaganda tool by the Housing Authority of Toronto to gain support for the slum clearance projects of the time, tells the tales of the Bennett, Tweed, Jake, and Brown families that once lived on Oak Street, south-east of Parliament and Gerrard.

The film begins with the Browns — a family of five, two parents and three children — who share their living quarters with six other families. Farewell shows the Browns cooking, eating, laundering clothing, and sleeping all in one room while also dealing with the vermin found in the area. Aging and malfunctioning infrastructure, pests, and ever-increasing crowding were also a common sight on Oak Street. These were some of the factors that led to the neighbourhood being characterized, in the film, as “not quite a slum, but close.”

As living conditions worsened on Oak Street and the surrounding area, plans emerged to address the city’s housing shortages. Previously, low-income families had to share their living quarters with boarders in order to be able to afford their homes, food and other expenses. In the proposed Regent Park, families like the Bennetts, Tweeds, Jakes, and Browns would be able to afford homes with bedrooms for each family member, a kitchen, and living spaces thanks to newly-built infrastructure and rent-geared-to-income housing units. 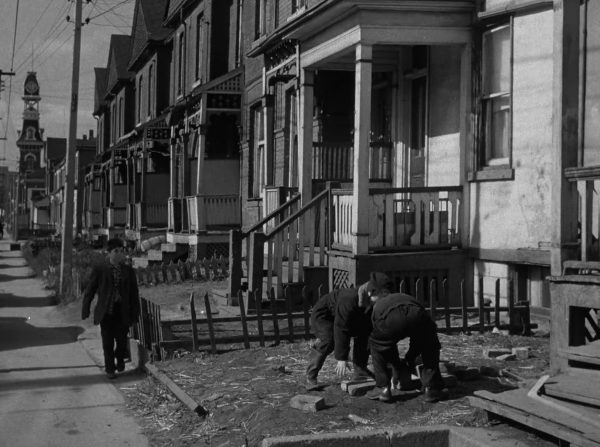 Regent Park, then branded as a modern public housing development that offered its residents “privacy, light and space,” was the City’s response to living conditions in Cabbagetown South. Studies on housing conditions in the Cabbagetown and Moss Park areas, conducted by Ontario Lieutenant-Governor Herbert Bruce and his committee in 1934, proposed the demolition of substandard homes with new public housing units. Public policy and housing betterment discourses of the time largely argued that by recasting the built form, the lives of residents in the new Regent Park would be socially, economically and morally transformed. Farewell Oak Street used film and photographs to illustrate what the outcome of the new development could be, albeit in a manicured and over-simplified manner.

Some 30 years later, the narrative that once described Oak Street as “one of Toronto’s oldest streets, and not one of its best” began to re-emerge in the once highly praised Regent Park.

Over time, negative stereotypes had emerged about the neighbourhood. They characterized the community and its residents as dangerous, blighted, and crime-ridden.

Beginning in the mid-2000s, the revitalization efforts of Toronto Community Housing, the City of Toronto, and Daniels Corporation, which are currently making progress on Phase 3 of the project, have attempted to re-brand, or de-stigmatize, the Regent Park community through its implementation of a social mix/urban renewal strategy.

But have these efforts to re-brand the community through the social mixing of residents actually worked?

Several goals were established at the beginning of the redevelopment project that were intended to help improve housing conditions in Regent Park. Among these were reconnecting the neighbourhood to the surrounding street grid, demolishing and reconstructing all buildings and townhouses in Regent Park, and, most importantly, deconcentrating poverty by implementing a social mix model in the redevelopment (i.e. creating both subsidized apartment buildings and market condos within the area).

The social mix model — which seeks to combine residents from different socioeconomic, ethno-racial and housing tenures — has been successful in altering the narratives associated with the Regent Park neighbourhood city-wide.

According to our evaluation of news media accounts of Regent Park since the 1970s, there has been a large shift in the discourses used in articles reporting on the neighbourhood over the last decade.

In the 1980s and 1990s, terms such as “drug-infested,” and “ghetto,” as well as Mayor June Rowland’s infamous description of Regent Park as a “crack capital,” were used regularly to describe the neighbourhood and its residents.

But our analysis shows that a shift has occurred since the beginning of the redevelopment in the mid-2000s, with such narratives not as commonly present in the media. Reporting now largely focuses on the logistics of revitalization, perceptions of, and attitudes toward, the redevelopment, and the effects of the project on Regent Park community members.

Yet can we assume that the City’s attempts to “re-brand” Regent Park by implementing a social mix model have been successful? And does this new public image align with the lived experiences of the pre-revitalization residents of the neighbourhood?

The social mix model assumes that by de-concentrating poverty, public housing residents will benefit from cross-class interactions. Such interactions are often said to provide low-income residents with opportunities for upward social mobility and increased social capital.

Existing research, however, does not support these assumptions. In 2017, a study conducted by researchers at the University of Alberta and Ryerson University examined how cross-class interactions occurred on the ground in Regent Park. Sixty individuals who lived in Regent Park during the revitalization process and 50 new, middle-income residents were interviewed.

The study found that cross-class interactions were, in fact, not occurring between the two sets of residents, with the reasoning being attributed to an “us vs. them” dynamic rooted in class differences. In the interviews, some long-term community members described the influx of new residents as a process of “colonization” and “invasion.” Some residents even discussed feelings of no longer belonging to the community, as previously-existing social norms were disrupted — an effect of a process known as “affective displacement.”

One of the consequences of affective displacement is that residents experience a loss of sense of place due to changes to both the built environment and existing social norms – a response which has been reported among some long-term residents of Regent Park. 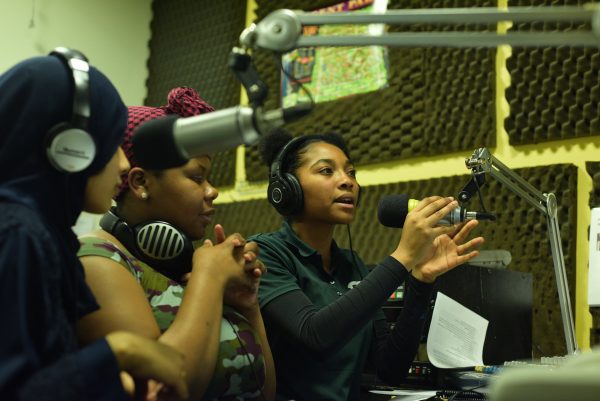 Regent Park Focus is a community media arts centre established in the neighbourhood in 1990. Through a variety of programs, the organization seeks to empower marginalized residents and underrepresented groups in Regent Park to combat negative stereotypes associated with the neighbourhood.

Since 2019, the Diva Girls at Regent Park Focus, a workshop group that explores issues through creative arts and media production with young women from the neighbourhood, partnered with Dr. Aditi Mehta and students at the University of Toronto. In this partnership, young women from the Diva Girls have worked with students to create media projects about Regent Park and their lived experiences in the neighbourhood.

In the first year of the partnership, the projects focused on the effects of revitalization on the young women and other members of the community. The explored the mainstream media’s stereotypes about Regent Park; changes in the neighbourhood’s rap and hip hop culture attributed to redevelopment; access to amenities in the area; and stories of moving and displacement, and memorialization.

One of the common themes of the projects was that of affective displacement.

In an interview conducted by The Social Fixers, a group exploring the multi-dimensional histories of displacement, moving and social mixing in Regent Park, one of the Diva Girls noted her feelings of a loss of sense of place. “I don’t remember much of my childhood,” she said. “[M]aybe if nothing had changed, I would remember more.”

In a second project by Remember Regent, a group exploring themes of memorialization, another Diva Girl wrote, “Buildings were being crushed to fit more people in the community. People from outside the community came in waves but no one really talked about it. Every year with new projects our memories were pushed further and further away”.

The Legacy Leavers, a group consisting of two Diva Girls and two U of T students, created a media project that aimed to counter the narrative of stigmatization in order to show how Regent Park had a strong and flourishing community prior to the redevelopment. The project used photography and videography to show images that held meaning to the young women and quotes that discussed their lived experiences, particularly noting how the perceived benefits of social mix did not match up with the results in practice. They noted that the neighbourhood’s sense of community had long pre-dated revitalization. The redevelopment, they wrote, “just gave the community a new space to play and be seen.”

In October 2019, the documentary film, Farewell Regent, debuted, showing community-based building and resilience efforts in Regent Park. The documentary shares the stories of folks in the neighbourhood and the ongoing activism taking place as the largest public housing redevelopment in North America unfolds.

Community-based efforts to counter the narratives of stigmatization in the neighbourhood have long been present, some of which influenced the City’s intention to redevelop Regent Park in the first place. As noted in Farewell Regent, one of these efforts included visualizations of urban renewal by residents, for residents, before the City’s redevelopment plans even existed.

Through these efforts, the individual experiences of folks in Regent Park have challenged the assumption that the discourses and narratives associated with the neighbourhood have changed. In the film, one long-term resident questions processes of change by asking, “What would be the difference if you’re living in an old building or a new building? You’re a person. You’re going to change yourself. You don’t need a new building to change you.”

As the City, TCH and, Daniels continue to make progress on the revitalization, some residents have expressed concern over how their community will function over time, noting that changes have already occurred. Community building and resilience efforts in Regent Park will no doubt play out differently, but what will that `new normal’ look like? “The organized tenant body that we used to have was unified,” a former resident tells the filmmakers. “As the community is dispersed, it’s really hard to get that organized voice.”

Much like in Farewell Oak Street, Farewell Regent shares the names and faces of the very people impacted by the revitalization, only this time also exploring the difficult issues and emotions that arise as a result of a complex redevelopment process. The lived experiences of folks documented in these stories contradict the public and media narrative that the revitalization has altered the image of Regent Park and its residents. As the redevelopment process continues to unfold, we can only question if these contradictions may also exist elsewhere in the process.

Check out the second installment of this series: Coming clean on Regent Park’s Social Development Plan.