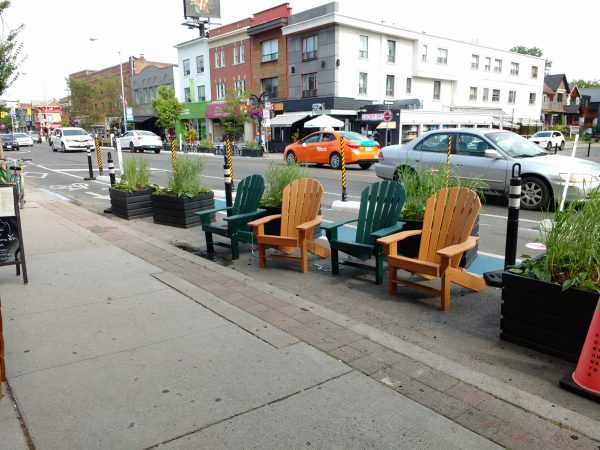 On October 27, Toronto City Council’s executive committee will get to dine alfresco on the results of an online survey about the CafeTO program, and specifically the question of whether this response to the pandemic should become a permanent fixture of Toronto’s rights-of-way, as has happened in other cities, such as New York. (Update: The staff report outlining a recommended plan for CafeTO is now available here.)

By late October, of course, no one’s going to be eating outside on these make-shift patios because, well, fall! The nights are too chilly and there’s the ever-present risk of rain. I’ve been watching as restaurants give up on these extensions for the past several weeks, in some cases dismantling them outright or, in others, holding on, but without much enthusiasm.

At City Hall, the dutiful process of consultative sausage-making predictably results in flavourless policy, and I expect nothing less – nothing more? – on this file, which, truth be told, is not exactly a hot-button social issue and only has purchase in the older parts of the city, where there’s some combination of storefront retail, narrower arterials and on-street parking.

I don’t want to pre-judge, but if I had to bet, I’d guess city staff will come up with some cautious and highly provisional articulation of the current program, with the real decision-making left in the hands of the transportation mandarins and council’s traffic obsessives.

The pandemic, as we all know, triggered contradictory spasms of public policy response from the City. On one hand, it moved with uncharacteristic alacrity to add bike and bus lanes, as well as these make-shift patios. Yet the city and the police also persisted with excessive and at times inhumane constraints on the use of public space (bathrooms, encampments, etc).

This dualism existed within the CafeTO program itself. On the plus side, it did enable restaurants to operate through a desperate period, and provided Torontonians with an alternative vision of the potential for street life in a city that has a deep distrust of public space. The province even suspended its own puritanical impulses and allowed alcohol to be served. Scandalous!

Yet I also wonder whether CafeTO was set up to fail. The rules initially prohibited canopies until the city couldn’t ignore the shouting on social media. Restaurateurs also reported harassment by bylaw enforcement officers if they strung lights over the sidewalk to add a festive note (apparently, this move represented an intolerable public safety risk). The guidelines also prohibited running power chords for lights or heaters over or across the sidewalk, so the potential for these amenities has been weather- and season-limited. 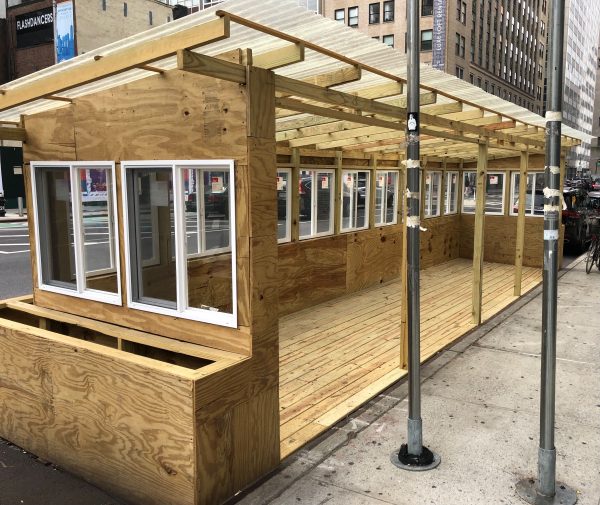 After spending the long weekend in the Big Apple and seeing how New York City has managed a similar program, I am even more convinced of the intended impermanence of ours.

NYC’s patio initiative began last year, and evolved significantly this summer to allow for covered and partially enclosed outdoor spaces. Across the city, there are thousands of wooden enclosures sitting in curbside parking spaces, each with roofs sloped out towards the street, floors flush with the sidewalk, Plexiglas windows, lights, and, often, heaters.

To anticipate the inevitable questions about air circulation, they are most definitely open, and certainly New York City, after its devastating early experiences of the pandemic, shows no indication of taking a laissez faire approach to COVID19.

At the same time, these structures do allow customers some protection against wind, rain, and cold, which means they are still very much in use now, whereas ours are mostly empty. The design guidelines were written with a light touch, and focus mainly on accessibility, fire codes and other basic regulations.

While not all these patios are great to look at, the rules offered plenty of flexibility, enough that several local organizations, including the venerable Regional Plan Association, this year established the Alfresco Awards, to recognize design innovation. The entries are pretty impressive, and certainly added new elements to the public realm. 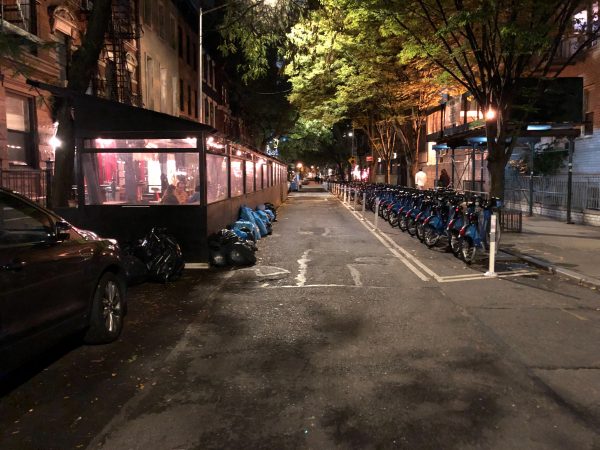 About 12,000 restaurants took part in the program overall, according to Gothamist, and Mayor Bill de Blasio has claimed they saved over 100,000 restaurant jobs across the city. New York is currently undertaking public consultations on how to improve the initiative.

Eating out, of course, is just the pointy end of this particular stick. NYC also closed streets so they became pedestrian-only access, added bike lanes and sought to enliven open spaces once the pandemic emergency receded. But that knack for street life has long been encoded in the DNA of a dense, crowded city in which the public realm is considered to be as indispensable to urban living – commercially, socially, environmentally – as housing and transportation infrastructure.

For all of Toronto’s diversity, development activity and mildly progressive political outlook, the municipality continues to engage in the pedantic and moralistic control of public space for reasons that increasingly set us apart from genuinely cosmopolitan cities. As the CBC’s Matt Galloway observed the other day, it’s still difficult to find a place to just sit and relax on a sunny day, despite everything we thought we’d learned in the past 18 months. 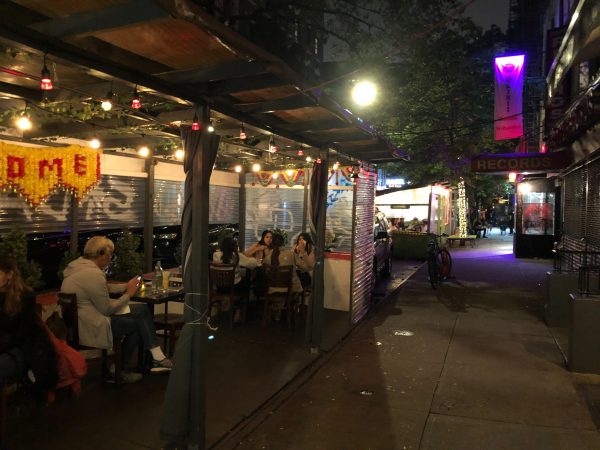 Something else struck me about NYC’s outdoor dining structures: while still fairly rudimentary, they suggest the possibility that a new type of built form is germinating in spaces once set aside for parked cars and sewer grates. I have no idea where this type of form will lead, or how it will affect street life, or, in fact, if it will be permanent.

But the fact that NYC is willing to let the experiment play out attests to the fact that urban space naturally wants to evolve in unexpected ways, to flow like water, or time. Some of the liveliest areas of New York are the commercial strips underneath the elevated subway lines that run through Brooklyn and Queens, where the sidewalks are dense with street vendors. In Montreal’s NDG and Cote St. Luc, the ground floors of post-war walk-up apartment buildings have been colonized by cafes, hair salons and other small retailers. Even Toronto’s laneways show hints of transforming into something other than mute rows of garages.

Ultimately, the pandemic story of outdoor dining has to do with so much more than the survival of the restaurant sector. It’s about re-imagining downtown arterials, allowing them to elbow aside parked cars and heavy traffic in favour of people, bikes, colour, light and street life.

The City can choose to enable this transformation or condemn it to a death by a thousand small objections. One can only hope we learned something since March, 2020.