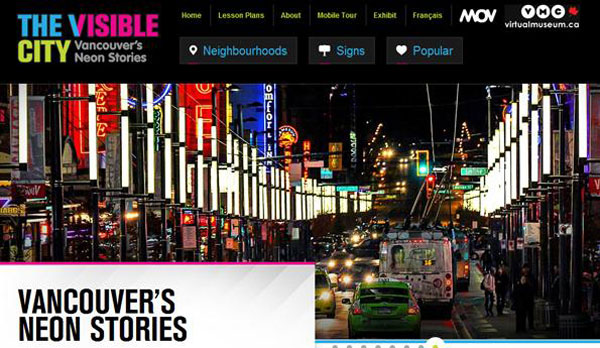 The Visible City now available for iPhone and Android

Today the Museum of Vancouver (MOV) launches the Visible City, a virtual exhibition of Vancouver’s neon history, developed in partnership with the Virtual Museum of Canada (VMC) at virtualmuseum.ca, an initiative of the Department of Canadian Heritage. In doing so it becomes the first cultural institution in North America to have taken augmented reality technology to the streets.

The Visible City is a free app and virtual exhibition that allows users to discover the rise, fall and revival of neon in Vancouver. The app provides walking tours of Vancouver’s most colorful neighborhoods and users can actively contribute to the history of 57 of Vancouver’s neon signs by uploading their own stories, sharing them with others and voting on their favorite signs and places.

“At the MOV, we consider the entire city our artifact, and the Visible City is one of those ways we can take history beyond the walls of the Museum,” explains Hanna Cho, MOV Curator of Audience Engagement. “The app is like taking a piece of Vancouver’s history around with you in your pocket – but it’s a piece of history that you can actively contribute to.”

Users can explore two digitally guided walking tours through Vancouver’s cultural heart (Granville Street) and the city’s original downtown hub (Chinatown and Hastings Street). By holding their cameras up to the present day scene, they can see the same Vancouver location appear as it did in the 1950s, 60s or 70s. Users can then listen to over 40 pre-curated stories on audio and video told by celebrated Vancouverites like Dal Richards (big band musician), Joe Keithley (of DOA), Judy Graves (City of Vancouver advocate for the homeless) and more.

The Visible City is free to download and is available via the iTunes App Store and Google Play. The Visible City gratefully acknowledges the funding support of the VMC at virtualmuseum.ca, an initiative of the Department of Canadian Heritage. For more information visit www.museumofvancouver.ca/visiblecity

The Museum of Vancouver is an independent non-profit organization with the mandate to hold a mirror to the city and lead provocative conversations about its past, present, and future.