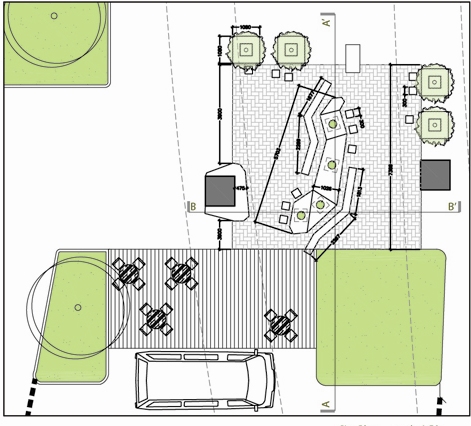 This past month, the City of Surrey unveiled the winners of PARKit, an ideas competition in which first prize was to design and build a pop-up park next to one of Surrey’s busiest Skytrain stations. The winners were awarded $12,000 to construct their design, install and open it in less than a month’s time, on July 9th.

As Mayor Dianne Watts explained the competition: “The evolution of the PARKit program demonstrates the growing vitality of City Centre and the appetite for more creative public spaces. This area has become an important pedestrian hub, linking SFU Surrey and Central City Mall with the SkyTrain station and North Surrey Recreation Centre. And it will be a fun place to be over the Summer!”

While this kind of public-private venture for improvising in the public realm is not a new notion, what makes it more unique is the nature of its temporariness. It is an enterprise that has been seen in other instances throughout Metro Vancouver recently, where unprogrammed spaces are suddenly redefined in some interesting way—one of the more recent example being the last summer’s Pop Rocks installation designed by Matthew Soules Architecture  and AFJD Studio that saw fifteen white bean bag forms, made from the old sails of Canada Place, placed on Robson street in front of the Vancouver Art GalleryAG. PARKit goes even further, insofar that it takes the new incidental uses and aligns it with something else, like a food truck program, or a major piece of urban infrastructure like Skytrain.

The playfulness of such an exercise is not unlike the work Atelier Bow-Wow who have done various experimental mobile architecture project where, for example, the contents of a bicycle and trailer can transform a parking lot into a makeshift classroom. Similarly, May’s issue of Canadian Architect features a similar design competition to PARKit in Toronto, but for the food carts themselves instead of the park beside it.

Returning to the Teflon coated urban throw cushions, now residing in the plaza outside Koerner Library at UBC, the idea that such pop-up parks could be re-used numerous times in different locations, is something Surrey could and should consider as a follow-up to PARKit.

With this in mind, a venture like this competition can only truly be called a success if it succeeds in not only building the winning entry, but repeating the model elsewhere – in Cloverdale, in Semiahmoo, and so forth. Perhaps ‘Spice Market’ could be built in the Tim Horton’s parking lot at the entry to Fleetwood, or the second runner-up in one of the corner’s of the Guildford Mall parking lot – these parks could rotate throughout the different town centres in the city over the course of the summer, providing respite for pedestrians, cyclists, and tourists at otherwise non-descript parking lots adjacent to strip malls.

Speaking with Carlos Guerrero that did the ‘Spice Market’ scheme, he stated that the idea of PARKit is an elusive one, as you are trying to make concrete a space that is in flux. Even the finished park itself will have to change, as it will eventually be disassembled at summer’s end. Their group’s focus then was on the activity at hand, the outdoor lunch room that the pop-up park would become. Their scheme also proposed a team that could wear all the hats: designer, landscaper, and contractor.

As Carlos explained:“Our objective was to create a space that transcends what Surrey is today. Surrey’s greatest gift and most precious endowment is its diversity, its people. And what do people love? Food! Food brings us together. Food is memory, comfort, and interaction. People and places change, but food remains. Celebrating the culinary diversity that thrives in Surrey emphasizes that the city is made up of a wide diversity of languages, customs, cultures, and beliefs.”

Carlos also highlighted that an important component of their scheme was its relation to the non-profit organization Projects in Place, which has provided community gardens in and around Metro Vancouver for the past six years. The competition proved to be the perfect outlet for their cause: “Bringing designers, contractors, and non-profit together with the public will reduce the project cost. And the best part is, it will be built by local residents. The Projects in Place Society has used this model to achieve many innovative community-led projects throughout the Lower Mainland.”

Surrey is one of Canada’s fastest growing cities in its class, home to an increasing number of immigrants from around the world, such that its ethnic character is changing as rapidly as its built form. What’s more, Surrey’s school board now boasts more than Vancouver’s, a certain sign that it will become British Columbia’s most populated city within two decades. For this reason alone, more park space, whether permanent or temporary, is key to creating a more sustainable, walkable city, especially when one considers the current hardscape of its roads and parking lots.

During another design competition from a few years back, TownShift, Mayor Dianne Watts said that “the City of Surrey is proud to promote innovation and original thinking. New methods of looking at old issues are essential as our City moves to become the largest metropolitan centre in BC,” words that are still as apt now as they were then. As such, the City’s planners have continued to use design competitions as a way to engage the public.  Through constructing and installing the winning proposal of PARKIt, the city will continue the dialogue pertaining to the ownership of spaces we create in the public realm, spaces like this pop-up park.

The imminent opening of this new pop-up park is sure to be a success, and a credit to the designers that entered. The winners’ designs are sure to provide the model not just for Surrey but all cities in Canada interested in shaping and transforming their environment around us, adapting to new purposes and changing with our changing times.